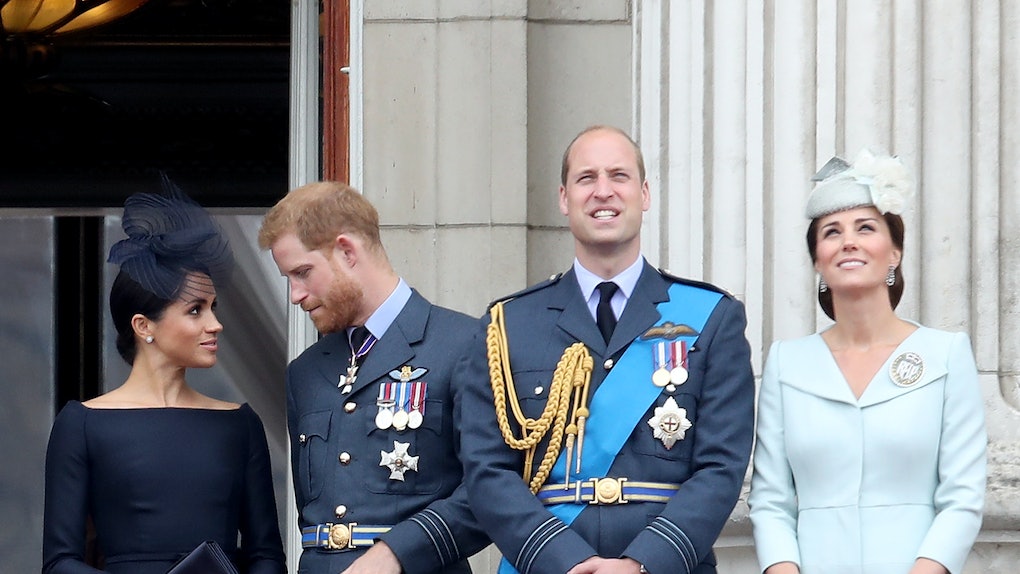 You know that cool, “older” couple you and your partner always hang out with who radiate a sort ~chill~ calm toward each other? The couple that’s been together way longer than you and your partner, and that roll their eyes when you two can’t keep your hands off each other, almost as if to say, “Calm down, you crazy kids.” That’s what I think about when I picture William and Kate’s body language at the RAF100 compared to Harry and Meghan’s. That’s not to say that Prince William and Kate Middleton aren’t still head over heels for each other — because they totally seem like it. It just looks like a significantly more lax love than the one that Prince Harry and Meghan Markle display, considering they got married a mere month-and-a-half ago.

On July 10, the British Royal Family gathered on the Buckingham Palace balcony to watch a flypast in celebration of the Royal Air Force’s 100th anniversary. There was also a service at Westminster Abbey (where William and Kate tied the knot in 2011), and a ceremony called the Presentation of the New Colour, where the Queen presented the Air Force with new flags, or “colours.” All the big players were in tow, including the Duke and Duchess of Cambridge (Will and Kate) and the Duke and Duchess of Sussex (Harry and Meghan).

As we know, the Royals aren’t too keen on showing that much PDA, but the addition of Meghan Markle to the family has given us, the grateful public, a wealth of sweet little moments here and there between her and Harry. There may be a few reasons why she and Harry show more public affection than Will and Kate. Many say it’s because Will is more directly in line to the throne than his little brother, so he and Kate need to be a little more professional around cameras. That’s not to say they don’t ever embrace, though! They recently welcomed their third child (Prince Louis) a few months back, and looked like gold shining stars (literally) when they left the hospital. But Harry is probably never going to be king, because he’s literally, like, sixth in line behind his nephews and niece. Basically, he’s cruising, so he can hold Meghan’s hand in public and not be shy about it! A concept!!

Then again, Will and Kate have been dating since at least 2004, and married since 2011. They have three kids and have attended countless royal engagements and fancy events. By contrast, Meghan was officially referred to as Harry’s girlfriend for the first time in November 2016, and they were married less than two years later, in May 2018. They have no kids and have been in the public eye significantly less than Will and Kate have. Maybe, since their love is so much “newer” than Will and Kate’s, they’re more vocal about it. Maybe Will and Kate are just tired, as parents with a newborn baby tend to be sometimes. Whatever the reason, it’s interesting to compare the body language between the two couples — who are part of the same family, live in the same palace, and spend tons and tons of time together. I reached out to body language expert Lisa Mitchell for her take on what the key differences between the couples and their body language might mean at the RAF100 celebrations in London today. Here’s what she had to say.

There's a big difference in the amount of space between the couples.

Mitchell points out that there's a "noticeable difference" in the amount of space between William and Kate versus Harry and Meghan. You can clearly see that Meghan and Harry's bodies are touching, whereas Will and Kate have at least a few inches between them.

"Based on the duration of their relationships and the comfort level with their current roles, I'm not surprised that Harry often offers a reassuring or more protective stance in regards to how close he stays to Meghan," Mitchell tells Elite Daily. "Kate has been in the highly-public position longer and exhibits a higher level of comfort and confidence because of that, she is quite literally comfortable standing on her own in these important situations."

As Mitchell points out, the difference in their body language might literally have nothing to do with the dynamic of their relationships. It really could just be that Kate is a bad b*tch who doesn't need Will to comfort her anymore. She's got it under control, thank you very much, whereas Meghan (who's a bad b*tch in her own right) is new to all this stuff. Harry's closeness probably makes her feel a little more comfortable in front of, oh, you know, millions and millions of people watching all over the world!

This one time, at a college formal, I had to literally hold onto my date for dear life as I wobbled over a cobblestone entryway in very high heels. This could very well be what Meghan is doing in this photo. I mean, look at those pointy-toe shoes!

Kate, on the other hand, walks alone, in similar shoes, on the same kind of cobblestone — so maybe it's not the heels. Maybe, as Mitchell points out, Kate is just more comfortable.

"Unlike Kate, Meghan often looks to Harry for additional support or an arm to loop her hand through," Mitchell says. "This is a comfort gesture that helps her to feel more protected and guided through situations, which you would expect with her still walking into so many new and daunting environments with such heavy public interest and scrutiny. Kate exhibits self-assuredness by walking directly and independently into those same venues and events, a skill that has grown over her time in the position."

But also, Meghan and Harry are just super in love right now, OK??

"Even when seated, Harry and Meghan are using their body positioning to signal engagement and interest in each other even during a formal event," Mitchell says. "Meghan crosses her leg in the direction of Harry and Harry pivots slightly to angle toward her instead of facing the crowd and photographers directly. Will and Kate are more independent of each other, choosing to face due forward and allowing plenty of space between them while seemingly perfectly content and confident in their own relationship. "

The honeymoon phase is a real thing, y'all! Meghan and Harry got married less than two months ago in a widely televised (super expensive) wedding where they looked into each other's eyes and declared true love in front of the entire world! So it's really not that shocking to see them more engaged with each other than William and Kate, who may not be as enthusiastic, but show the kind of comfort that only comes with a long, stable, happy marriage.

And if you're reading this and doubting if Will and Kate's connection is still as strong as Meghan and Harry's, even after all this time, then feast your eyes on this adorable video of Kate catching Will giggling at the RAF100 church ceremony. How's that for in-sync?