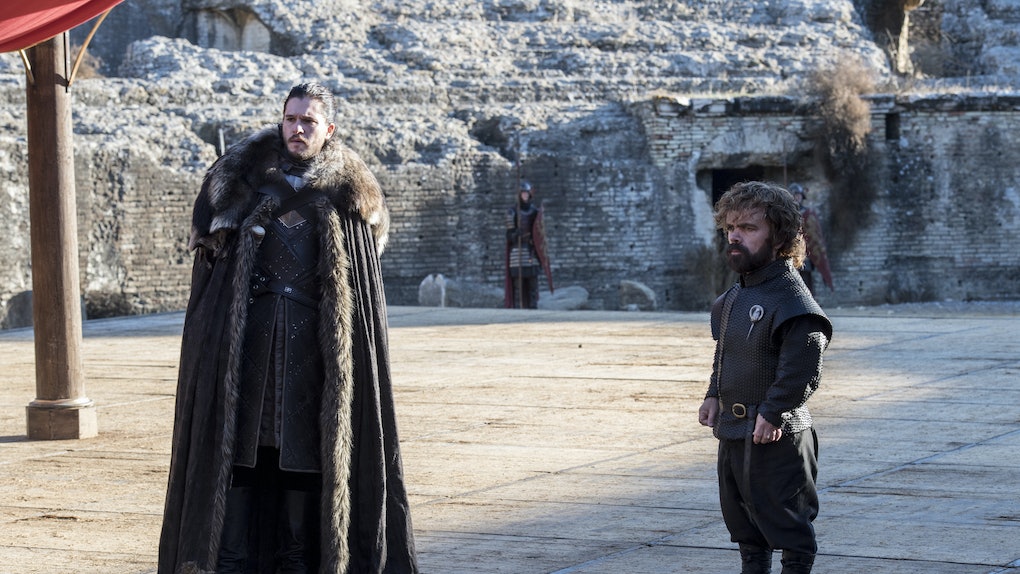 The biggest shock of Game of Thrones Season 7 wasn't the hook up of Daenerys Targaryen and Jon Snow, nor was it the revelation of Jon as a Targaryen. (Though, admittedly, few saw coming he was the legit heir to the throne or his name was Aegon.) It was the death and resurrection of Viserion, Dany's beloved dragon, taking away the possibility Tyrion was the third rider. But what if he still is? Will Tyrion become the Night King to ride a dragon?

Fans should hand it to Game of Thrones Season 8. After years of on-set leaks, spoiled scripts, and pirated episodes, it looks like the show finally got a handle on security when it counted. Game of Thrones' final chapter is basically a locked box, with no one able to guess what's inside.

But what if they're all wrong? What if it's Tyrion who defeats the Night King and takes his place?

According to one Redditor, there are too many hints from the books to disregard Tyrion as a dragon rider just because the dragon now breathes ice instead of fire.

Now with that done, frequently throughout the books its been hinted that Tyrion will ride a dragon with some decent supported hints that he might be a Targaryen bastard from Aerys the mad king. Specifically its hinted that Viserion is the one he'll ride, from Viserion getting a symbolic hints that he is connected to lion and gold (aka Lannisters), named after the only known living brother of Daenerys (if Tyrion is a targaryen bastard he'd be her only currently living sibling as a half brother), being the smallest and both the wisest (its indicated he understands people around him more than the other two dragons) and the least aggressive (similar to how Tyrion prefers to talk things out than to resort to violence), and that's not to mention specific hints from Tyrion to connect to him.

Now, this theory tries to end on a happy note, suggesting Tyrion might save Viserion. But fans are pretty sure this is not in the cards. Instead, making Tyrion the third dragon rider would mean displacing the current one.

The issue on the table is the Night King is immortal, and therefore impossible to kill, at least, not without someone taking his place. Having Tyrion be the one to make the ultimate sacrifice to fulfill his dream of having his own dragon would be a bittersweet ending for sure. Imagine him riding away with Viserion to the far reaches of the north, never to be seen again, leaving behind Dany and Jon to build the new world together.

Viewers will find out if this is how the show ends come 2019, when Game of Thrones Season 8 arrives on HBO.

More like this
TikTok's #NotTheMainCharacter Trend Shows The Supporting Role You Connect With Most
By Marisa Casciano
These Theories About Annabelle On 'Cruel Summer' Will Make You Think
By Rachel Varina
'Grey's Anatomy' Season 18: Premiere Date, Cast, Trailer, News, & More
By Abby Monteil
Stay up to date