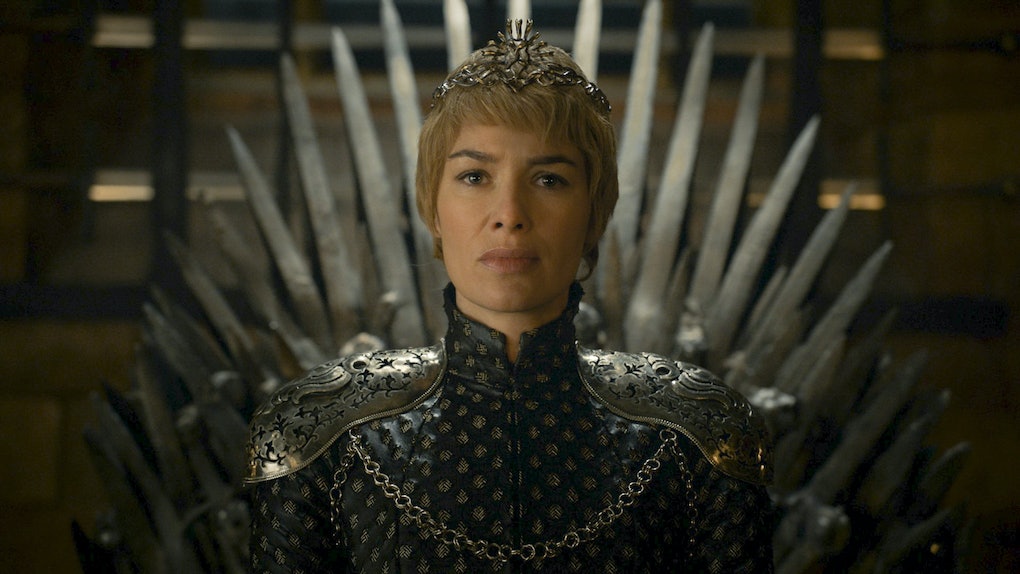 Will Cersei Become The Night Queen? This 'GOT' Season 8 Theory Is Eerily Convincing

It's only a couple of weeks before the one-year anniversary of the Game of Thrones Season 7 finale. Fans knew from the beginning the wait between Season 7 and Season 8 would be somewhat akin to the Long Night, with filming not beginning until late in 2017 and a premiere date revealed to not be coming until 2019. But the one-year mark seems to be preying upon minds more than usual, and new theories are starting to crop up. The latest is an interesting angle: Will Cersei become The Night Queen? She's already taken over the moniker of the Mad Queen... could cold, blue eyes be far behind?

Cersei as a wight, or as a White Walker, isn't out of the question. Unlike everyone else who attended the Dragon Pit conference, Cersei didn't take the threat from north of The Wall all that seriously. Sure, she was shaken by the sight of the wight, but she recovered and quickly convinced herself this was not a threat King's Landing needed to worry about.

Her attitude drove her brother Jaime away — he was so appalled by her willingness to let most of the continent die just to become the sole surviving ruler. With little to defend her, it would surprise no one if the Night King came to the King's Landing gates, let himself in, and lead a blue-eyed Cersei away, pale and ice cold, never to have the baby in her womb.

But a new Reddit theory has come up, one suggesting a slightly different outcome: What if the army of the living in Westeros loses, and the finale is Dany leading the survivors to a new land in Essos because Cersei now rules as the Night Queen?

What if the GoT finale would see everyone leaving Westeros and finding a safe place in Essos, where Daenerys is the only Queen? We know from the last episodes that the dead and the white walkers cannot swim (except the ones who rescue the dragon from the bottom of the frozen lake for tying the chains). Therefore, it may be possible that the humans will lose the war with the Night King, who will destroy all the seven kingdoms, including Kings Landing (and probably Cersei Lannister). The theory is that the Champion of the Light will probably sacrifice himself [in order for] the others to escape the continent. The last scene would be Cersei opening her blue eyes as the Night Queen… Is this a reasonable finale?

If fans are looking for a depressing finale, it would certainly fit the bill. Jon Snow dies again, sacrificed in vain. Cersei gets her greatest wish, to rule the Seven Kingdoms, but as an Ice Queen of a world of death. Dany leads a small band of survivors to... where in Essos? Old Valyria, maybe?

On the other hand, an ending like this would explain why, when it came time for HBO to create a spinoff, sequels were out of the question.

Fans will find out the truth behind the ending when Game of Thrones Season 8 arrives on HBO in 2019.

More like this
'House Of The Dragon': 'GOT' Spinoff Cast, Release Date, Filming News, & More
By Ani Bundel
The 'Cruel Summer' Season 1, Episode 5 Promo May Hint At That Mirror Theory
By Rachel Varina
This Reddit Theory About June In 'The Handmaid's Tale' Season 4 Is So Creepy
By Ani Bundel
Stay up to date