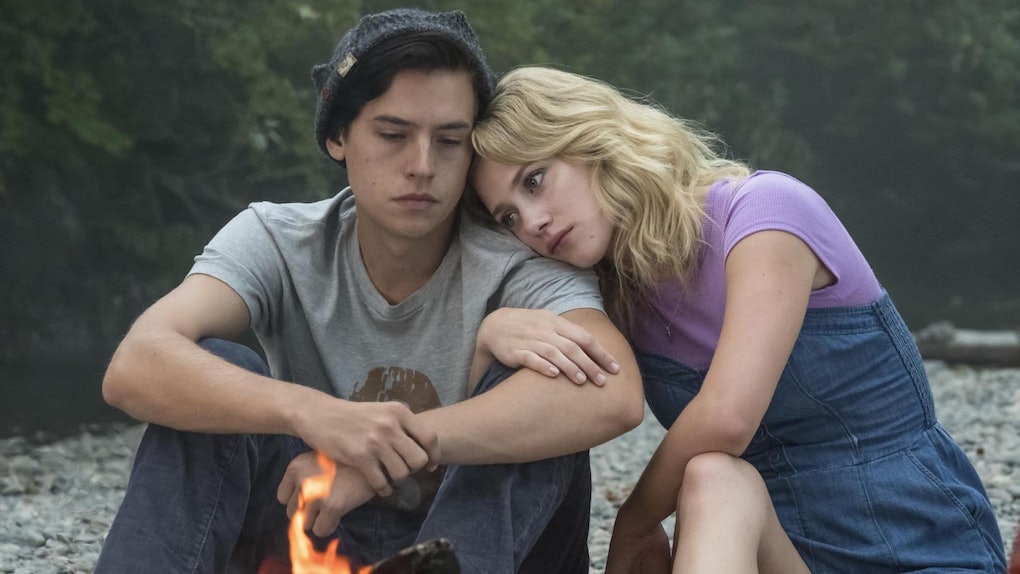 Will Jughead & Betty Break Up In 'Riverdale' Season 4? Fans Are Wondering

The latest Hollywood breakup rumor could also mean major changes for Riverdale, at least that is what some fans are worrying about. After reports that Cole Sprouse and Lili Reinhart ended their two-year relationship surfaced after 2019's SDCC, now every Riverdale fan is wondering the same thing: Will Jughead and Betty break up in Riverdale Season 4? The two have actually spoken a bit about the romantic futures of their characters in the new season.

Riverdale fans were hit with a bombshell over the weekend when Us Weekly reported Cole Sprouse and Lili Reinhart had broken up, reporting that multiple sources confirmed the breakup to the publication after the pair avoided one another at a Comic-Con afterparty. Elite Daily reached out for confirmation on their breakup but did not hear back by publication.

Up to that point, the two Riverdale stars had been dating one another for two years, beginning just after the show's first season had finished airing. While the breakup rumor persisted for several days, both Sprouse and Reinhart finally responded on Thursday afternoon by unveiling their cover of W Magazine. Both stars posted Instagram comments stating that Us Weekly's report was false, implying that they are still together.

Check out both Instagram posts, which shade the "reliable sources" that stated Sprouse and Reinhart had broken up, below:

While that breakup rumor may be squashed, there is still the lingering question of whether this rumor may be indicative of Cole Sprouse and Lili Reinhart's Riverdale characters in the upcoming fourth season of the show. Jughead Jones and Betty Cooper have been dating on Riverdale since the end of Season 1, forming the fan-favorite relationship Bughead. And unfortunately, it sounds like Bughead is going to go through some struggles in Season 4.

Lili Reinhart and Cole Sprouse teased where the relationship between Betty and Jughead may go in Season 4 during the Riverdale panel at Comic-Con this weekend. While both actors agreed that Bughead will be going strong at the beginning of the season, the big obstacle standing in the couple's way will be Jughead leaving Riverdale High to attend a prep school. Reinhart said that Betty is supportive of Jughead's decision to take a writing scholarship to this new school, but it does mean that she only gets to see Jughead over the weekends.

Cole Sprouse added that he could see the show introducing some sort of offbeat manic pixie dream girl character at the prep school who could tempt Jughead into rethinking his relationship with Betty. This storyline would mirror a similar arc from Season 2, when Jughead left Riverdale High to attend Southside High and fans were convinced that he was going to enter into a relationship with the newly introduced character of Toni Topaz. Of course, that did not wind up happening, and now Toni is happily dating Cheryl Blossom.

Oh, and let's not forget the biggest question mark affecting Bughead in Season 4: that flash-forward from the Season 3 finale that seemed to be hinting at Jughead dying halfway through the new season. Not to mention the uneasiness of the fact that they just met a sibling that they both have in common. Riverdale Season 4 will premiere on the CW on Oct. 9.

More like this
Why Isn't 'This Is Us' Airing On April 20, 2021? Season 5 Is On Another Break
By Ani Bundel
These Fake 'Riverdale' Brand Names Are Even Better Than The Real Thing
By Rachel Varina
'Ginny & Georgia' Season 2: Release Date, Cast, Trailer, & More Info
By Dylan Kickham
Stay up to date