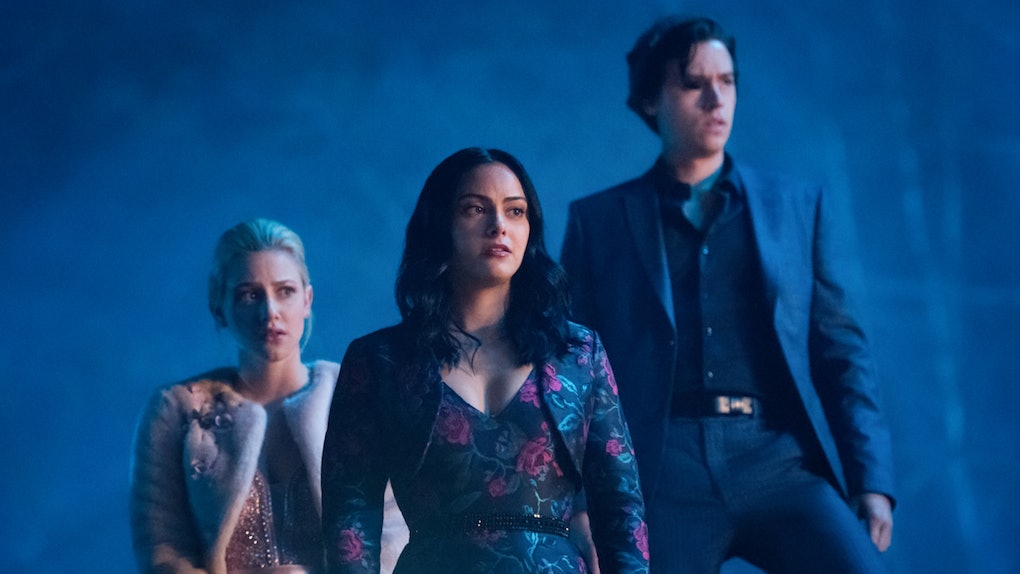 Will Jughead Die In 'Riverdale' Season 4? The Season 3 Finale Has Everyone SUPER Concerned

Surprisingly, the most shocking moment from the Riverdale Season 3 finale did not have anything to do with the Gargoyle King or The Farm or the seemingly endless supply of other quasi-supernatural mysteries that have been plaguing the town throughout this season. Although the finale did give fans a lot of answers, it also ended with an incredibly cryptic scene nobody saw coming, which left fans with so many questions. Spoiler alert: This post contains spoilers from the Riverdale Season 3 finale, "Survive the Night." That sudden flash-forward has everyone wondering will Jughead die in Riverdale Season 4. This is not the first time the show has teased Jughead's possible death, but it is hard to interpret the mysterious scene in any other way.

The scene that has every Riverdale fan freaking out right now came at the very end of Wednesday night's Season 3 finale. After Archie, Betty, Veronica, and Jughead successfully made it through Penelope Blossom's deadly obstacle course — revealing that she was the Gargoyle King mastermind all along while Chic was the one wearing the costume — the core four relaxed together at Pop's, proposing a milkshake toast that they would have a safe and boring senior year devoid of serial killers and mysterious cults. But obviously, all the fans know that is so not going to happen.

In fact, the show confirms that the next season will be just as bloody and mysterious as ever right then and there. Immediately after the toast, Riverdale hits us with the show's first ever flash-forward, jumping to spring break of the gang's senior year at Riverdale High. And it definitely looks like the worst spring break ever. The flash-forward shows Archie, Betty, and Veronica covered in blood, standing in only their underwear in front of a bonfire in the woods, all clearly shaken by some recent event.

While Archie and Veronica look traumatized, Betty is the only one able to speak, and she tells her friends to burn their clothes and never speak of what happened or else they might get caught. Notably, Jughead is absent from this mysterious meet-up, and Betty also makes sure to mention that they need to burn Jughead's beanie along with the clothes.

The implication seems very clear: Jughead must have just been killed somehow. And the way that Betty is talking about wanting to avoid being caught also seems to suggest that she, Veronica, and Archie may have even been involved in his death in some way. I mean, they are covered in blood...

But would Riverdale really kill off one of its main characters? That is the question that looks like it will be at the center of Season 4, which the CW has already picked up. As of right now, it is anyone's guess what might happen to Jughead — the flash-forward scene does clearly seem to suggest he will die, but then again, Riverdale loves to keep things super cryptic and the show will likely be apprehensive about killing off a lead role. If it follows the production cycle of past seasons, then fans can expect Season 4 to premiere this October, which means we will get more information about Jughead's fate in a matter of months.

More like this
When Will 'Riverdale' Season 5 Return In 2021? Its Mid-Season Break Is Long AF
By Rachel Varina
'All-American' Star Samantha Logan Is Putting Herself First
By Rachel Varina
'Elite's Season 4 Release Date Teaser Introduces The New Cast Members
By Abby Monteil
Stay up to date