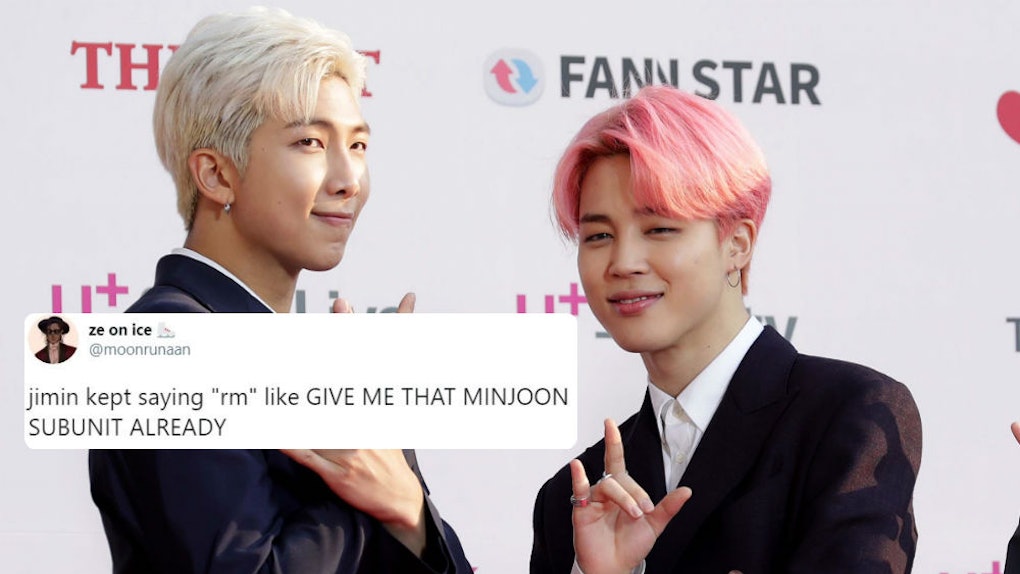 Will Jimin & RM Have A Subunit Song? BTS Fans Are Convinced Jimin Teased The Collaboration

ARMYs are loving the song "Jamais Vu" on BTS' new album, Map of the Soul: Persona. Not only is it the most perfect ballad, but it's a subunit song featuring J-Hope, Jin, and Jungkook. So, of course, fans can't help but have one big question: Do you think there will be other member subunits throughout the rest of the MOTS era? Like, will BTS' Jimin and RM have a subunit song, for example? Because it looks like it may actually be happening, you guys, and I think that would be pretty freaking amazing, don't you?

I mean, Jimin has long expressed that he wants to work with RM on a song, and they actually did already in a way, since RM helped him with his first non-album solo single, "Promise" back in 2018, which broke a major record on SoundCloud that was previously held by Drake.

Now ARMYs think a subunit song with the duo is imminent. Why? Because there's a pretty cute interview the boys did with 104.1 KRBE leading up to the Billboard Music Awards that's making the rounds online that seems to hint at one pretty heavily. In it, Jimin enthusiastically reveals that he wants to collab with RM, and RM playfully (but maybe not playfully?) tells him to shut up.

See, fans think Jimin was just so excited to be working with RM that he couldn't keep the collab under wraps, and RM was simply attempting to shut down the potentially huge spoiler.

It's cute, right? It's clearly a Minjoon nation and we're all just over here living in it. And did you catch those Khalid and Shawn Mendes shoutouts at the end?

Anyhoo, you can see why Twitter is in full meltdown mode over the possible RM/Jimin subunit reveal.

"Jimin just revealed the next subunit and he is so excited to be working with RM that he couldn't hold that secret. KING OF SPOILER."

"Jimin said he wants to collab with RM, we are getting a MinJoon subunit I'm convinced."

"Jimin made spoiler everyone next subunit RM X JIMIN trust me."

"Jimin kept saying "RM" like GIVE ME THAT MINJOON SUBUNIT ALREADY."

"Next subunit is going to be RM and Jimin I KNOW ITS GOING TO HAPPEN SOON."

"Jimin is so cute in that interview everytime they ask 'Who do you wanna collab with next?' he goes 'RM!!!' I love this boy."

Let's take a look at Jimin jumping up and down in excitement again while yelling "RM! RM!"

He is just such a mood here, I love it. And the way he just starts cracking up after RM tells him to "shut up?"

So damn cute. I really, really hope this thing is actually happening.I mean, ARMYs are totally here for this collab, and Jimin obviously wants the subunit to come into being, so can we please just give this precious boy what he wants already?