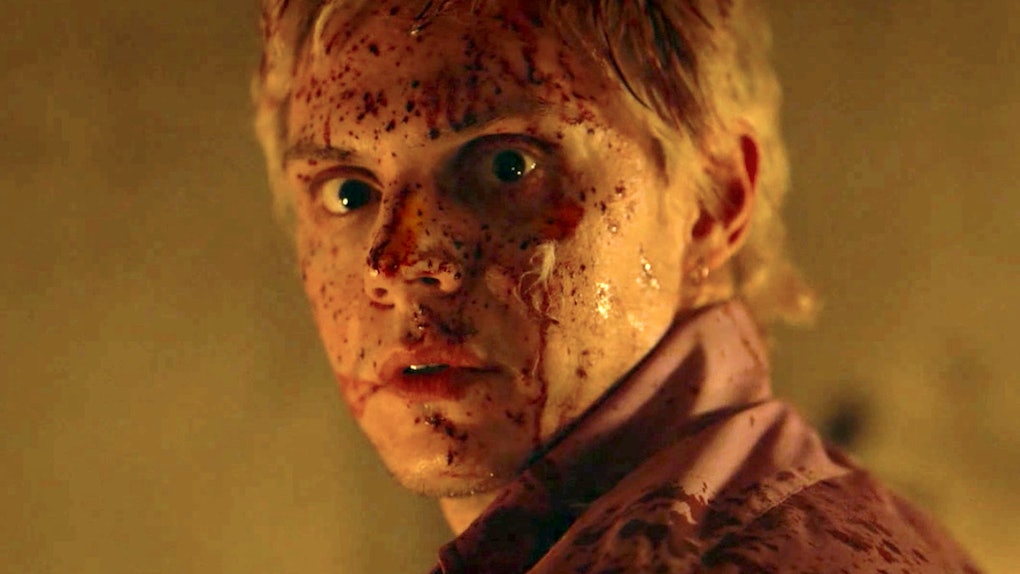 This season of American Horror Story has been amping up the arrival of one unseen character its entire run, and as fans are quick to point out, the real-life version of this person is someone who looks an awful lot like Evan Peters. Although the series favorite announced he would be sitting out from the current season months before its premiere, a growing theory among viewers is that Evan Peters play Billy Idol on AHS: 1984. Here's why fans are getting their hopes up for Peters to clinch his perfect-attendance record with a last-minute cameo.

The ninth season of American Horror Story has been a super-campy and super-bloody homage to the 1980s, but something has been noticeably missing — well, two things, actually. Back in April, before fans even knew what the Season 9 theme would be, Peters announced he would not be in this season, and then Sarah Paulson followed suit shortly after. This came as a huge shock to fans, since Peters and Paulson were the only two actors to have appeared in every single season of AHS prior to 1984. Now that the season is on its final episode, fans are on high-alert with hopes that the announcements were fake-outs.

While Paulson has made it very clear that she's definitely not showing up in the season finale — even recently tweeting "Not true" at a fan theory stating she'd reprise her role of Lana Winters in the last episode — Peters has been radio silent ever since his initial announcement back in April. Since it has been so long, fans are hoping that Peters may have changed his mind and ended up taking a small part in the final episode... and there's certainly an ideal role for him to play.

Spoiler alert: This post contains spoilers from AHS: 1984 Episode 8, "Rest in Pieces." AHS: 1984 has been setting up the arrival of Billy Idol all season long — the rocker's music has scored a couple of scenes from the show, and the fictionalized verison of serial killer Richard Ramirez is a superfan who mentions Idol whenever he gets the chance. In the episodes leading up to the finale, Camp Redwood's owner Margaret Booth set up a music festival at which Idol is set to headline. Idol's opener, Kajagoogoo, already showed up (and died) at the camp, and the penultimate episode showed Ramirez excitedly talking to one of Idol's roadies. But the superstar himself has yet to appear.

With all this buildup for Idol in the season finale, a lot of speculation has gone into who could portray the iconic rock star, and many fans think it's going to be Peters. The actor really does look a lot like a young Idol, and the casting would definitely give the rocker the star power he deserves. Plus, obviously, the fandom would go wild if Peters made a surprise cameo and kept his streak of appearing in every AHS season alive.

Nothing is confirmed, though, and this theory is largely just driven by the fact that Peters and Idol look alike. But still, it does feel like a perfect casting opportunity. Thankfully, fans don't have to wait long to find out if Peters will appear or not. The AHS: 1984 finale will air Wednesday, Nov. 13, at 10 p.m. ET on FX.