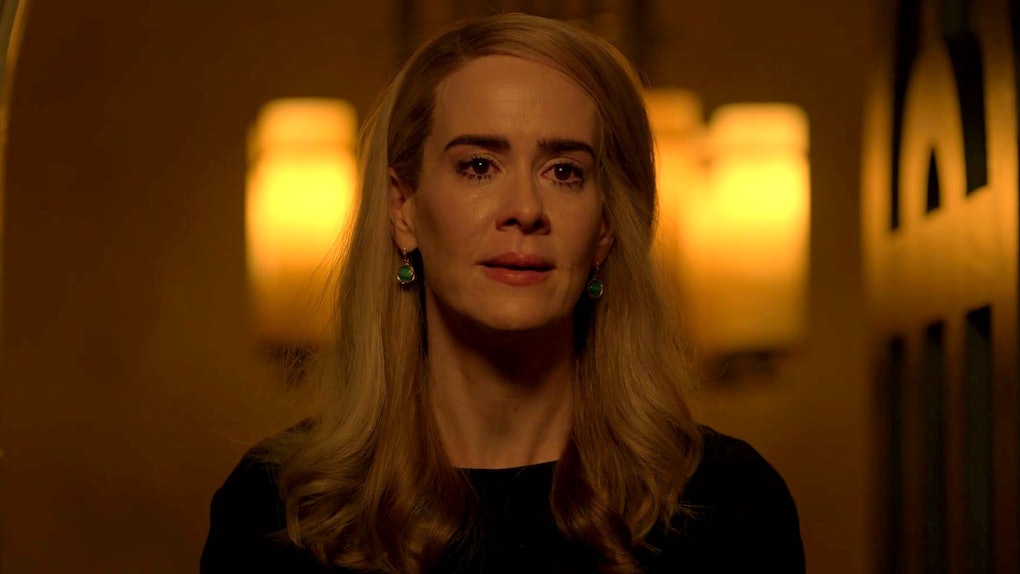 As it turns out, the upcoming season of American Horror Story will be one of the franchise's biggest departures ever. No, we still do not really know much about the theme or who will be starring in the season, but now we do know that both of American Horror Story's staple actors will be sitting this season out for the first time ever. Following the shocking reveal that Evan Peters will not be starring in the new season,Variety has confirmed that Sarah Paulson won't be starring in AHS: 1984 either. That means that this will be the first season ever that does not feature Evan Peters and Sarah Paulson.

Throughout its long run, American Horror Story has established its trademark to be switching up its cast every season, but Evan Peters and Sarah Paulson seemed to be the only two actors immune to being sidelined. While many of the American Horror Story stars have appeared in multiple seasons, Peters and Paulson hold the distinction of being the only actors to star in every single season of the show.

But that is going to change with the upcoming ninth season. Earlier this year, Evan Peters shocked fans by revealing he will not appear in the upcoming season, and now, Variety has reported that Sarah Paulson is also sitting out of AHS: 1984. The report does specify that Paulson is only confirmed to not be playing a significant role in the new season, so there is still the possibility that she appears in a cameo, but even that would be a massive shift in the franchise's tradition up to this point.

In a recent interview, Sarah Paulson stated that she knew less about the upcoming season of American Horror Story than she had about any previous season, which some fans took as a possible hint that she may not be as involved in it.

Instead of filming the new season of American Horror Story, Sarah Paulson has a number of other projects she is currently working on. She is working with AHS creator Ryan Murphy on his upcoming Netflix series Ratched, in which she will star as the iconic One Flew Over the Cuckoo's Nest villain Nurse Ratched in a prequel story. She will also star in the big-screen adaptation of The Goldfinch later this year, and will co-star with Cate Blanchett in the '70s-set political drama Mrs. America for FX.

Fans are still largely in the dark about much of American Horror Story: 1984. Ryan Murphy revealed Season 9's title a few months back with a short teaser showing a frightened woman running from a knife-wielding killer through the woods. The title and the vibe of the teaser immediately led fans to guess that the new season will be an homage to '80s slasher movies, but that is all we've got so far. The cast is also largely a mystery right now. The only two confirmed cast members are Emma Roberts and Gus Kenworthy, who will play a couple in the new season.

Expect to get some more information about the mysterious new season of American Horror Story in the coming months, and look for it to premiere on FX on Sept. 18.