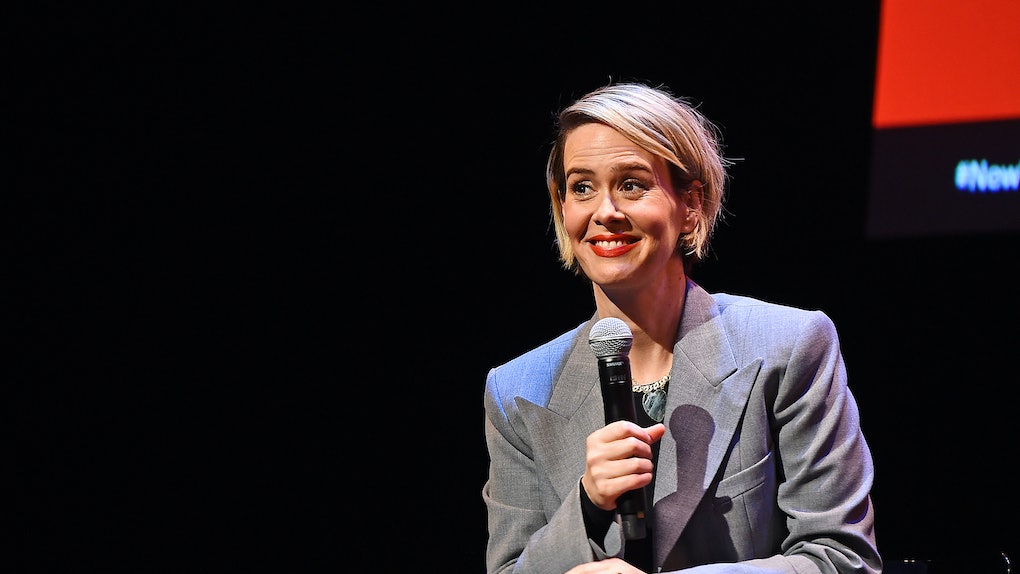 American Horror Story fans can expect one less familiar face as the ninth season nears its end in the next few episodes. According to new reports, Sarah Paulson won’t appear at all in AHS: 1984 after all, per The Hollywood Reporter, seeming to contradict earlier comments that she'd made teasing a possible cameo. It's sad news for fans who were hoping that the American Horror Story mainstay would make an appearance for the show's milestone 100th episode, which will air in the coming week.

While at the 2019 New Yorker Festival on Saturday, Oct. 12, Paulson confirmed during a panel that contrary to fan theories, she won't be making an appearance in the current season, according to The Hollywood Reporter. It's a major blow for viewers considering that the actress has had a major role in every season since American Horror Story: Murder House and speculation was running rampant after she suggested that she may "pop up" at some point during the current season.

If you remember, buzz that the actress might surprise viewers with an appearance during the series' landmark 100th episode first started back in September when she hinted at the possibility while speaking to ET at the Toronto Film Festival.

During her appearance, the actress admitted that it was "bittersweet" not being part of the show, although she said she didn't miss working the unpredictable hours for the series.

"It's a little bittersweet because I have a lot of friends who are still on the show," Paulson told the outlet at the time. "So I'm getting updates about how it's all going and what they're doing, and I'm like, 'Wait what? You worked until two? Oh, I remember working until two on that show.' And then I'm also very glad that I can wake up at a decent hour because I'm not cross-eyed from having worked insane nights."

Despite this, Paulson admitted that "it'll be hard" not being a part of 1984. "I'll be watching and cheering everybody on," she said, teasing, "I'm really excited for this season. I think it's a really cool idea for the show this year. And you never know, I may pop up. You never know. No promises though."

Unfortunately, it looks like she won't be making an appearance before 1984 wraps up after all, but Paulson did shed some light on her role in her upcoming Netflix show Ratched and FX's Impeachment: American Crime Story, and how the kinds of roles she gravitated towards changed after 2016's The People v. O.J. Simpson: American Crime Story.

"There’s pre-Marcia and there’s post-Marcia, and it was very hard for me, once I played a person that was that complicated and three-dimensional and fully realized, to then do something that was a little more on the surface," the actress said of her Emmy award-winning role during the festival. "It made it harder to be excited about it. In my position, since I’m not directing and writing my own stuff, I’m a little bit at the mercy of someone’s interest in me and so I had to wait a beat before anything came to me."

As of now, there's no telling what Paulson's future is with the AHS series, but I'll personally be keeping my fingers crossed that she returns for the tenth season.

More like this
These Tweets About Beyoncé On Netflix's 'Selena: The Series' Are Too Much
By Dylan Kickham
Jamie Lynn Spears' Promotion For 'Sweet Magnolias' Season 2 Means More Noreen
By Dylan Kickham
Annie Murphy's Quote About Alexis & Ted's Future After 'Schitt's Creek' Is So Sweet
By Abby Monteil
Stay up to date