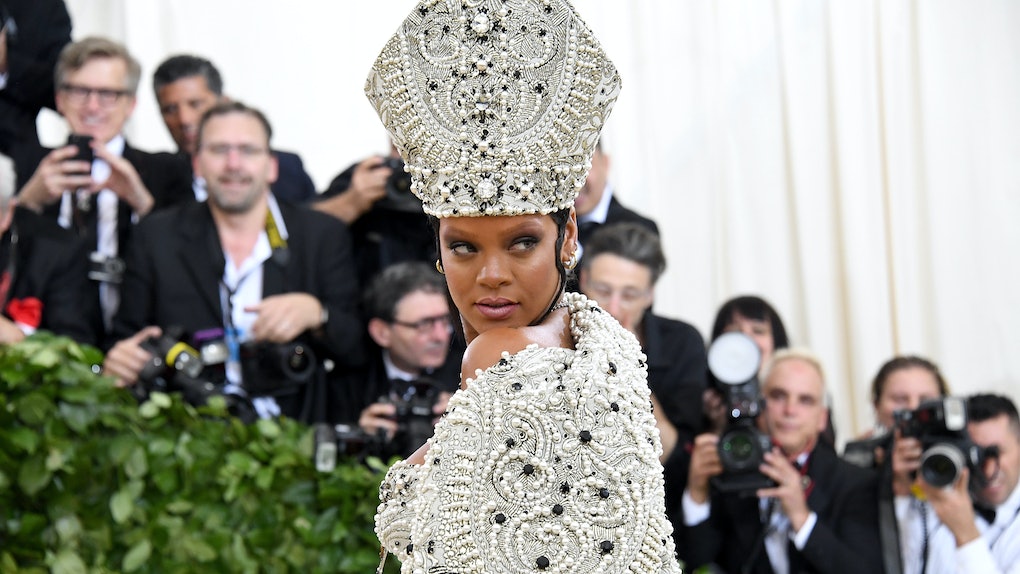 Why Wasn't Rihanna At The 2019 Met Gala? She Just Trolled Fans In The Best Way

When I say the words "Met Gala," what do you think of? If it isn't Rihanna, I can't help you. Riri is the queen of fashion, a style icon, a Met Gala maven. She's stunned on those red carpet stairs like she invented them. Fashion's biggest night, for all intents and purposes, is kind of Rihanna's thing. So... why wasn't Rihanna at the 2019 Met Gala? After she co-hosted the evening in 2018 and showed up in a bedazzled Pope-inspired look, fans were bracing themselves for what she was going to pull out this year. With a theme like "camp," people craned their necks in between Katy Perry's chandelier gown and Celine Dion's headpiece waiting to catch the first look at Badgalriri. And yet...

Celebrity after celebrity and designer after designer arrived, walked, and disappeared into the exclusive event, and as E!'s red carpet coverage waved goodbye to viewers at home at 9 p.m. EST — still, no Rihanna. As you can imagine, Twitter was not having that sh*t. Her fans jumped online to cry out for their goddess and speculate on what could have possibly kept her away.

If you follow Rihanna at all, you know she is also the creator of the makeup empire Fenty Beauty. Since its launch, Fenty has skyrocketed in the makeup industry and quickly became a fast favorite among beauty gurus and influencers. Fans suspected her obligations to her company might have had something to do with her absence. Between all of the crying memes and sad emojis, one person wondered if Rihanna was "at home playing with that f*ckin makeup."

In a hilarious plot twist, Rihanna caught wind about how upset people were that she was not at the Met Gala and decided to respond to this tweet, in particular. She went ahead and took a screenshot of the tweet and posted it on her Instagram stories next to a picture of what appears to be a bunch of her Gloss Bomb lippies, thus confirming she was, in fact, "playing with that makeup."

Based on the deep dive other publications took to get to the bottom of Rihanna's whereabouts, it looks like she was actually in the U.K. working on her makeup collection.

However, that doesn't mean she wasn't tuned in to all the amazing festivities. As I previously mentioned, the 2019 Met Gala theme was "camp," but not in the sense you're probably thinking of. This wasn't about friendship bracelets, campfires, and roasting marshmallows. This was about being as extra as possible. The theme was inspired by a Metropolitan Museum of Art exhibition featuring Susan Sontag's essay called Notes On 'Camp.' In the essay, she explains "camp" is the "love of the unnatural: of artifice and exaggeration." In other words, it was a chance for celebrities to go all in.

From her perch on her makeup throne, Rihanna jumped on Instagram to dub Anna Wintour, the long-standing co-chair of the Met Gala, "best dressed."

You were missed, Rihanna. Prepare yourself for #RihannaMetGala2020 hashtags now.