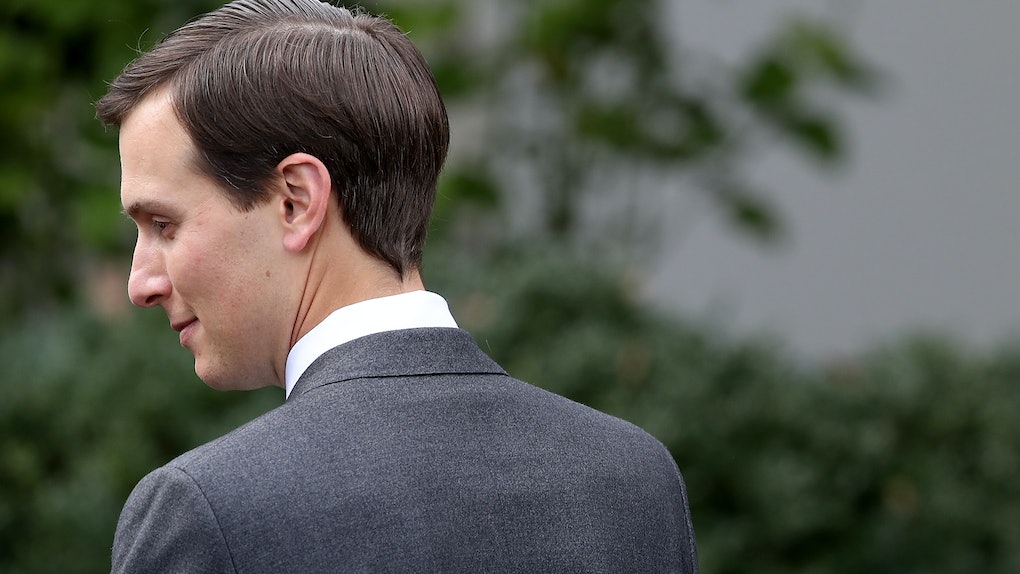 While news about his father-in-law's campaign has dominated the Monday news cycle, Jared Kushner has garnered suspicion around himself as well. On Sunday, Oct. 29, Politico reported that Kusher took an unannounced trip to Saudi Arabia during the previous week, marking the third trip this year for the senior advisor to President Donald Trump. Why Kushner spent the weekend in the Middle East, and whom he met with while there, remains unclear. Elite Daily reached out to the White House for comment but had not heard back at time of publication.

Kushner's trip appeared to be separate from a trip Treasury Secretary Steven Mnuchin was taking to the Middle East during the same time span with the purpose of combatting terrorism financing.

A White House official confirmed the trip to Politico, saying,

The Senior Advisor to the President, the Deputy National Security Advisor for Strategy, and the Special Representative for International Negotiations recently returned from Saudi Arabia ... The Senior Advisor has also been in frequent contact with officials from Israel, the Palestinian Authority, Egypt, United Arab Emirates, Jordan and Saudi Arabia.

Since the beginning of the Trump administration, Kushner has had an outsized role in foreign policy relative to how little experience he's had in the field. In addition to being assigned to tackle stability in the Middle East, Kushner has his hands full with relations with China, Mexico, and Canada.

Kushner's role has downsized — or at least, remained largely out of front-page headlines — since news that his sister was reportedly offering visas to Chinese financiers in May, according to The New York Times.

Per CBS News, Trump tasked his son-in-law with peace-building between Israel and Palestine before he took office, reportedly telling Kushner that if he "can't produce peace in the Middle East, nobody can."

Kushner, in his nearly 10 months in the Trump administration, has made himself a warm contigent there. Kushner was apparently well received by Saudi Arabian King Mohammed Bin Salman, also in his 30s. Kushner traveled to Saudi Arabia in May and again in August. The May visit was part of a larger tour of the region, but perhaps most notable was a $110 billion arms deal that Trump signed with Saudi Arabia, largely brokered by Kushner.

While these regional talks will play an important role, the President reaffirms that peace between Israelis and Palestinians can only be negotiated directly between the two parties and that the United States will continue working closely with the parties to make progress toward that goal. No deal will be imposed on Israelis and Palestinians. We are committed to facilitating a deal that improves conditions for both parties.

Sunday's revelation that Kushner made the unannounced trip is drawing scrutiny, as the report comes along with Monday morning news that members of Trump's campaign have been indicted. On Monday, the Justice Department released information about charges against Trump's campaign chair Paul Manafort and his business associate Rick Gates, including on charges of conspiracy against the U.S. and money laundering. Following this report, documents were released showing that former Trump campaign aide George Papadopoulos had pleaded guilty to lying to the FBI during its investigation about Russian meddling in the 2016 election.

Kushner has come under increasing scrutiny following revelations of his role in a June 2016 meeting and an email thread pertaining to Russian nationals having "dirt" on candidate Hillary Clinton.

It remains unclear why the trip was not disclosed previously.