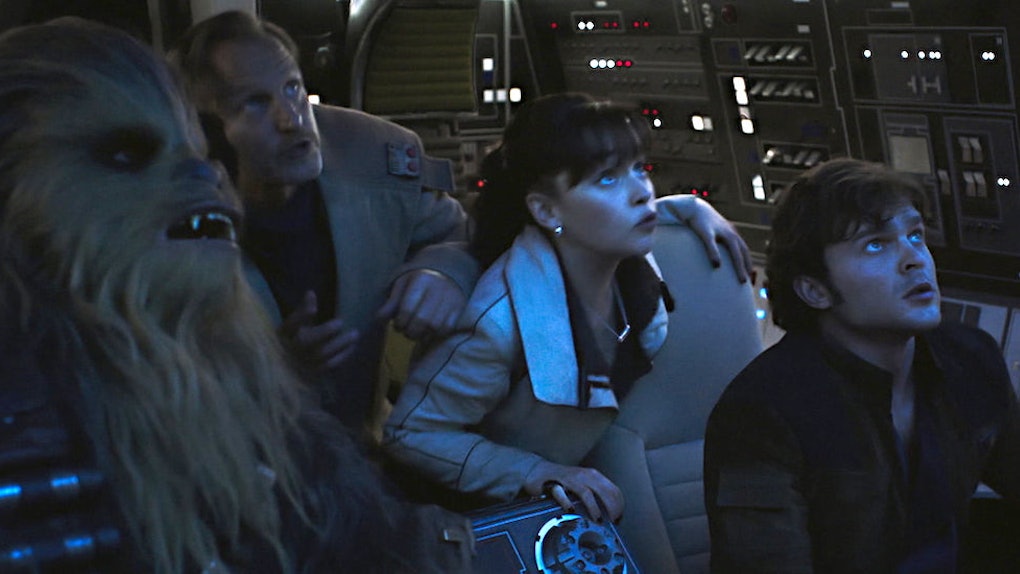 Why Was Darth Maul In 'Solo: A Star Wars Story'? The Writers Explain Why It Makes Sense

Throughout Solo: A Star Wars Story, it seems like Paul Bettany's luxury-loving killer Dryden Vos is at the top of the Crimson Dawn crime syndicate, but in the end, Qi'ra contacts Maul, revealing that the Sith Lord from The Phantom Menace is still alive and is the real leader of Crimson Dawn. "But wait," some fans may be asking, "didn't we all see Obi-Wan Kenobi kill Darth Maul at the end of The Phantom Menace?" The first film in the Star Wars canon does indeed end with Kenobi slicing Maul in half, watching as his bisected body falls into a pit. It definitely did not seem like there was any way for him to survive that... but then in 2011, the canon animated series Star Wars: The Clone Wars revealed that Maul actually did survive being cut in half, and his brother found him and fit him with a pair of cybernetic legs.

It was actually Maul's story on the recent seasons of Star Wars: The Clone Wars and fellow animated series Star Wars: Rebels that actually inspired the Solo: A Star Wars Story writers to reintroduce the red-faced Sith Lord into the feature films. Solo screenwriters Lawrence and Jonathan Kasdan told Variety that they thought Maul's time working within the world of organized crime portrayed in those animated series made him the perfect choice for the secret big boss behind Crimson Dawn:

Maul had gone into this criminal underworld and this particular period in his life was left vague and gray in the canon. That gave us an opening to say, ‘OK, can we use that character, and if so, does he fit really nicely into a world of scary people?'

One of the first things that Maul did after regaining his legs and swearing his revenge on Obi-Wan Kenobi was to amass a huge criminal alliance among the most powerful crime families in the galaxy. Although Crimson Dawn has never been brought up until Solo, it makes sense that it would be one of the many crime syndicates that Maul was secretly overseeing.

With more movies set in the Solo years being planned moving forward (including a recently green-lit Boba Fett movie), Darth Maul's appearance at the end of Solo definitely looks like it is setting up his return in future movies. The ending scene reveals that Han Solo's former girlfriend Qi'ra is still working with Maul, choosing to abandon Han to obey Maul's orders to fly come to him, so that will definitely need to be addressed.

However, there are only a few unaccounted-for years that these Solo-era movies can take advantage of. Solo takes place about ten years before the events of Star Wars: A New Hope, and Darth Maul canonically dies for good about two years before that in another lightsaber battle with Obi-Wan Kenobi, so don't expect this story to be drawn out over a bunch of new movies.

Last month, Alden Ehrenreich let it slip that he's signed on to reprise his role as Han Solo in two more movies after Solo. Right now, it's looking like that might mean appearances in Boba Fett, the rumored Lando movie, up to two Solo sequels, or some combination of those, and fans can bet that Darth Maul will be back again in one or more of those movies as well.

More like this
Will Sharon Carter Be The Villain In 'Captain America 4'? This Theory Makes Sense
By Ani Bundel
These Throwback Jennifer Lopez Movies Are Such A Blast From The Past
By Ani Bundel
7 Movies About Graduation To Prepare Yourself For The Cry-Fest
By Claire Spellberg
Stay up to date