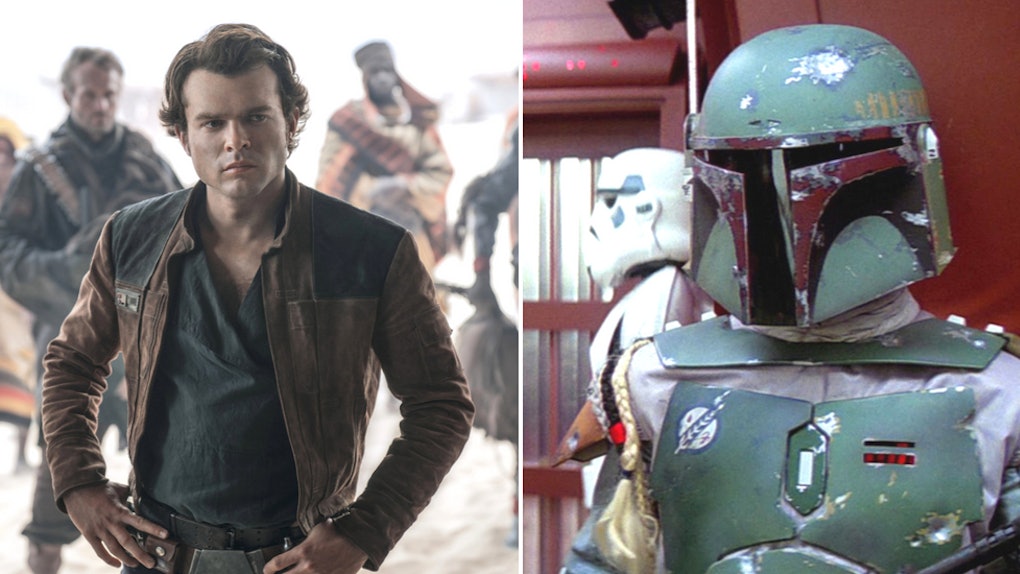 Is Boba Fett In 'Solo: A Star Wars Story'? Here's How It Sets Up His Standalone Movie

Han Solo's standalone movie may have just flown into theaters, but the Star Wars fandom cannot stop talking about another character. Lucasfilm recently revealed that its next Star Wars Story movie will focus on the seldom-seen but fan-adored bounty hunter Boba Fett. Even before this news came out, fans were already speculating that Solo: A Star Wars Story might include a cameo or mention of Boba Fett due to the character's fate being intwined with Han Solo, and the movie news seemed to hint at an appearance even more. So, is Boba Fett in Solo: A Star Wars Story? Let's talk about all the ways that Solo actually helped to set up the upcoming Boba Fett movie, even if you may have missed some of them.

Spoiler alert: The rest of this post will discuss plot details from Solo: A Star Wars Story. Rumors about a possible Boba Fett cameo or appearance in Solo really began a while back, when a promotional photo showed Paul Bettany's character of Dryden Vos standing in front of a suit of Mandalorian armor. Of course, the most iconic Mandalorian to all Star Wars fans is definitely Boba Fett, so fans were hopeful that the new movie would either feature Boba or drop some previously unknown information about the mysterious bounty hunter.

But as it turned out, that Mandalorian suit did not come up in conversation once in Solo. Dryden Vos just happens to be a collector of rare items, and wanted to include this rare suit of armor in his collection.

So, no — Boba Fett unfortunately does not make an appearance in the movie at all, nor does anyone directly reference him throughout the run of Solo. But although the bounty hunter does not make a direct appearance, there were a few very notable lines and moments that seem to be clearly setting up Boba Fett's upcoming standalone movie:

Although Boba Fett did not appear in Solo, it seems pretty likely that Alden Ehrenreich may reprise his role as Han Solo in Boba Fett's movie, especially since he let it slip that he is signed on for three movies total within the Star Wars franchise.