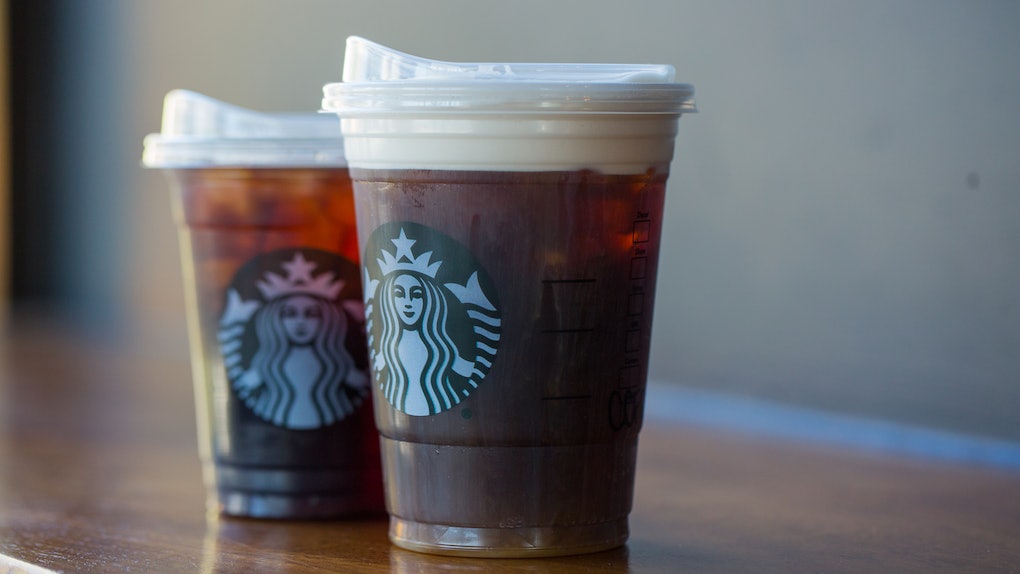 Why Is Starbucks Eliminating Plastic Straws From Stores? It's An Eco-Friendly Decision

On Monday, July 9, Starbucks revealed in an announcement that it will eliminate plastic straws from its stores worldwide by the year 2020. Sounds great, but you might wonder what the coffee chain's motivation is behind a move that will get rid of the convenient way you currently sip your favorite Iced Caramel Macchiato or Triple Mocha Frappuccino. So, why is Starbucks eliminating plastic straws from stores?

According to the announcement, the health of the environment is at the forefront of this decision, and it comes at a time when Starbucks is focused on "reducing waste and safeguarding the environment." Starbucks has more than 28,000 stores around the world, and the removal of plastic straws from all of them will get rid of more than 1 billion plastic straws per year, per Starbucks. To achieve that end, Starbucks will employ a new strawless lid to provide the perfect way for you to enjoy all of the chain's tasty cold drinks, like the new Salted Cream Cold Foam Cold Brew.

The new lid with a thumbprint-sized opening in the top is also made of plastic, but it contains "polypropylene content," which can be easily recycled. Chris Milne, director of packaging sourcing for Starbucks, elaborated in the release about the reason behind eliminating plastic straws from stores. Milne pointed out, "By nature, the straw isn’t recyclable and the lid is, so we feel this decision is more sustainable and more socially responsible."

The strawless lid is a great solution for most cold drinks, but there are times when a straw is your only option, like when you order the Ultra Caramel Frappuccino. Don't worry, because Starbucks is not about get rid of the entire Frappuccino menu along with its plastic straws. The company will serve all of the crave-worthy Frappuccino beverages with a paper or compostable plastic straw. The compostable plastic straw will be made from "fermented plant starch or other sustainable material," so it won't create the same plastic waste as the current straws, per the release.

Starbucks' decision to move away from plastic straws is an important one, because it helps reduce the amount of ocean plastic. In the release, Nicholas Mallos, director of Ocean Conservancy’s Trash Free Seas program, explained how much plastic waste affects the oceans. Mallos shared, "With eight million metric tons of plastic entering the ocean every year, we cannot afford to let industry sit on the sidelines."

Colleen Chapman, vice president of Starbucks global social impact overseeing sustainability, spoke to the importance of reducing plastic waste in the release. Chapman said, "Not using a straw is the best thing we can do for the environment."

The impact of Starbucks' decision to eliminate plastic straws could be a very big one, because cold drinks accounted for more than 50 percent of sales for the coffee chain in 2017. The replacement of the current plastic straws with the recyclable strawless lids on a majority of the cold drinks sounds like it is a step in the right direction in terms of reducing plastic waste. Plus, you'll still be able to enjoy all of your favorite Starbucks sips while also helping the environment.

You might wonder how the new strawless lid will affect your next Starbucks experience. The final product was decided on after 10 weeks of design experimentation, so you know you're getting a good quality lid. It's described in the release as a "cleaner, less-rigid version of a hot cup lid." The lid's opening is in the shape of teardrop, and it's the perfect way for you to enjoy your favorite cold foam drinks at Starbucks. In fact, you can already use the strawless lid in more than 8,000 Starbucks stores in the United States and Canada when you order a Starbucks Draft Nitro or a Starbucks Cold Foam drink.

As for when the changes will take full effect, customers in Seattle and Vancouver will see the strawless lids in place of plastic straws in the fall, and the rest of the 28,000-plus Starbucks locations will follow suit with the complete elimination of plastic straws by 2020. Cheers to eco-friendly caffeine boosts!