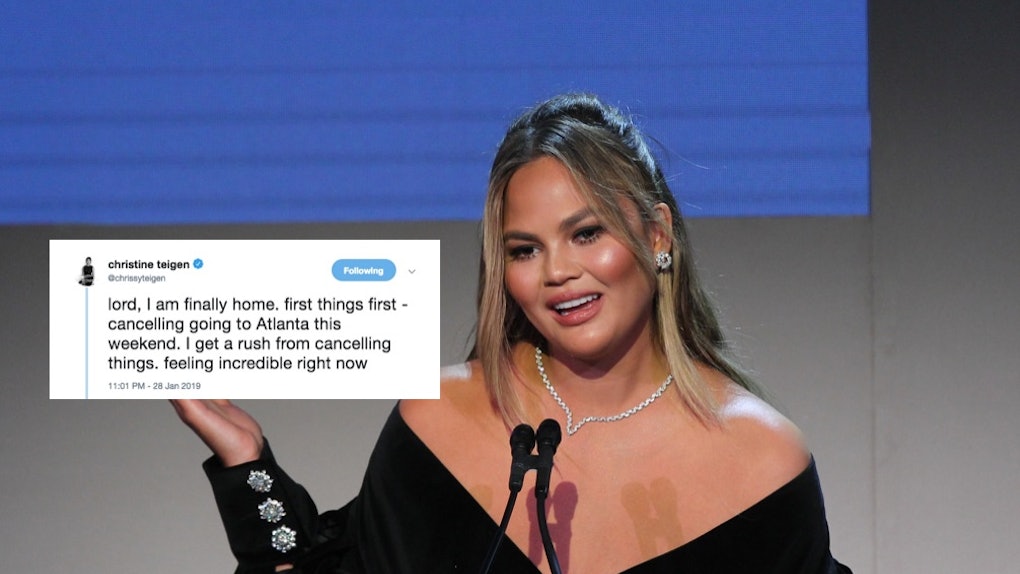 Why Does Canceling Plans Feel So Good? Chrissy Teigen's Tweet Is Relatable For A Reason

If, for some reason unbeknownst to me, you don’t love Chrissy Teigen (seriously, why?), you have to at least respect how the woman lives her life: unapologetically truthful. The Lip Sync Battle co-host is the type of person to speak (or tweet) her mind whenever she sees fit, sans filter, so while some fans took Chrissy Teigen’s tweet about the “rush” of canceling her plans to fly to Atlanta this weekend as a dig toward A-town, that type of mood spoke to my soul. Once in a while, it can feel so good to cancel plans, and if I'm being honest, I love making plans almost as much as I love breaking them. It’s nothing personal, nor is it ever intentional. Sometimes life just gets in the way. (And all the other times, it’s simply out of pure laziness.)

Generally speaking, when it comes to making plans with people, some say the surefire way to avoid bailing at the last minute is to plan the get-together far in advance. Case in point: In a recent interview with Elite Daily on how to stay productive in the winter, Evernote’s editorial director and the host of the podcasts Taking Note and Focus Culture, Forrest Bryant, told me that, “if you schedule something in advance like a workout class or coffee with a friend, you are less likely to cancel.” I have to be honest though, guys: Whenever I make plans far in advance — even if I haven’t seen the person in forever, even if I was genuinely excited about going out to brunch or trying SoulCycle for the first time — my track record shows I’m actually less likely to follow through. Instead of feeling refreshed because I was productive, I feel exhilarated because I don’t have to leave my house after all. If any of this is resonating at all, part of you is probably relieved, while the other part is probably wondering, what gives?

For the record, I’m not a couch potato, nor would I consider myself antisocial. I’m a true ambivert, meaning I love being surrounded by friends and family, but in small doses. I really value my alone time, and when I feel particularly frazzled during the week from work, I prefer to recharge solo. So for me, personally, canceling plans can feel really good because it’s my way of carving time out of my already-busy schedule to decompress, get my sh*t together, and overall, just do me.

According to Emily Pierce, project manager for BodyLogicMD, a network of physicians specializing in hormone therapy, because time is of the essence, it’s something we as humans value most, and because how you spend your time is one of the few things you have total control over, it factors into when and why you cancel (or follow through with) plans. "Time is one of the few things many of us feel that we can control in our lives, including how we spend it and who we give it to,” Pierce tells Elite Daily. “Canceling plans is one of the ways we say, ‘I decide how I'm going to spend my free time—and even if I've made these plans, I'm going to do what I want.’”

Listen: If the original plan on Monday was to get dressed up on Friday night for dinner and drinks with a group of friends, but when Friday morning came along, what you really wanted to do was pour yourself a glass of merlot in your pajamas and marathon Riverdale, there’s no shame in that. It doesn’t mean you didn’t have every intention of breaking in your new heeled booties and spilling the tea over a round of cosmos; sometimes #adulting gets exhausting, and vegging out takes priority.

There’s also a certain level of built-up anxiety that comes along with making plans in advance, Pierce adds. The more time you have in between when you make the commitment and the actual day of the commitment, the longer you have to think about it — what you're doing, who you'll be doing it with, for how long, etc. However, when plans are spontaneous, Pierce tells Elite Daily, “you haven't been dwelling on them, thus making them more enjoyable.”

Before you interpret this article as my giving you permission to bail on every single plan you make from here on out, allow me to clarify: It’s totally fine to cancel plans every once in a while because, yeah, sometimes life happens, or you just don’t feel like going out after all. It’s not OK, though, to be a serial canceller, and by that I mean, making plans knowing damn well there’s a really good chance you’re not actually going to go through with them. If that’s the case, then don’t be surprised when happy hour invites come to a halt.

Though the rush of canceling plans is certainly a #mood, keep in mind that it's probably best not to come off moody when you bail. In terms of your presentation, Pierce says honesty is the best policy. "If you're able to, nicely convey to the people you're canceling on that you're simply not up to going out," she tells Elite Daily. "Still, this is best done with ample notice rather than the day of."

It's probably also in your best interest to text it, not tweet it (sorry, Chrissy).