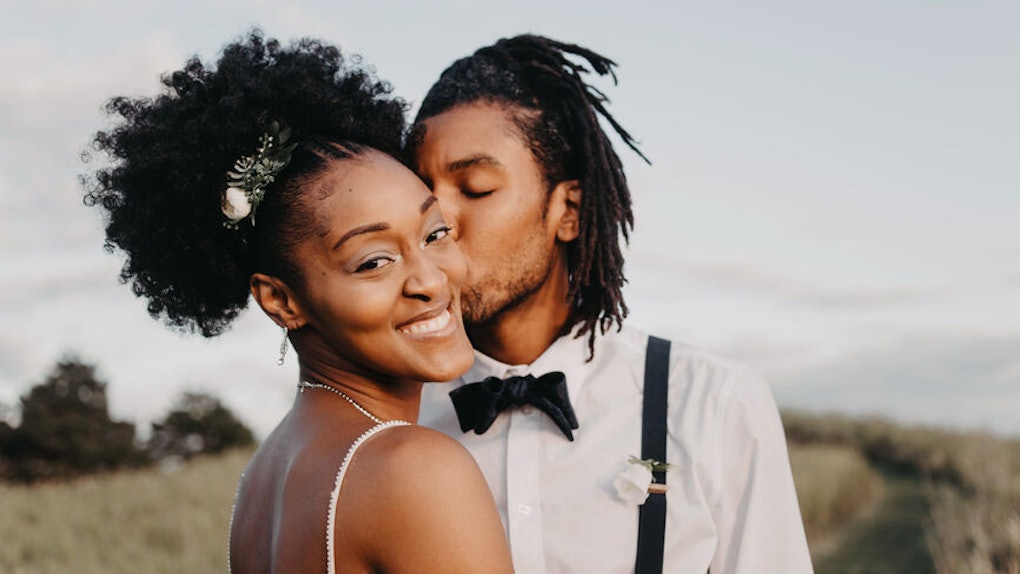 Why Can't Couples See Each Other Before Their Wedding? The Tradition Is Bittersweet

Something old, new, borrowed and blue, a white wedding dress, and a bouquet toss. There are plenty of traditional wedding customs Americans hold close to their hearts. But where do these customs stem from? If you've ever wondered why couples can't see each other before their wedding, you might be surprised to learn that the tradition's origins are rooted in superstition and fear. Not necessarily the sweet history you were imagining, huh?

Decades ago, people believed weddings were supposed to mark a clean break between old and new, according to Bride's Book of Etiquette. If a groom saw the bride before the wedding, she would no longer be "new" and "pure," which is pretty problematic in and of itself. Some superstitions even claimed that if the bride saw herself before the wedding in a mirror, she might leave a bit of herself behind in it.

The actual origin story for the tradition of brides and grooms not seeing each other before the wedding is even less than romantic. Centuries ago, marriages were typically arranged in the U.S. and Europe. Marriages were less about two people loving each other dearly and committing to each other as a result, and more like a business merger between two families. (While Western culture has moved away from this belief, arranged marriages are still common practice in countries such as India, Korea, Pakistan, and Bangladesh.)

According to Brides magazine and Bridal Guide, fathers of brides made it commonplace for brides and grooms to not see each other at all before the wedding, or even meet IRL, period. They feared the groom would see the bride, find her unattractive, call off the wedding, and ultimately, embarrass the bride's family because of it. Yikes.

While your marriage might not be arranged and the stakes might not be as intense, you might still decide to keep this wedding tradition in your own ceremony. Lesley, 30, got married in February 2019. "We chose not to see each other because of my great, great-grandparents," Lesley tells Elite Daily. "They were in an arranged marriage and didn't see each other before the ceremony."

Instead, her great, great-grandparents had a moment with their priest, which remains a family custom. "There was a fence between them, the priest joined their hands and then prayed, asking God to bless their marriage. We continue the tradition today," Lesley says.

On the other hand, Julie, 26 opted to not see her husband, but not just for tradition's sake. "It also made the day feel more special and exciting, knowing the next time we would see each other it would be as husband and wife," Julie, who got married in March 2018, tells Elite Daily. After their rehearsal dinner, her then-fiancé dropped her off at her home and he stayed with his parents for the night.

The two then re-united before their ceremony to pray together, exchange gifts, and trade love letters. "While we wanted to wait to actually see each other, it was important to have a moment before all the craziness and pray together, as we want our marriage to be centered and based in faith first," Julie explains.

And finally, there are couples like Cody, 27, and her husband, Ryan, 30, who got married in September 2019. The two went for a walk with their dogs and got ready for their wedding together, an experience that Cody calls "a wonderful addition to the day, calming, comforting, and joyful."

"Every time he would pop in during my hair or makeup, it made my heart flutter," Cody says. She also called the decision for her and her fiancé to see each "the best decision we made" and something that they didn't have to think twice about. "On a day that has the possibility to produce so much stress, having him around the morning of truly made it stress-free. He's always been my person when I need to unwind," Cody tells Elite Daily.

The couple still did a "first look," which meant Ryan left before Cody put on her dress and they met up afterward. "Honestly, I wish we would have even skipped that and just had him help me with my dress as well," she says. "We still had a fantastic experience."

Ultimately, your wedding day is your special day. Do what makes you and your partner happy. Maybe you want to heighten the anticipation of seeing your SO all glammed up for the big day. Perhaps, you'd like to give them space or get in some "alone time" of your own by just meeting up a few minutes before the ceremony to calm your nerves.

Or maybe the idea of jamming music while you get ready with your partner, as you would for any other event you're both attending, sounds absolutely delightful to you. Whatever decision you and your SO make, what's truly important is celebrating the love between you. When you chose to see each other won't change that.

More like this
Zac Clark & Tayshia Adams Are Wedding Planning & I’m So Pumped
By Lydia Wang
When Are Ariana Grande & Dalton Gomez Getting Married? Here's The Reported Tea
By Corinne Sullivan
20 Celebrity Couples Who Were Born The Same Year As Each Other
By Corinne Sullivan
Stay up to date