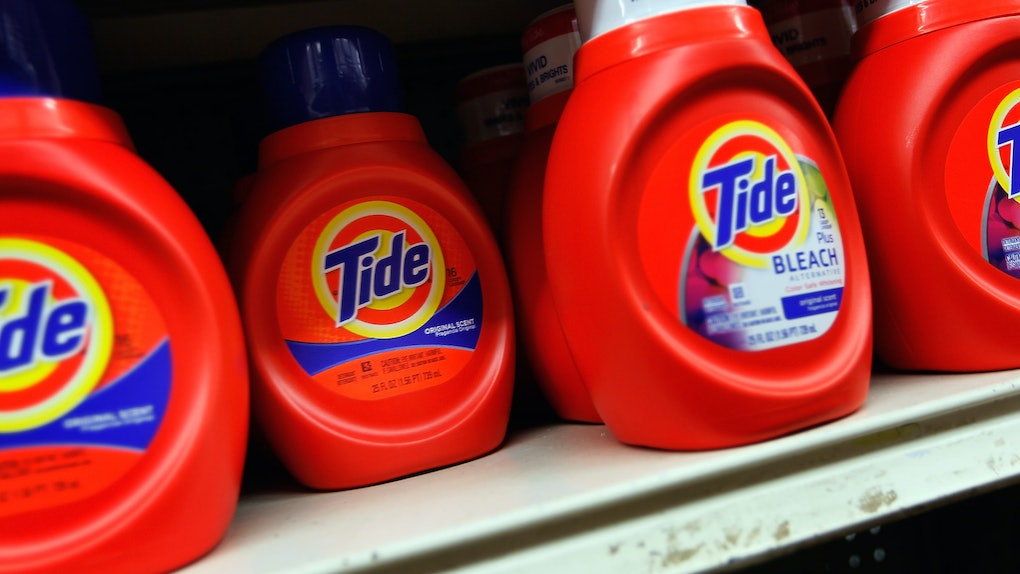 Why Are People Eating Tide Pods? It's A Meme Gone Very Wrong

Just when we thought our society literally could not get any weirder, people proved us wrong and starting eating Tide Pods. Er, I guess it was really just some internet fame-hungry teens putting the pods in their mouths, biting into them, and even sometimes vaping them... But still, yikes. While the concentrated "pod" version of the popular laundry detergent brand is seriously getting some wild AF publicity, you might be wondering how this all got started in the first place. We've investigating as to why people are eating Tide Pods, and the answer is actually so ridiculous.

Officially called the Tide Pod Challenge, everyone started "eating" Tide Pods because of a serious of absurd tweets and memes. According to Distractify, Twitter user @nightfilm kicked off the joke by tweeting his trials of attempting to convince Gushers to create "a fruit snack that looked like a laundry pod," on Dec. 26, 2017. Little did @nightfilm know, however, that thoughts (and actions) of eating Tide Pods would eventually turn into one of the biggest and most controversial memes of 2018, literally plaguing our nation's sense of humor and their judgement. After he tweeted at the candy company, Gushers eventually answered @nightfilm with evidence that others had been thinking about it too, and that's when our nation just totally lost it.

Left and right, memes began surfacing, making jokes about eating — or wanting to eat — Tide Pods. It honestly came from left field, and, hot take: it was never that funny (oops, sorry guys, I'm a party pooper). Between memes about "clean eating" (get it, eating laundry detergent is "eating clean..." took me a while, whatever), and just straight-up jokes about being tempted to eat Tide Pods, it honestly felt never-ending, and made all of us who still had a little bit of common sense in this world seriously want to officially quit the internet.

All of these memes eventually lead to people (mostly fame-hungry teens) taking videos of themselves biting into Tide Pods for what they called the Tide Pod Challenge. You might be wondering why on earth someone would do something like that, and the unfortunate answer is, simply, for that good old YouTube fame. Even though challengers would just end up spitting out the detergent afterwards (while also wasting a perfectly good Tide Pod), those of us with better judgement were shocked and, honestly, disgusted. YouTube and Facebook end up banning any and all of the Tide Pod Challenge videos, since it was considered dangerous... and just really freaking absurd.

Tide ended up having to do a little PR to save the brand. You know, because "Tide Pods" was literally all over the internet, incorrectly in the context of food. Which, to say the least, is not great. They ended up hiring football star, Robert Gronkowski, aka Gronk, of the New England Patriots, to star in a video on their Twitter page (bet they never expected having to do that). In order to convince kids to stop eating Tide Pods, Gronk asked "what the heck is everyone doing," and laid down the law. I mean, the fact that Tide had to make a video to prevent Tide-eaters from doing their thing is kind of sad and totally ridiculous. The world might actually be broken, and none of us know what to do about it.

So if you didn't see a "clean eating" meme, or "wanting to eat a Tide Pod" joke before the videos of people actually eating them surfaced (and quickly got shut down), you're probably lucky. It definitely wasn't panning out to be the joke of the year, and it's by far one of the weirder things our nation has had to deal with recently... and that's saying something.