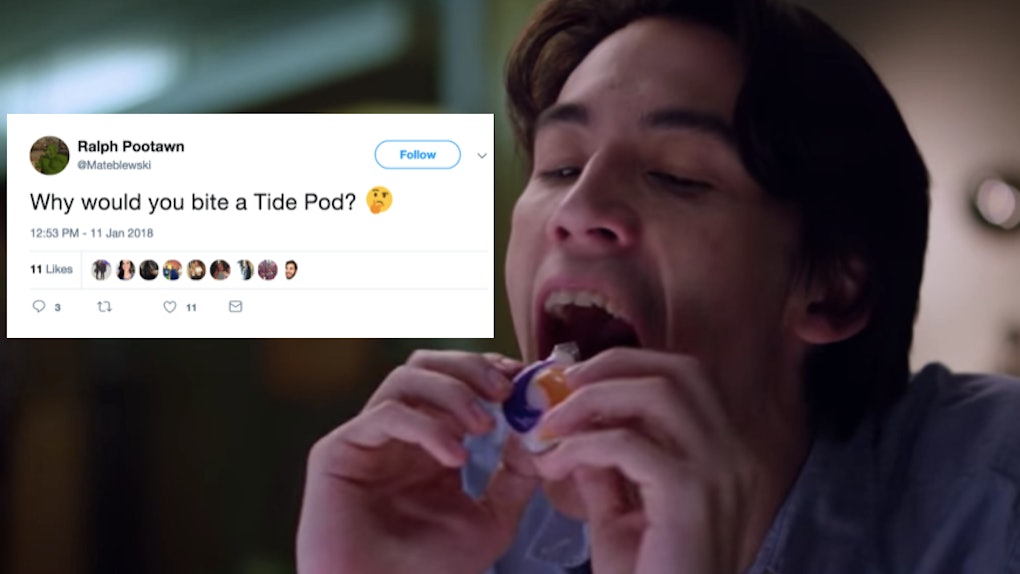 I want to begin this post with one simple message: Do not eat Tide Pods. I really want to make it crystal clear that laundry detergent (no matter how "delicious" it might look) is not meant to be ingested. If you think that I'm doing my best "captain obvious" impression right now, I'll have you know that these detergent capsules have seemingly captured the attention of a certain segment of the population, and people are joking about ingesting them. In fact these memes about "eating" Tide Pods are a bit much (and so weird).

Before today, I never knew that Tide Pods had such a cult following for a use other than getting out red wine stains. I appear to have been highly uninformed, because it seems that many people find the look of Tide Pods — with their bright blue-and-orange swirl design — very appealing. It's more than just aesthetically pleasing, though, because some people can't help but think they look delicious.

This pretty much the sums up the Tide Pod obsession.

Reminder: It is soap.

This would not make me a morning person.

Why bleach, though? Also, never do this.

The love of Tide Pods makes you do crazy things.

Eleven got into the mix with this "Stranger" meme.

If I apologize for that pun, will you promise to never eat Tide Pods?

This meme might make you rethink your relationship goals.

Honestly, I'd prefer help with the folding and putting away of the laundry.

Beyond admitting that they want to chow down on Tide Pods (please don't), people are creating memes that put Tide Pods into their already existent favorite treats.

I'd like to make it clear that you shouldn't bake your Tide Pods either.

What did Oreos ever do to deserve this sacrilege?

Before you pop, please, just stop.

Pringles are food. Tide Pods are not.

Finally, when it comes to Tide Pod memes, there seems to have been some kind of SpongeBob SquarePants connection.

There's SpongeBob as a Tide Pod.

The difference, Patrick, is that one is edible (candy) and one is most definitely not supposed to be eaten (Tide Pods).

While some people are here for the Tide Pod memes, there is also a lingering feeling of "But, why?"

These memes are not the first time there was hype surrounding the obsession with wanting to eat Tide Pods. To trace the craze back to its origin is not a simple task. Back in 2015, The Onion published a satirical piece about the desire to swallow up a Tide Pod, according to USA Today. In 2017, College Humor posted a satirical video called "Don't Eat the Laundry Pods," and it featured a college student giving into the desire to eat an entire container of pods and winding up in an ambulance.

Before the somewhat mocking instances concerning the ingestion of Tide Pods, there was a real danger when the number of calls to poison control centers went up following the release of Tide Pods in February 2012, according to Know Your Meme.

So, just to be clear, there is a real present danger when it comes to wanting to eat Tide Pods. While making memes about it is fine (albeit a little weird), actually eating Tide Pods is a definite no-go. So, please do yourself a favor and keep the convenient detergent packs in the laundry room where they belong. If you get hankering for a sweet treat, hit up the candy aisle — your stomach will thank you.