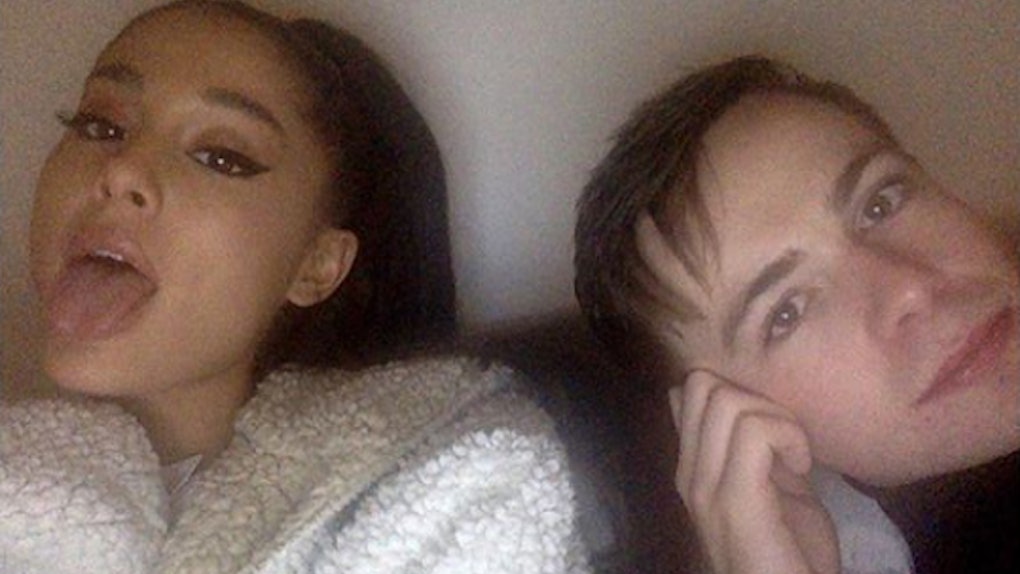 Who's The Voice On Ariana Grande's "In My Head"? Doug Middlebrook Is The BFF Everyone Wants

Ariana Grande fans are still ravenously eating up all of the delicious tracks on her new album, Thank U, Next, which was released on Friday, Feb. 8. While the public was treated to a few goodies like "7 Rings" and the song "Thank U, Next" prior to the record's debut, surprise hits like "Ghostin" and "In My Head" are quickly becoming fan favorites. One question people keep asking is: "Who's the voice on Ariana Grande's 'In My Head'?" The answer is it belongs to her bestie and tour director Doug Middlebrook, and you're going to love their relationship.

Let's start with Middlebrook's words on the track first. Prior to the album's release, Grande revealed on Twitter that the song "In My Head" is about, "being in love w a version of somebody you've created in your head. falling for someone that they are not." (Major sigh.) Of course, folks immediately drew connections back to her ex-fiancé Pete Davidson, though Grande has never confirmed or denied who she's specifically talking about on the track. At the very top of the song, Middlebrook's voice offers words of tough love. To me, it sounds like a voicemail recording he must have left Grande during a tough time. Middlebrook says,

Here's the thing: you're in love with a version of a person that you've created in your head, that you are trying to but cannot fix. Uh, the only thing you can fix is yourself. I love you, this has gone on way too long. Enough is enough. I'm two blocks away. I'm coming over.

Grande answered a few questions about Middlebrook's album cameo on Twitter, explaining she wanted to give Middlebrook a "musical hug" for his support throughout rocky periods.

Grande also told Zach Sang she originally had a quote from Jack Nicholson slotted for the song's intro, but in the end, it was more meaningful to have Middlebrook's words on the track. (Plus, they couldn't get the rights to Nicholson's quote. Whatever.) She explained,

It was funny ‘cause we had a different quote from a movie there. It was Jack Nicholson saying, 'You seem to have things strangely confused in your mind.’ We couldn’t clear it, unfortunately. I like this so much more ‘cause I was like: Doug was such an incredible friend to me during that time and I don’t know if I would’ve gotten myself out of certain unhealthy situations if it hadn’t been for his help. [He] also says 'in your head,’ which is wild.

You can find adorable photos and videos of Grande and Middlebrook peppered throughout both of their social media accounts, though Medium reports he's also worked with Grande professionally in the studio and on tour.

Reportedly, he was the production manager for the massive One Love Manchester benefit concert following the horrific bombing at Grande's concert in May 2017. Medium also reports that he worked with Grande on her Dangerous Woman tour and regularly collaborates with major Broadway talent, too.

Based on his "In My Head" wisdom and staggering experience, he's the kind of best friend I'd like in my corner.