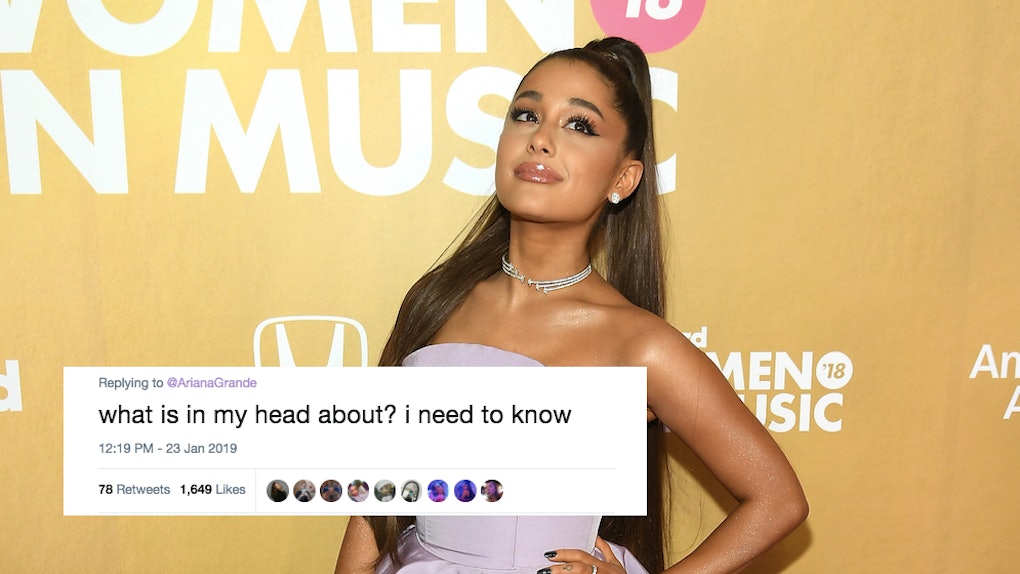 Is Ariana Grande's "In My Head" About Pete Davidson? The Meaning Of It Has Fans Curious

It absolutely mystifies me that singer Ariana Grande can bang out yet another album just half a year after her fourth album, Sweetener, rocked the world. How does she do it? Do her hair extensions have some sort of time machine powers? We'll never know. One thing we do know, though, is that her fifth album, Thank U, Next, will be dropping on Feb. 8, and her fans are living for the tracklist she dropped on social media. But looking at the songs, one might think that a few, in particular, are geared towards Grande's ex-fiancé. For instance, is Ariana Grande's "In My Head" about Pete Davidson? Grande herself took to Twitter to explain the backstory.

On Jan. 23, Grande graced us with a few small gifts on social media, and by small, I mean really freaking huge. She released the cover art for Thank U, Next, which is her fifth studio album, on Twitter, which features a photo of an upside-down Grande (naturally), hugging her chest, with "Thank U, Next" written in graffiti along her neck and chest area, and I feel as though the vibe is just very on-brand with Ariana Grande as a human being:

She then uploaded the tracklist to her Instagram account, which features 12 tracks, three of which the world has already been #blessed with listening to ("Imagine," "Thank U, Next," and "7 Rings," in case you were wondering):

Of these track titles, there are a few that fans had some questions about. Many took to Twitter in hopes that Grande herself would see their tweets, and, of course, she not only saw them but answered them as well (we stan a Twitter Queen, y'all).

One fan asked, "what is in my head about? i need to know," and honestly? Same.

Fortunately, Grande responded to the tweet, and it was... deeply eye-opening, leaving more questions than answers. She wrote,

being in love w a version of somebody you've created in your head. falling for someone that they are not.

OK now, hold up. Is it just me, or does this *sort of* sound like she's hinting that this is what happened with someone from her past (wink wink, nudge nudge Pete Davidson)? Was that perhaps the reason that Grande and Davidson called it quits in the first place?!

After the couple had a quickie romance that led to an engagement in June after just weeks of dating, People confirmed on Oct. 14 that the pair had broken up. An inside source told TMZ, that the pair split during the weekend of Friday, Oct. 12, and their reasoning was because it "wasn't the right time for their relationship to take off."

But why wasn't it the right time for their relationship take off? Was it because Grande made a version of Davidson in her head that didn't reflect who he was in reality?

So, do we know for sure that Ariana Grande had Pete Davidson in mind when writing "In My Head"? It looks like the answer is in one head and one head only, and that's Ariana's.