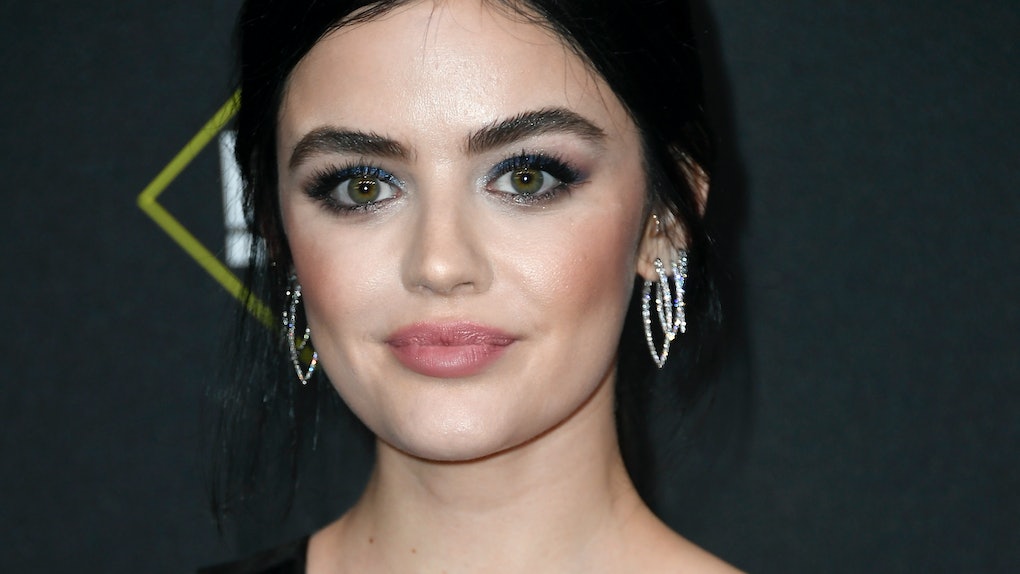 Who Has Lucy Hale Dated? Her Relationship History Is A Wild Ride

If you thought the plot lines on Pretty Little Liars were confusing, then just try figuring out Lucy Hale's relationship history. The tight-lipped actor loves to keep fans guessing, and her latest rumored boo may just be her most baffling hookup yet. On Feb. 22, Page Six published photos of Hale seemingly kissing fellow actor Skeet Ulrich, which is the Katy Keene and Riverdale crossover moment I never knew I needed. However, neither Hale nor Ulrich has commented on the reported PDA, so don't get too excited just yet.

Hale typically doesn't divulge too much about her private life to fans, but she isn't shy when it comes to speaking about relationships in general. During an interview for Cosmopolitan's March 2020 interview, Hale spoke about the pressure she used to feel to always be coupled-up. "When I was younger, I was constantly wanting to be with or date someone because I was so deathly afraid of being single or by myself," she said. "Now, I'm at the point where if I meet someone, they better really elevate my life, because I love being single." All hail Queen Lucy Hale!

Here's the scoop on Hale's dating history over the years before Ulrich.

Hale's first major relationship in the spotlight was with Wizards of Waverly Place actor David Henrie, who Hale reportedly met when she guest-starred on the series in 2007 as Henrie's love interest, Miranda.

The pair reportedly dated for over two years, but when asked by J-14 back in June 2014 if he would ever get back together with Hale, Henrie said it was unlikely. "No, we're friends. We're just buddies now," he said, so it seems like they ended on good terms at least.

Though it's unclear how Hale met the keyboard player from The Cab, Alex Marshall, the two reportedly began dating in 2010. Hale seemingly confirmed the relationship herself when she tweeted, "He bought me a rose," alongside a (since-deleted) pic of herself and Marshall in October 2010.

Their last public appearance together was in July 2011 (and at the time, Seventeen referred to Marshall as Hale's "boyfriend"), but little else is known about their relationship or when they split.

Hale reportedly first met actor Chris Zylka at New Year's Eve party in 2011, per Us Weekly, and they reportedly began dating shortly after. The two went on to date for several months before Zylka seemingly confirmed their breakup on Twitter. When a fan tweeted at Zylka to say his "girlfriend is gorgeous" in September 2012, he replied, "Don't have a girlfriend. She decided she was too good."

The actor later apologized in a series of tweets, which — like the original tweet — have since been deleted. "I'd like to apologize about my previous comments," he wrote. "Lucy is not only one of the most talented people I've ever had the pleasure of knowing, but also one the most beautiful, inside and out. Anyone who's ever watched, or had the pleasure of meeting her, knows this to be true." Hale never commented on their relationship or breakup.

In June 2013, Hale confirmed she was dating actor Graham Rogers during an interview with Us Weekly. "He is such a sweetheart," she gushed. "We are having a good time." According to Hale, she and Rogers "started out as friends" before their romance blossomed. "He is a good guy," she added. "And I am past the bad-boy stage."

Not long after, Hale and Rogers took a romantic trip to Hawaii before they reportedly went separate ways in September 2013, per Us Weekly. Neither actor ever commented on their split.

Hale was first spotted with country singer Joel Crouse at a Lakers game in April 2014. Following the game, Hale shared a (since-deleted) IG pic with Crouse, which she captioned, "First lakers game. Was really great teaching this one the rules of the game. And seeing him looking like a kid in a candy store @joelcrouse." Soon after, a source for Us Weekly reportedly claimed they were dating. "They are seeing each other," the insider reportedly claimed. "He is in L.A. right now to visit. It isn't anything serious just yet."

Just a few months later, a source for Us Weekly reportedly confirmed their breakup. "Lucy and Joel are done," the source reportedly claimed, adding the pair broke up because "it was hard with the distance" and Hale's work demands. Neither Hale nor Crouse ever commented on the reported split.

A few months after her reported breakup with Crouse, Hale reportedly stepped out with another musician. In September 2014, Hale was reportedly spotted with Lawson drummer Adam Pitts as they shopped in Beverly Hills, per the Daily Mail.

Though no breakup was ever announced, the last public sighting of the two was in March 2015.

Hale's longest relationship to date was with musician Anthony Kalabretta. The two were first romantically linked in June 2015 after they were reportedly spotted at a Dodgers game, and not long after, the maybe-couple reportedly took a trip to Hawaii to celebrate Hale's birthday. "They met through mutual friends and bonded over a lot of things — just having fun and their shared love of music," a source for Us Weekly reportedly claimed at the time.

Though breakup rumors started circulating in early 2016, Hale seemingly shut those rumors down during a September 2016 interview with People. "[It's going] good," she said of the relationship. "He's great." However, by May 2017, the two were reportedly done for good. Just a month after their reported breakup, Hale tweeted a photo of herself and Kalabretta in front of a helicopter, so it seems things are cool between them, even if they didn't decide to rekindle their romance.

On Valentine's Day in 2018, Hale was reportedly spotted kissing Riley Smith, her Life Sentence co-star, according to a source for Us Weekly. However, the maybe-relationship was short-lived.

By July 2018, a source reportedly for Us Weekly claimed Hale and Smith went their separate ways shortly after it was announced Life Sentence wasn't renewed for a second season. "Riley and Lucy are no longer dating," the source reportedly claimed, adding, "It just didn't work out." Neither actor ever commented on the rumored relationship or their reported breakup.

The same day a source confirmed Hale and Smith's July 2018 split, Hale was reportedly spotted holding hands with actor Ryan Rottman at a Starbucks, according to photos obtained by Just Jared.

However, little else was heard about the maybe-relationship after that initial sighting, and dating rumors quickly fizzled out.

Hale was briefly linked to former Bachelor Colton Underwood in July 2020, shortly after Underwood's split from Cassie Randolph. Rumors about a potential romantic relationship between the two started swirling after they were reportedly spotted hiking the Paseo Miramar Trail in Los Angeles. A source for TMZ reportedly claimed the maybe-couple had gone on a few "casual hike dates," and an insider reportedly told People they connected over Instagram DMs. "They are very casually dating," the source for People reportedly added.

However, little else was heard about the potential romance following their rumored hiking date. Neither Hale nor Underwood ever commented on the relationship rumors.

In February 2021, Hale left fans shook after she was reportedly spotted kissing actor Skeet Ulrich in L.A., according to photos obtained by Page Six. The maybe-couple has yet to confirm the relationship themselves, so only time will tell what's going on between these two (if anything).

Something tells me that — even if Hale isn't serious about Ulrich — she's going to be A-OK on her own.