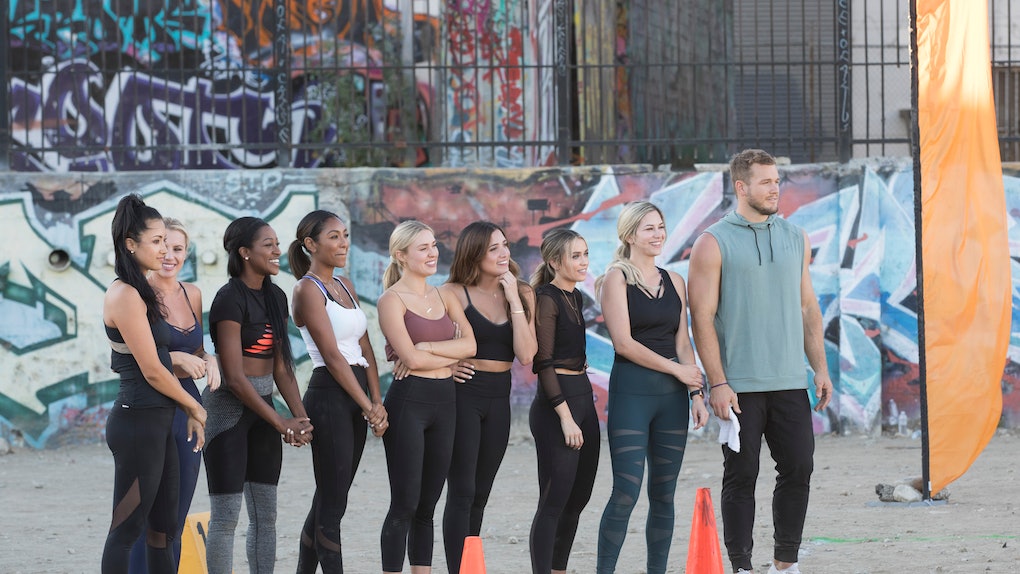 Who Goes Home On 'The Bachelor' Week 3? 4 Girls Left The Mansion

On The Bachelor, Colton Underwood's number of contestants vying for roses is beginning to dwindle. The cuts made in a season's first few weeks are always substantial, marking that awkward phase where you may or may not remember an eliminated woman if she pops up on Bachelor in Paradise this summer. Still, this week's crop of rose-less contestants definitely ushered in memorable moments that are the exact fuel of flawless Paradise cast intros. Who goes home on The Bachelor Week 3? Bri, Catherine, and Nina were eliminated at the rose ceremony, while Caitlin was sent home while on a group date.

Prompting vivid flashbacks of your middle school field trip to Medieval Times, Colton's first group date this week brought the ladies to what was essentially the pirate version of the "Best of the Knights" dinner show. After half of the women experienced a swashbuckling adventure on a pirate ship, the majority of the other contestants joined Colton at a boot camp to single out who was the strongest woman. This season has already been better than most when it comes to guest stars, proving true once again when the boot camp date featured Brooklyn Nine-Nine's Terry Crews and his wife Rebecca.

However, one of the women's actions soon overshadowed the adorable duo's coaching. At the group date's cocktail party, Caitlin, the "I popped your cherry" girl, finally had some significant one-on-one time with Colton, but other than the two's different conceptions of what a cherry looks like, their compatibility was severely lacking. Although she scored the one-on-one time she wanted, Caitlin blanked on stories she could share with him. Not feeling any chemistry with her, Colton sent her home that night, but Caitlin's resemblance to fellow Canadian Kaitlyn Bristowe should earn her a guest spot on the former Bachelorette's podcast soon.

Following a pool party replacing the more formal cocktail hour, Colton's rose ceremony farewells were for Catherine, Bri, and Nina. FYI, that's three less blondes to keep track of, but it also marks the exits of women with particularly memorable Night One entrances. While the Croatian-speaking Nina was included in a stream of women introducing themselves in foreign languages, Catherine came equipped with her dog and a tendency to interrupt other women's time with Colton.

Episode One's framing of Catherine as a villain clearly wasn't meant to pan out, but the season premiere's focus on Bri and her faux Australian accent was just cruel to never follow up on Colton learning the truth. A deleted scene released online clarified that Bri did tell Colton she faked the voice before the first rose ceremony, but perhaps he lost some interest in her after she admitted to being as normal as the rest of the women.

At this rate, picking out Colton's favorites among the bunch isn't too difficult, but on the other hand, it looks like he doesn't keep around contestants who inspire plenty of gold-star tweets. We'll keep our fingers crossed for more fake Australians and doggy sidekicks on Bachelor in Paradise.