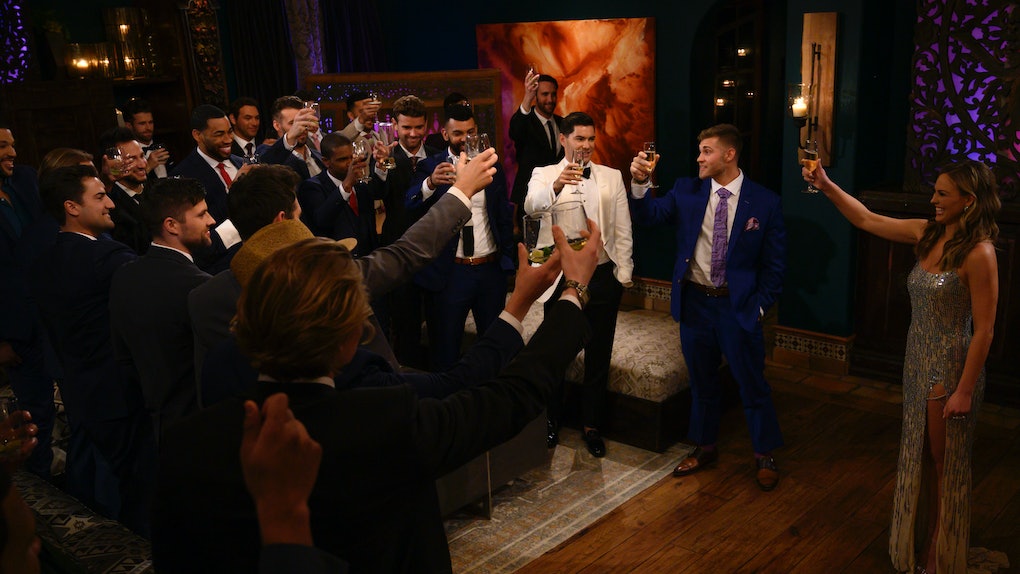 Who Gets Hannah's First Impression Rose? The Bachelorette Fell Hard For Luke P.

Kiss the virginity jokes goodbye and welcome all the beastly growls, because Hannah Brown has moved her Bachelorette men into the mansion. The former Miss Alabama met her 30 contestants on May 13's season premiere, and while stepping into the Bachelorette's shoes is tough, picking someone to receive the first impression rose has become even trickier. Its recipients on the past four Bachelorette seasons have ultimately proposed to their leads, so the tradition has become a strong sign of who may win the Bachelorette's heart. Who got Hannah's first impression rose? Luke P. snagged the special rose on Night One.

When Hannah, 24, was announced as the new Bachelorette on Colton Underwood's "After the Final Rose" special, she met five of her contestants right away. Cam, Connor S., Dustin, Luke P., and Luke S. impressed her so much that host Chris Harrison allowed her to hand out a rose. Hannah gave it to Cam because of his goofy rapping (did he ever figure out that she wasn't the rapping Hannah?), but fans wondered if that counted as the all-important first impression rose. ABC executive Robert Mills confirmed on Twitter that it didn't, meaning that Cam isn't necessarily the one to see as ultimate husband material throughout the season.

But it turns out that one of the other men from "After the Final Rose" has now caught Hannah's eye. Luke P., a 24-year-old import/export manager, stood out in that March episode for telling Hannah that she was the only one he wanted to be the Bachelorette. He left her speechless that night, and although Cam's flashier presentation caused more buzz, Luke was technically the first man to meet Hannah. Sure sounds like the making of a first impression rose recipient to me.

During his limo exit, Luke definitely took the flashy approach. Jumping up onto the roof of the car, he growled, clearly in full "beast mode." Hannah recognized him from "After the Final Rose," which probably fueled Luke's confidence in delivering his next line. "I know they call you the Beast," he said, "but I'm king of the jungle and I'm hoping that we can change your title to my queen."

Hannah didn't seem in love with that prospect, but she gave him a willing smile and said they'd have to see. After all, who ever said that the Beast was never her own queen?

Their connection deepened when Luke was the first to steal Hannah away from the group toast. During their one-on-one time, he talked about his new niece and feeling behind his brother and sister-in-law, who signed him up for the show. He even claimed to have fallen for Hannah the second she appeared on The Bachelor. "I don't know you all that well, but I'm seriously really, really into you," he said. "You've got some catching up to do."

Luke was smitten, but his real shining moment came after Hannah sent home Scott, the contestant who supposedly had a girlfriend at home. As other men talked about giving Hannah time alone before approaching her, Luke swept in to comfort her and assure that he was completely there to win her heart.

The gesture was enough to win him the first impression rose. "You said to me that you already felt something as soon as you saw me, and I feel the exact same way," Hannah told him. "I'm excited when I get to talk to you and I look forward to getting to know you better."

Currently living in Georgia after growing up in Florida, Luke may be the good old Southern boy who's perfect for Hannah. His Bachelor bio reads:

He prides himself on being able to get along with anyone, and he loves team sports. After a religious awakening in college, Luke decided that when he dates, it's for marriage. To Luke, "for better or for worse" means unconditional love. Luke seems to be everything Hannah wants in a husband. Is this a match made in heaven, or is it all too good to be true?

It would be pretty amazing if Hannah's pick results in a proposal at the end of the season. A woman's intuition has proven to be strong in the past, so Bachelor Nation will have to wait and see if Hannah joins this club of Bachelorettes who knew their best match from the very start.