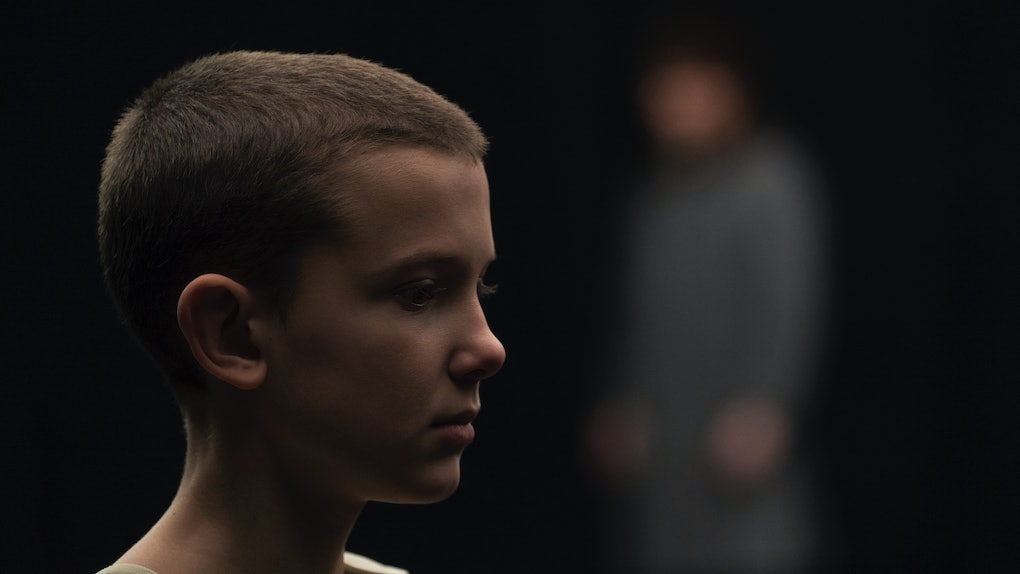 Who Are The First 10 On 'Stranger Things'? Fans Are Wondering Their Identities

Stranger Things Season 1 filled us with all sorts of unanswered inquiries that have bothered us ever since last year. Where did Eleven go? What is that slug thing that Will coughed up in the season finale exactly? Will there ever be #JusticeForBarb? We could go on, but there's one annoying burning question worming inside our brain. If Eleven's nickname comes from the fact that she was branded "011," what happened to the people that represent the numbers that came before her? Who are the first 10 on Stranger Things and will we ever meet them?

Eleven's past is about as mysterious as it gets. She was apparently born in a lab that practiced controversial government experiments. She possesses magic powers — telekinesis, extrasensory perception, visiting other dimensions. She also has an exceptional appetite for Eggo waffles, but we'll just chock that up to the fact that she's hungry and they're delicious. What we don't know about her is, well, a lot more than we actually do. But we have to wonder if there are more like her out there, because considering her intriguing namesake and the evidence surrounding her past, she's not alone.

Eleven's origins are not entirely clear but we can trace her existence back to Terry Ives, who has an, er, complicated history with Hawkins Lab. Terry was the catatonic lady who Hopper and Joyce visited in Season 1 that had previously claimed Dr. Brenner stole her daughter Jane. Raising your eyebrows yet? Basically, Terry participated in government experiments back in the '70s that involved sensory deprivation and mind-altering psychedelic drugs. Unbeknownst to her, she was pregnant at the time and was informed she had miscarried in her third-trimester. But this is Stranger Things, and nothing is at it seems, so naturally we have other theories in mind. We can only assume that Jane is Eleven and Terry is Eleven's biological mother. Eleven was kept in the hands of Brenner and the lab due to her exceptional abilities, but she couldn't have been the only test subject there.

Eleven or "011" means she's the eleventh subject out of who knows how many? Her label indicates that there must have been a 1-10 that preceded her time. Perhaps the other subjects didn't make it, or worse — they were killed because they didn't yield such a valuable result. 1 through 10 could also refer to others who had previous ties to the program, such as Terry. Of course, in addition to wondering if these ten mysterious figures are out there, will we meet them in Season 2 or in the future? How cool would it be to see Eleven team up with her powerful band of super-counterparts? We're just worried about all those nosebleeds.

Some fans have speculated that a new character coming to Hawkins, Roman, could have ties to Eleven in a major way, so maybe she'll bring some insight. Roman's casting notice described the character as "between the ages of 30 and 38. After growing up homeless with a drug-addicted mother, he or she suffered a great loss at an early age and has been seeking revenge ever since. Roman is ultimately an outsider who doesn't understand how to connect with people." If she has ties to the lab in some way, it's possible that she's one of the ten... especially if she's older than Eleven. Because that's how time works.

We have a feeling we'll get some answers in Season 2, unless they pull a Lost on us and numbers don't actually hold as much significance as we would like. Oct. 27 can't come soon enough, but at least we have a new badass clip of Eleven escaping the Upside-Down to hold us over (and keep us guessing).

More like this
The Netflix Reality Show You Should Watch, Based On Your Zodiac Sign
By Chelsea Jackson
'The Circle' Season 2 Cast's Instagrams Show Off Their IRL Social Media Skills
By Abby Monteil
In 'Riverdale' Season 5, Toni Topaz Is The Black Superwoman Without A Cape
By Erika Hardison
Stay up to date