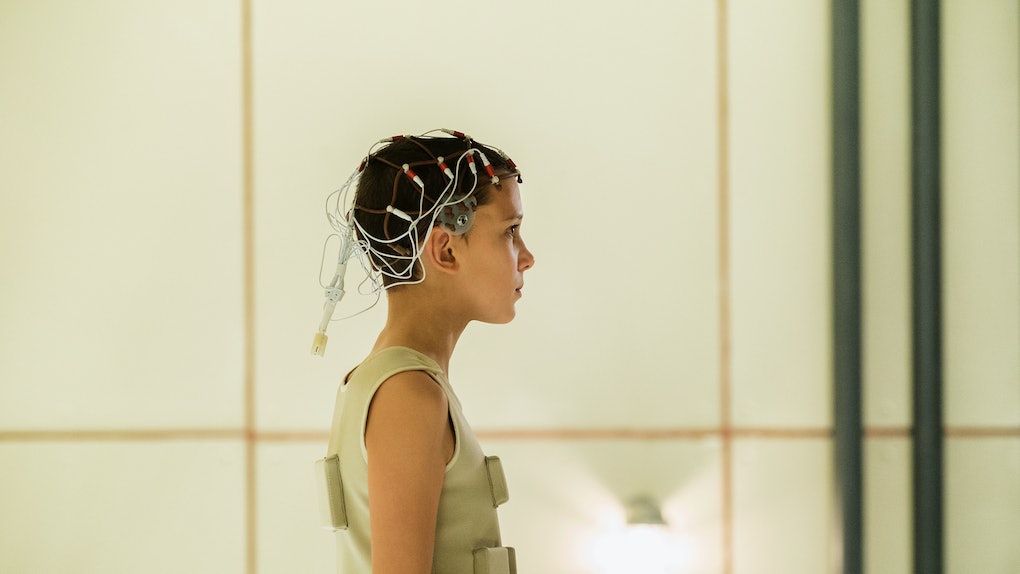 Who Is Terry Ives? 'Stranger Things' Character May Be Eleven's Mom

Rejoice, Stranger Things fans. The buzzy sci-fi series is returning in less than one month and we're gearing up to watch more spooky adventures in the town of Hawkins, Indiana. But last season's eight episodes were so jam-packed with action it's almost impossible to remember everything that went down. Plus, you may have even forgot about some of the major (and minor) players. Who is Terry Ives? A character who's possibly flying under your radar may be the key to Eleven's story.

When you think of Stranger Things, you probably immediately think Demogorgon, the Upside Down, and anxious Joyce Byers with that whole meme-able tangled Christmas lights situation. But there were so many twists and turns and elements that were integral to where the show stands now and who's involved. Terry Ives was an intriguing piece of the puzzle that is Eleven, her beginnings, and the truth behind Hawkins National Laboratory. You may recall she was the woman who Hopper visited when it was revealed she sued Dr. Brenner (AKA Eleven's "Papa") for kidnapping her daughter. This only opened up a Pandora's Box of information, including the possible revelation that that daughter, Jane, actually equals... who else? Eleven. Are you getting all this? OK, here are a few things we know about Terry Ives so Season 2 isn't all a big "what is happening?!" onslaught on your TV-watching brain.

1. She Was a Test Subject for MKUltra

Terry participated in a government-controlled study by Dr. Brenner (Matthew Modine) and was placed in sensory deprivation isolation tanks and exposed to copious amounts of psychedelic drugs for an experiment meant to develop mind-control techniques.

2. She Was Pregnant at the Time

Terry was unknowingly pregnant at the time of these experiments and was then told that she had miscarried her daughter in the third-trimester of carrying the baby. But she knew her child was still alive and out there somewhere. She even tried to take legal action with a lawsuit against Dr. Brenner, claiming he had taken her from her, but her attempts were unsuccessful as the evidence was lacking and the powers at work were stacked against her.

3. Hopper and Joyce Visited Her

When Hopper and Joyce Byers went to visit Terry in Season 1, they spoke to Terry's sister Becky. Becky explained that Terry had gone into a catatonic five years ago and was unresponsive to questions. Becky also said Terry still held out hope that her daughter Jane, who would now be 12-years-old, might come back. She even kept Jane's baby room in tact. Becky didn't appear to be a believer in Jane's existence, but you can always count on Hopper to keep investigating. And what caused Terry to reach the catatonic state she was in? Will we get more intel from her as the series goes on? Her time on the show was too short and her past is too juicy not to delve into further. She's probably Eleven's biological mom, for goodness sake. Which brings us to the most important aspect...

Duh? Terry believed Jane had been born with unique and exceptional telekinetic abilities that would make her useful to the government. Hmm. Telepathy and special psychological skills? Sounds like someone we know. And 12 years old? You don't say...

Season 2 is going to go deeper into where Eleven came from and how she became the exceptional can-control-stuff-with-her-mind-at-will young superhero she is today. "We do get into her story and backstory. We learn about where she came from and how she came into the world and the program that resulted in her," creator Matt Duffer told EW. The latest trailer for the upcoming episodes, released on Friday the 13th, also gives us some insight into what we should expect when it comes to everyone's favorite telekinetic tween. It looks like she's back with a vengeance and using her awesome powers to open up pesky locks. Said lock, as Buzzfeed and Reddit users have pointed out, may just be the entry to the doorway at her long-lost mom Terry's house. Is a family reunion in the works? Is Eleven finally going home? Like, an actual home. Not the woods where she keeps her Eggo stash. “She has a storyline this season for her, and it’s an emotional transition. Last season I didn’t get to expand [on the character] — this season is giving me that opportunity," Millie Bobby Brown also revealed to EW.

We're hoping that storyline leads her back to the mother who has been waiting for her for over a decade. We'll find out more when Stranger Things comes back on Oct. 27. *Cue the collective squeals of excitement.*