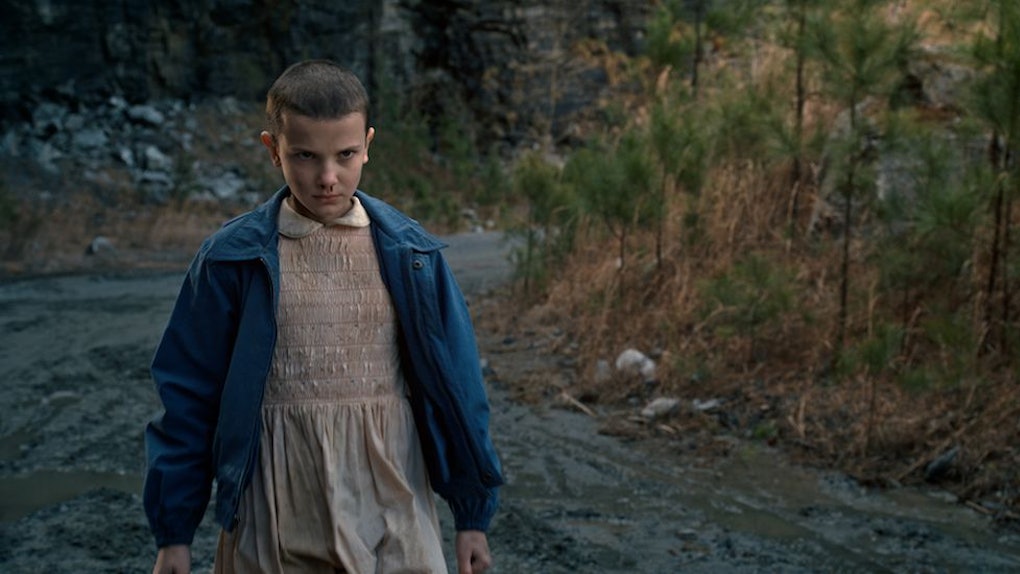 What Happened To Eleven In 'Stranger Things' Season 1? Refresh Your Memory Before Season 2 Airs

Stranger Things comes roaring back this month to Netflix, just in time for Halloween. All the monsters will be back, along with the '80s movie references, all the period piece technology, and Winona Ryder eating scenery like it was her last meal. It will be glorious. But the biggest mystery of all concerns Millie Bobby Brown's character, Eleven, and how she will come back after exiting to the Upside Down. But before we can consider what will happen to her in the new series, let us consider what happened to Eleven in Stranger Things Season 1, and how that affects the story going forward.

Eleven-mania may not be running wild in the streets of Hawkins, Indiana right now, but the fever is catching on in the fandom here in 2017. This week saw Eleven get her own sneak peek clip ahead of the Season 2 premiere. Released at London's Comic-Con, the video gave us a glimpse of how Eleven will be getting back to Earth after the Demogorgon seized her and the two disappeared into the Upside Down, seemingly for good.

Stranger yet, the video seems to be set before the events of Season 2, where Eleven has a good year's worth of hair growth in the trailer.

Let's discuss everything we know about how she got to this point, in chronological order

She Was Going To Be Jane Ives

More than halfway through the first season, Chief Hopper and Joyce Byers, desperate for information as to what is happening in the "Department of Energy" building that seems connected to the Upside Down, take a visit to Terry Ives. Ives was part of a controversial government program known as MKUltra. She underwent tons of tests, many of which involved sensory deprivation and LSD.

She also was pregnant. The child who she carried was stillborn at 8 months, but she knew better. She believed her child was alive and would come home one day.

The baby, who we assume is Eleven, had extraordinary psychokinetic abilities. Most of her years in the lab were spent with scientists testing her abilities, including experiments with coke cans, eavesdropping, and in one horrid one, a cat. (Rather than kill the cat, she killed a couple of guards instead.) Punishment for failure was solitary confinement in a cell.

Opening The Upside Down

The "eavesdropping" experiments were where things first went sideways, or should we say, upside down? The scientists wanted her to eavesdrop on a Russian spy. Instead, trapped in the sensory deprivation tank, she overheard a monster, the Demogorgon, resulting in the wall between universes cracking open.

In terror at what she had done, Eleven escaped via the sewers. She wound up sneaking into Benny's Diner, where the poor old softie gave her clothes, food, and tried to call social services.

Instead, the scientists from Eleven's lab came and shot Benny dead. Fleeing in terror, Eleven ran out into the woods and the rain, only to run right into Mike Wheeler and pals, who were searching for Will Byers.

Mike Wheeler was a good kid. Despite the insanity of doing so, he brought her home and stashed her in his basement, sneaking Eggo waffles to her for food. Eleven refused to reveal herself to the adults, fearing more killings.

She tried to explain the Upside Down to Mike and his friends, but lacking much English, she couldn't explain that Will Byers was actually very close to home, just in the wrong dimension. When a body turned up (planted by the scientists to make questions about the boy go away), Mike called her a liar.

To prove Mike was alive, Eleven used radio signals to connect to the Upside Down. The boys took her to school (in a hilarious wig and pink dress) to see if their bigger AV system could make contact. Eleven also protected them from the school bullies.

Eleven was trying to protect the boys by keeping them away from the Hawkins lab. When they realized, she lost her temper and threw Mike's buddy Lucas into the air, terrifying everyone. In the end, it was all okay, and they forgave her (Mike even invited her to the school dance and kissed her), but it was a reminder of how powerful she was.

Going Into The Upside Down

When Hopper discovered Eleven, and the boys explained her abilities, she contacted Will in the Upside Down via a homemade sensory deprivation tank. But Hopper had made a deal with the scientists to return her after he found her. In response, she killed all the goons who came to take her away, drawing the attention of the Demogorgon with their blood.

The monster gave chase, but Eleven wasn't having it. To save her friends, she pinned the Demogorgon against a chalkboard and disintegrated it with her mind, falling into the Upside Down as she did so.

And now, she's returned, birthed via the school logo. How long until Mike and friends find her again?