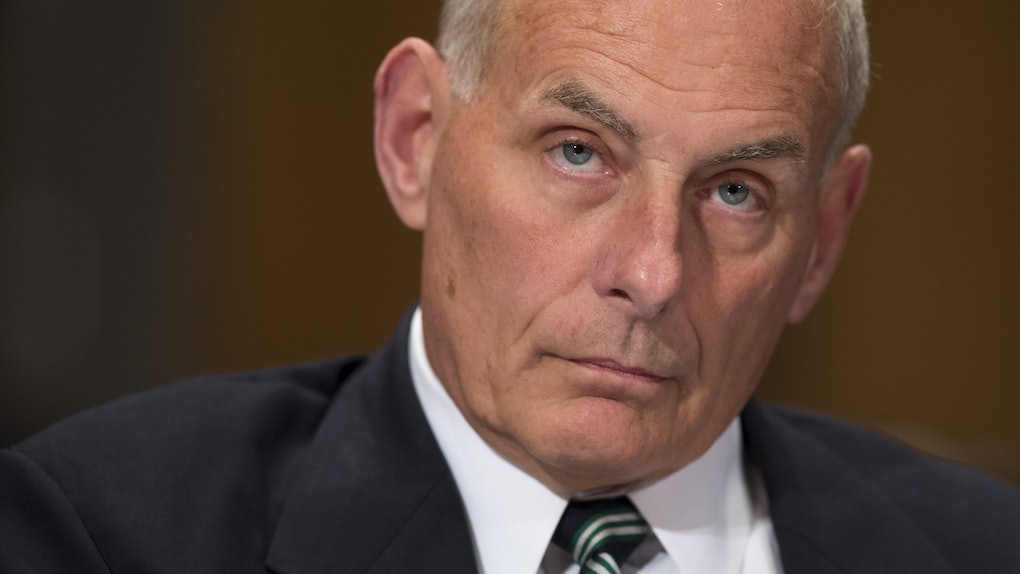 The Trump Administration continues its bizarre quest to rewrite history. This time, it comes from President Trump's apparent voice of reason. On Oct. 30, White House Chief of Staff John Kelly made controversial remarks about the Civil War, saying, among other things that it was the result of "a lack of ability to compromise." Kelly's remarks caused an uproar on their own. And now, the White House's response to John Kelly's Civil War comments has made critics downright apoplectic.

On Oct. 30, Kelly praised Confederate General Robert E. Lee on Laura Ingraham’s Fox News show, calling him "honorable," and saying that compromise could have helped the U.S. avoid Civil War. He said that "the lack of an ability to compromise led to the Civil War, and men and women of good faith on both sides made their stand where their conscience had them make their stand."

Naturally, his comments did not go over well.

Nevertheless, the White House doubled down. Press Secretary Sarah Huckabee Sanders said at an Oct. 31 press briefing that there’s a “pretty strong consensus” that Kelly is right. She defended his comments by saying that his point was that "all of our leaders have flaws." She also said, "we can’t erase the fact that [history] happened."

When a reporter asked exactly what compromise Kelly was referring to, Sanders responded,

I’m not gonna get up here and re-litigate the civil war, but there’s certainly, I think, some historical documentation that many people — and there’s pretty strong consensus. People from the left, the right, the north and the south, that believe that if some of the individuals engaged had been willing to come to some compromises on different things, then it may not have occurred.

Sanders left the briefing as reporters shouted further questions about the White House's stance on the Civil War and slavery.

His comments outraged many, including historians who called his comments "strange" and "dangerous," according to The Washington Post. Kelly's comments also caught the attention of many journalists and media personalities, including MSNBC's Joy Reid, who called for rethinking Kelly’s reputation as Trump’s voice of reason.

"Many factors contributed to the Civil War," Burns tweeted. "One caused it: slavery."

The Trump administration has somewhat regularly found itself embroiled in controversy related to the Civil War.

Back in May 2017, according to the Associated Press, President Donald Trump questioned why the Civil War happened — and puzzlingly asserted that people don't ask that question, despite the fact that American students learn about the Civil War as early as elementary school. He also said that if Andrew Jackson had been president, "you wouldn't have had the Civil War" — although Jackson, who was himself a slaveowner, died more than a decade before the war began.

And, of course, after the August white supremacist gathering in Charlottesville, Virginia — protesting the removal of a Confederate statue — left one anti-racist counter-protester dead, Trump said there was "violence on both sides" and added there were some "very fine people" among the alt-right and Nazi protesters.

Trump additionally tweeted that he was "[s]ad to see the history and culture of our great country being ripped apart with the removal of our beautiful statues and monuments."

When Kelly joined the Trump cabinet, he was sold to us as a voice of reason and a means by which Trump — who is often prone to outbursts and name-calling — might be kept under control. But his comments on the Civil War show that he fits right into the Trump White House.