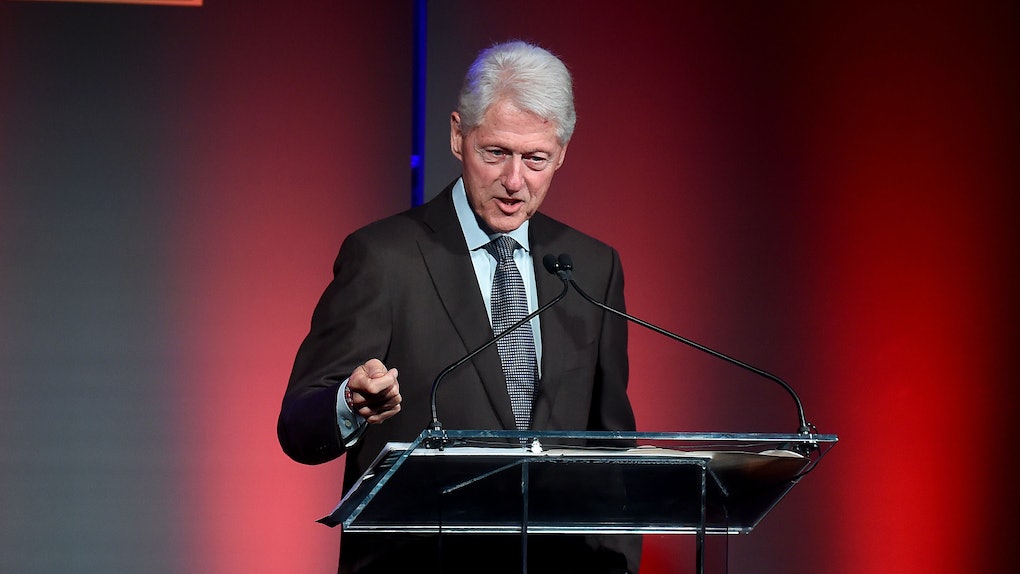 Which Presidents Have Been Impeached? Not As Many As You'd Think

Now that Democrats have launched an impeachment inquiry into President Donald Trump, you may be wondering what kind of precedent there is for this. Well, if the House votes to impeach Trump, he won't be alone, because other presidents have been impeached in the past. Which ones? It may come as a surprise that Richard Nixon was not one of them.

Only two presidents in American history have been successfully impeached by the House of Representatives. First, the House impeached Andrew Johnson in 1868. Then, more than a century later, the House impeached Bill Clinton in 1998. Neither of these men had to step down from the presidency, however, because their Senate impeachment trials resulted in acquittals. As for Nixon, he actually resigned before he could be impeached over the Watergate scandal, per the Los Angeles Times. He was later pardoned by his successor, President Gerald Ford, for any crimes he may have committed in office.

Democrats have been ramping up calls for Trump's impeachment in recent months, and demanding his removal from office. In a statement shared with Elite Daily, the White House characterized the impeachment inquiry which was announced on Sept. 24 as Democrats' attempt to "weaponize politics." It's worth noting, however, that neither of the two presidents who were impeached were actually removed from the White House. That's because the process to impeach a president is different from the removal of office process — and it's much harder to remove a sitting president from office than it is to impeach them.

Congressional lawmakers are still drawing up articles of impeachment for Trump, but why were Johnson and Clinton impeached? In Johnson's case, his impeachment was one of the consequences of the turbulent period following the Civil War and Abraham Lincoln's assassination. According to HISTORY, Johnson breached the Tenure of Office Act, which dictated that a president could not remove a Senate-approved elected official without the Senate's consent.

After multiple attempts, in early 1868 Johnson defied the Act by replacing his Secretary of War Edwin Stanton with General Lorenzo Thomas, without congressional approval, in late February 1868. The House of Representatives therefore impeached Johnson on Feb. 24, 1868, but the Senate was just one vote short of achieving the two-thirds majority they needed to remove him from office. Johnson finished out his term, but did not get his party's nomination to run for re-election in 1868.

More than a century later, Clinton was impeached for a completely different reason. Clinton's impeachment case all started with a sexual harassment lawsuit that was filed against him in May 1994 by Paula Jones, a former Arkansas state employee. After Clinton failed to disclose his relationship with White House intern Monica Lewinsky during testimony in the harassment case, he was accused of perjury and obstruction of justice, and was ultimately impeached on Dec. 19, 1998. (The lawsuit with Jones was eventually settled for $850,000.) The House voted to impeach Clinton on the grounds that he had allegedly lied to the grand jury about Lewinsky and allegedly encouraged her to lie as well. Like Johnson, however, Clinton was not removed from office. Instead, he was acquitted of both perjury and the obstruction of justice, and served out the remainder of his term.

One president who was not impeached, though — as mentioned previously — was Nixon. Though Tricky Dick's name has become fairly synonymous with impeachment thanks to the Watergate scandal of the 1970s, he actually chose to step down in the face of near-certain impeachment and removal from office. Ford later gave the ex-president a blanket pardon for any crimes committed in office in order to allow the country to move on.

If Trump is indeed impeached, he will be joining a rather small but infamous club. There is precedent for presidential impeachment — but not so much for removal, which is what Trump's Democratic opponents ultimately hope to achieve. The Democratic-led House stands a good chance of impeaching Trump, but the Republican-led Senate may be less eager to remove the leader of their party from the White House.