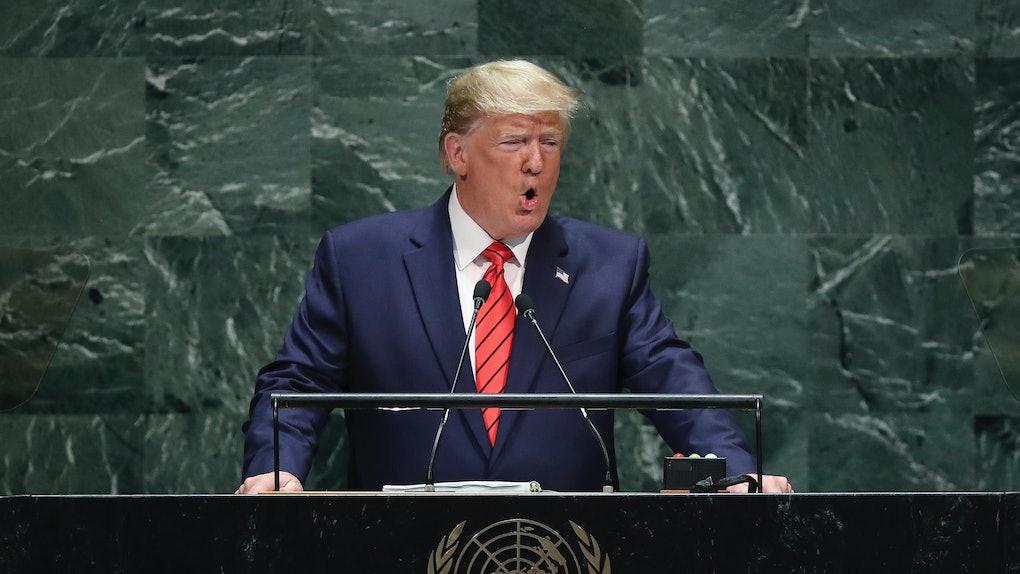 These Are The Steps To Impeach A President, In Case You Were Wondering

Some Democrats have been calling for President Donald Trump's impeachment for a long time — and it seems that party leaders are finally on board. After a whistleblower complaint against the president came to light earlier this month, House Speaker Nancy Pelosi announced on Sept. 24 that the House would launch a formal impeachment inquiry against Trump. In response to this impeachment inquiry, White House Press Secretary Stephanie Grisham told Elite Daily that "President Trump is working hard on behalf of our country here in New York City while [Democrats] continue to scream the word impeachment." But what are the steps to impeach a president? The process is a lot more complicated than many Americans may realize.

More than 200 House Democrats support launching an impeachment inquiry against Trump, but that doesn't mean that impeachment is guaranteed. The Constitution gives Congress the right to impeach a president if a certain quota of elected officials vote to do so on the basis of “treason, bribery, or other high crimes and misdemeanors.” According to The New York Times, only two presidents in American history have been impeached — Andrew Johnson in 1868 and Bill Clinton in 1998 — and both of them were eventually acquitted, so they didn't have to step down. Richard Nixon, on the other hand, resigned from the presidency in 1974 before he could be impeached.

Impeachment is a long and tricky process. First, a member of the House needs to introduce articles of impeachment. Throughout Trump's presidency, multiple lawmakers have done so. The second step, however, is what has stumped House Democrats until now — the Speaker of the House needs to sign off on proceeding with an impeachment inquiry. After that, the House Judiciary Committee typically assesses the impeachable offense allegations to the president and votes on each of the articles before passing it to the full House. The House then takes a vote on whether or not to impeach the president, after which the Senate votes on whether or not to remove the president from office.

Elected officials can only introduce impeachment proceedings if they can prove that the president has committed "high crimes and misdemeanors" cited in the Constitution, and these go beyond any normal crime. Instead, they refer to abuses of power and betrayals of public trust by people in positions of power. Once articles of impeachment have been introduced, the House Speaker must decide whether to proceed with them — and that's precisely what Pelosi did this week. Pelosi's decision to launch an impeachment inquiry came after a whistleblower filed a complaint against Trump, on the grounds that the president allegedly made a troubling "promise" to Ukrainian leadership. During a press conference on Sept. 20, Trump told reporters the complaint was "ridiculous" and that whoever filed it was "partisan."

“The fact is that the President of the United States, in breach of his constitutional responsibilities, has asked a foreign government to help him in his political campaign at the expense of our national security, as well as undermining the integrity of our elections," Pelosi said on Sept. 25, per CNN.

In the past, the House Judiciary Committee has investigated the allegations leading to the impeachment inquiry and then recommended whether or not to bring articles of impeachment to the rest of the House. However, The New York Times reported that the House could also conceivably organize a panel or a direct floor vote on its articles of impeachment without going through a committee first. That being said, six House committees are already looking into Trump's allegedly impeachable offenses, per the Times. In response to these investigations, Grisham told Elite Daily that “the Democrats continue to weaponize politics when they should be working on behalf of their constituents, which is nothing new."

Any impeachment articles that receive a majority vote in committee will then be passed on to the rest of the House. When the full House takes a vote, with any article of impeachment that receives a simple majority vote — that is, greater than 50% — Trump will effectively be impeached. However, impeachment doesn't automatically lead to removal from office.

If the House does manage to pass one or more articles of impeachment, the proceedings move to the Senate, where lawmakers would be responsible for holding an impeachment trial. The bar for removal is higher than it is for impeachment. Unlike in the House, where a simple majority vote suffices, at least two-thirds of the Senate would need to vote to convict the president on impeachable offenses. If 67 senators vote to do so, then Trump would be removed from office. Democrats currently control the House, so impeachment articles could conceivably pass there, but Republicans hold the Senate, and it is unlikely that they will vote to remove their own president.

So what happens if the House votes to impeach, but the Senate doesn't achieve the two-thirds majority it needs to uphold that conviction? In that case, Trump will have been impeached but will able to continue serving as president. This is what happened to both Johnson and Clinton; both were impeached, but both of their impeachment trials before the Senate failed to yield a two-thirds vote. And even if 67 senators did vote for Trump's removal, they would still not have the power to send him to jail. If Trump were to face any criminal charges for his actions, that would come later, per NBC News.

Even if Trump's removal from office would not be easy to achieve, Pelosi's decision to launch an impeachment inquiry against him follows months of impeachment demands from her fellow Democrats. The decision is a critical one — with the 2020 presidential election approaching, Democrats will have to make sure that impeachment doesn't overshadow their policy proposals, while Republicans have to decide whether Trump is worth keeping in office for the duration of his term. Either way, lawmakers have a long road ahead of them, because impeachment certainly isn't easy.