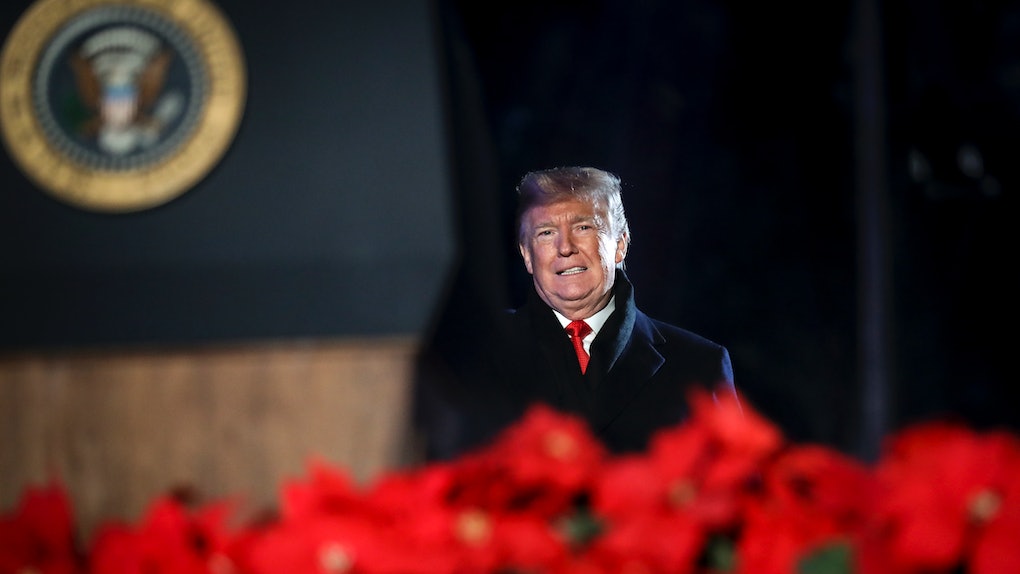 Where Will Donald Trump Spend Christmas? Apparently Not At The White House

Happy holidays everyone! Well, maybe not quite yet, but close enough. As 2018 comes to a quick close, many of us can't wait to reunite with family and spend the holiday season relaxing with loved ones. Well, it looks like one particular world leader is feeling the same sentiment. So, where will Donald Trump spend Christmas? He's reportedly heading down south.

According to The Hill, President Donald Trump plans to spend a two-week holiday at his South Florida resort Mar-a-Lago from Friday, Dec. 21 to Sunday, Jan. 6. The news of Trump's reported trip came from the Federal Aviation Administration advisory, when they warned pilots on Thursday, Dec. 13 that airspace over Mar-a-Lago will be restricted over those two weeks due to a "VIP" in the area, which usually implies a presidential visit.

Look, everyone deserves a vacation every so often, but when you're the President of the United States, maybe two weeks is a bit of a stretch. Plus, according to The Washington Post, as of June 2018 Trump had already taken 17 trips to Mar-a-Lago dating since February 2017, which is quite a lot in less than a year and a half.

Not only is Trump's reported trip lengthy, but it couldn't come at a more inopportune time. If his travel plans turn out to be true, that means he plans to fly out on the day of the government shutdown deadline. It's no secret that Trump has been fighting for funding for the infamous U.S.-Mexico border wall, but as of recently he's been threatening to shut down the government if the wall doesn't receive his proposed $5 billion funding. Of course, Trump posed similar threats in July and September, but this time it looks like the president is taking his warning to the next level.

On Monday, Nov. 28, Trump told Politico that he'd "totally be willing" to shut down the federal government if Congress doesn't approve the $5 billion border wall budget. At first, some of us might have doubted the president's seriousness, but over the past few days it looks like that threat might actually become a reality. On Tuesday, Dec. 11, Trump met with Democratic House Minority Leader Nancy Pelosi, Senate Minority Leader Chuck Schumer, and Vice President Mike Pence in the White House Oval Office to discuss the possible government shutdown.

Naturally, Pelosi and Schumer arrived at the White House to convince President Trump that a government shutdown wasn't the route to take, but apparently Trump couldn't be swayed. While speaking to the Democratic leaders, Trump declared that he is "proud to shut down the government" if it meant it would benefit border security. In addition, Trump claimed that he "will take the mantle" and "be the one to shut it down," implying that the Democrats could not be blamed for the shutdown. Wow, how charitable.

The holidays may be upon us, but reality doesn't stop for anyone. Let's hope that Trump can find a way to balance holiday cheer with presidential duties.

More like this
Will Johnson & Johnson's Vaccine Come Back? It's On The Way
By Rhyma Castillo
The More Contagious B-117 COVID Variant Is Now The Most Common Strain In The U.S.
By Rhyma Castillo
These Unique Gifts For Moms Are A Change Of Pace From A Bouquet Of Flowers
By Cianna Garrison
Stay up to date