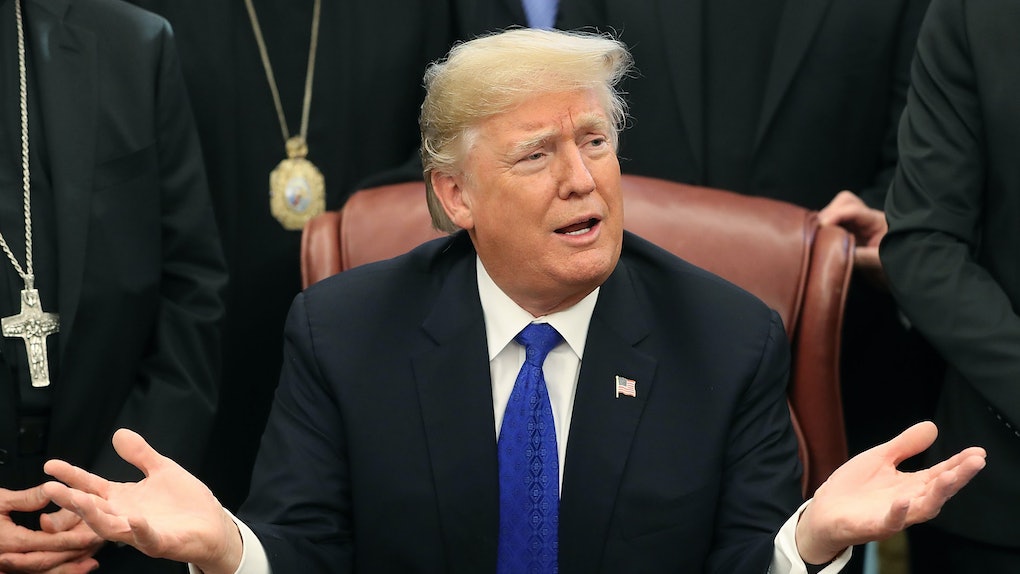 Here's Why The Government Might Shut Down Again, & It's All About What Gets Funded

The year 2018 has been such a mess so far, it only seems fitting that it might go out even messier — potentially as far as a government shut down. While President Donald Trump is fond of making grandiose statements, his latest threat to shut down the government is looking increasingly likely. So why might the government shut down, you ask? What else: Trump wants more more money for his long-promised border wall.

That's right, he's so determined to get funding for a wall along the U.S. southern border that he's said he'll shut down the government if Congress doesn't pay for it. Trump wants $5 billion to build the wall, but Democrats have only offered him $1.3 billion for border fencing and barriers, per The Boston Globe. Even though the Dec. 21 deadline to avoid a partial shutdown is inching forward, Democrats appear to be sticking to their guns, so there's seemingly a good chance that it'll happen.

On Tuesday, Dec. 11, just 10 days ahead of the deadline, Trump repeatedly threatened to shut down the government in a heated conversation with two Democratic leaders, House Minority Leader Nancy Pelosi and Senate Minority Leader Chuck Schumer. Sitting in front of cameras, Trump and Pelosi sparred over whether the House or Senate would pass his spending bill. Schumer and the president traded barbs and bickered over who would take the blame in the event that a shutdown occurs. "If we don't get what we want, one way or the other, whether it's through you, through military, through anything you want to call, I will shut down the government," Trump finally declared. He added, "I will take the mantle. I will be the one to shut it down." At one point, he went as far to say that he would be "proud" to do so in the name of border security. Here's a look at the wild moment:

He issued similar comments in a Nov. 28 interview with Politico, telling the publication that the wall would be a "total winner" for the Republican party, and that it would ensure tighter border security. He said:

I don't do anything ... just for political gain. But I will tell you, politically speaking, that issue is a total winner. People look at the border, they look at the rush to the police, they look at the rock throwers and really hurting three people, three very brave border patrol folks — I think that it's a tremendous issue, but much more importantly, is really needed. So we have to have border security.

If a decision isn't reached, Trump said, he would be "totally willing" to shut the government down — which is probably obvious, because it shut down back in January when Trump and Democrats failed to reach a deal on immigration issues. It ultimately took three long days of negotiations before the government reopened, per Vox.

It'd be great if an agreement could be reached before it gets that far this time, but, well, you guys might not want to get your hopes up. Only nine days to go.