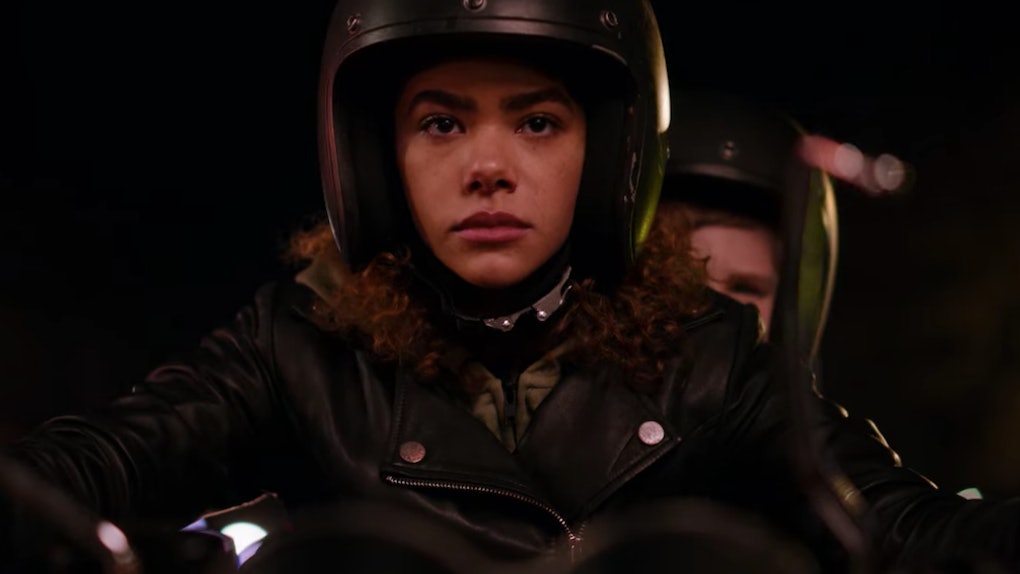 Where Does Ginny Go At The End Of 'Ginny & Georgia'? Antonia Gentry Has A Hint — EXCLUSIVE

Going into Ginny & Georgia, many fans were expecting a refreshed version of Gilmore Girls. It quickly became apparent that, despite also starring a spunky mother-daughter duo, Netflix's YA series was actually much darker. While the entire first season was full of sex and lies and secret identities, it was the final scene that really threw viewers for a loop. So, where does Ginny go at the end of Ginny & Georgia? Antonia Gentry is cuing fans into her character's next moves.

Spoiler alert: This post contains spoilers for Season 1 of Ginny & Georgia. By the end of the season, Ginny learned her mother has a dark past. After she discovered Georgia may be behind the death of her late step-father, Ginny finally seemed to decide she needed to escape from the town and from the clutches of her possibly dangerous mother. The final scene of Episode 10 showed Ginny riding away from Wellsbury on a motorcycle, with Austin holding onto her.

After Ginny and her mother seemed to have such a strong bond at the start of the series, it was pretty shocking to see Ginny (apparently) peace out during the Season 1 finale. Now, fans are desperate the know where Ginny could possibly be running away to. According to Gentry, who plays Ginny, there's actually a major clue about her destination in the scene just before she rides off. She tells Elite Daily the answer is in the details of what Ginny packed into her bag before her big trip.

"The keen eye will have a pretty safe assumption," Gentry hints. "I'll just say this: When she's packing her clothes, pay attention to what she packs. There's something that she grabs that is a clue to where she may head next."

So uh, what exactly did Ginny grab in that scene? She took a wad of cash, a book from her nightstand, and a leather jacket. If you look closely, you'll notice the jacket is the same one a gang of bikers was wearing when a young Georgia was dropped off at the state line during Episode 1. In the flashback, a female gang member asked Georgia how she got her black eye before telling her, "you win more flies with honey, but if you get yourself a bee, sting first," which later became Georgia's motto.

The gang itself is called the "Blood Eyes," and as the series progressed, it was revealed Georgia joined them. Considering Ginny grabbed the jacket and hopped on a motorcycle, there's reason to believe she might be headed to Atlanta to confront her mother's past. Since one the hardest things for Ginny to come to terms with throughout the series was her mother's mysterious upbringing, maybe she's headed to Georgia to uncover the truth about who her mother really is.

As she drove away in the final scene, Ginny said in a voiceover: "Georgia's a survivor. She had to be. But she's right — knowing some things about a person, you can't come back from that. I know what I have to do. I have to do what she's alway taught me. I have to keep running."

Until there's word on whether Ginny & Georgia will be renewed for Season 2, it's all just speculation for now. But regardless of where Ginny ends up, there's no denying she's officially a bee, just like her momma. Also like Georgia, it looks like Ginny's going to run before she gets stung.