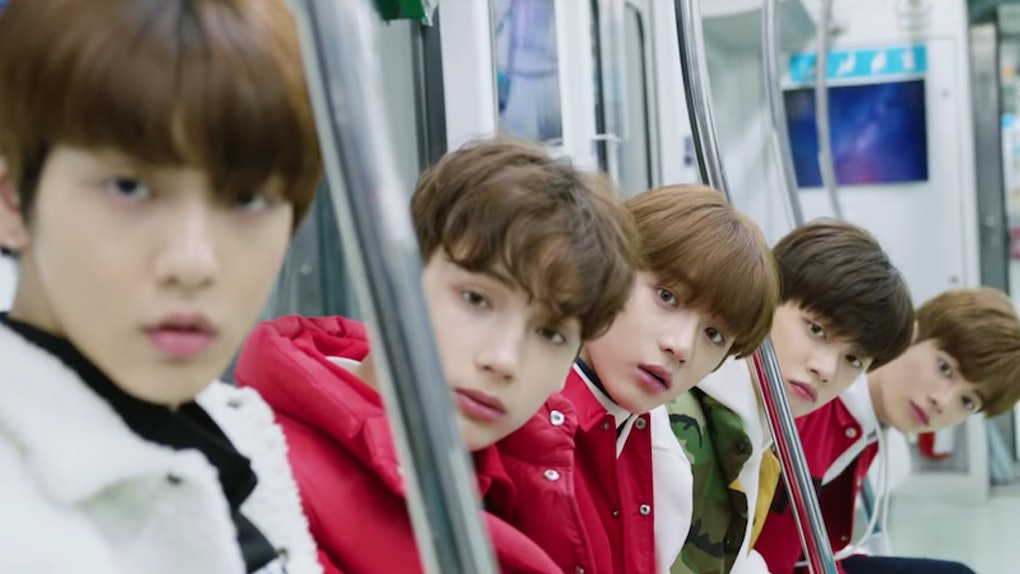 When Will TXT Be In The U.S.? Their Debut U.S. Showcase Tour Dates Are Finally Here

OK, so not only is BTS currently still on tour and about to drop their new album this Friday, but now their sibling group, TXT, is also going on tour. Does BigHit ever sleep?! BigHit Entertainment announced on Tuesday, April 9, that TXT (which stands for TOMORROW X TOGETHER) will be making their U.S. performance debut in 2019. But when will TXT be in the U.S., exactly? That date is surprisingly much sooner than fans probably anticipated.

TXT is BTS' new labelmate created by BigHit Entertainment. The group's five members were debuted in January 2019, and by March 4, Yeonjun, Soobin, Hueningkai, Taehyun, and Beomgyu had already released their debut album, The Dream Chapter: STAR. (So the answer is no, BigHit and their hardworking Idol groups never sleep.) Now, the boys are hitting the road (well, technically the air) with their first official U.S. performances lined up for the spring of 2019.

The statement then mapped out all of the stops on this mini showcase tour the TXT boys will be going on.

"TOMORROW X TOGETHER will kick off their U.S. run in New York City and will make stops in Chicago, Orlando, Atlanta, and Dallas before wrapping May 24 in Los Angeles."

"OK, so the performances end on May 24, but when do they start, Kelli?! Give us the information we need!!" I hear you yelling at me through your phones. Fine! I'll tell you!

TXT's first U.S. performance will be on May 9 at the PlayStation Theater in New York City.

Here are all of TXT's U.S. showcase dates:

And fans will have a chance to buy tickets to each of these showcases starting at 4 p.m. on Friday, April 19. Get your wallets ready, BTS ARMY.

TXT's debut album, The Dream Chapter: Star, was a short but wicked successful debut. The five-song album helped debut the group at No. 1 on Billboard's Emerging Artists chart.

BigHit's statement continued to map out the new group's immediate success. It said,

TOMORROW X TOGETHER is currently the highest-selling K-pop rookie act of 2019. With The Dream Chapter: STAR, TOMORROW X TOGETHER debuted at No.1 on Billboard’s Emerging Artists, World Albums & World Digital Song Sales charts, as well as became the highest charting debut album by an all-male K-pop group on the Billboard Top 200.

Let's be real, with a labelmate like BTS, we all knew this group was going to be successful. And now U.S. fans can join in celebrating the group's success at their U.S. showcases this May!