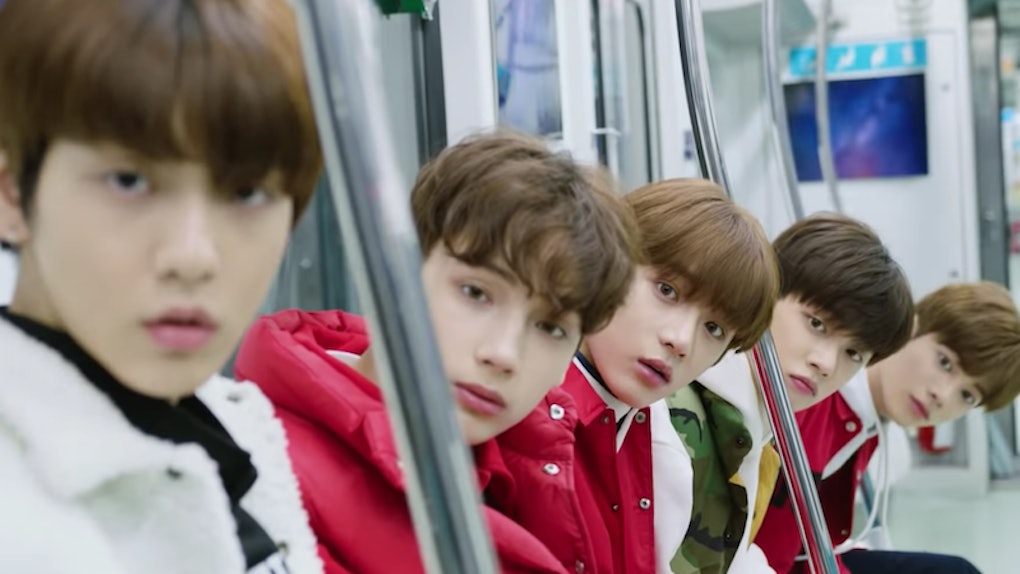 Who Is In TXT? The Band Members have All Been Revealed, So Prepare To Swoon

Wow, wow, wow. If you're here, it's because you've probably caught wind about the amazing news coming out of the K-pop world. Mega-famous BTS' label, BigHit Entertainment, just announced a new boy group called TXT, aka Tomorrow x Together, and ARMYs are freaking out. While they're certain they're going to love BTS' juniors, they just don't know who they are yet! So, who is in TXT? Write this down because you aren't going to want to forget.

TXT is made up of five guys: Yeonjun, Soobin, Hueningkai, Taehyun, and Beomgyu. According to a statement made by BigHit Entertainment, "TOMORROW X TOGETHER is a bright and youthful boy band where each member is different from one another, shining in their own way to create a synergy." As with any K-pop band, their name has deep significance, too. "Just as how their name suggests, the different members have all come together under one dream in hopes of building a new tomorrow," BitHit said.

To build hype, the label released one band member at a time but only after they created a classic debut countdown online. Without giving away the name of the group, a mysterious website appeared showing a Venn Diagram-like circle. When you hovered over it, the words, "You And I, Different But Together" appeared. Finally, on Jan. 10, TXT was revealed.

At that time, fans were only introduced to Yeonjun, the oldest member of the group. Yeonjun and all subsequent member were given their own introduction video titled "What do you do?" and featured individually running around various parts of a city.

Fortunately, the amazing videos don't end there. As a final stop on TXT's website, viewers can catch a group video which shows the guys having maybe the most fun ever...! The music is high energy, the colors are super bright, and I have serious, serious FOMO.

Of course, fans are doing some deep digging online and have put together a few theories about TXT. While nothing is confirmed, plenty of people are speculating they already know who will shine as dancers, singers, and rappers.

For example, one account thinks Yeonjun, Soobin, and Taehuyn will be rapping, while Hueningkai will take on lead vocals, and Beomgyu will bring it as a dancer with fire choreography. They also picked out some strangely specific details including some of the boys' weights and heights.

Again, nothing is confirmed, but I see where they're going with the color coordination.

Based on fan research, fans also believe the boys range in ages 16 to 19 years old, with Yeonjun coming in as the oldest (though, Soobin is the leader, apparently), and Hueningkai and Taehyun are chilling as the youngest.

Elite Daily reached out to BigHit Entertainment for comment on the fan speculation, but did not hear back by the time of publication.

I can practically hear fans already tattooing their favorite members' name on their lower back. I for one am immediately Beomgyu-bias because I think he's going to prove to be the "bad boy" of the group. I mean, hellooo! His intro video showed him running around subway stations. If that doesn't scream rebel, I don't know what does!

Honestly, it probably doesn't matter what these boys do right now. Fans are ready and waiting to love them and living for whatever happens next.