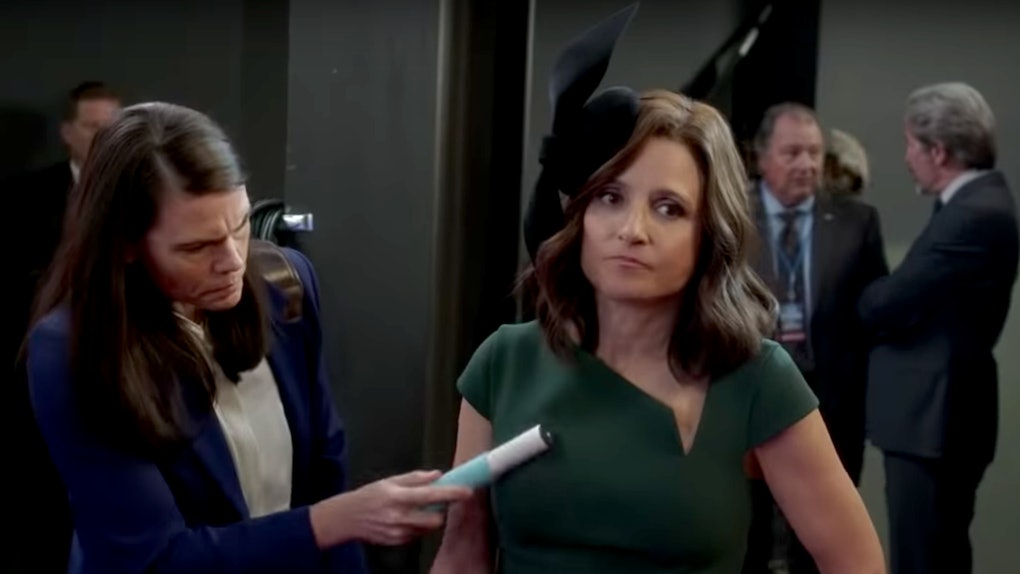 When Does 'Veep' Season 7 Premiere? The Date Was Revealed In A Filthy New Trailer

Do not expect Veep to tone down its signature scathing insults in its final season. The beloved HBO comedy series just unveiled its first look at its seventh and final season in a new trailer that dropped, fittingly enough, on President's Day, and it is just as vulgar and cuttingly hilarious as fans will remember. And for everyone wondering when does Veep Season 7 premiere, the new trailer also revealed that the final season will be here next month.

Veep fans have been waiting nearly two years now for the political comedy's big sendoff season. Its sixth season ended in the summer of 2017 on a surprising cliffhanger that promised to pit Selina Meyer against Jonah Ryan in the upcoming presidential race. The show skipped airing a new season in 2018, but now it is back for one last satirical season.

The newly released Veep Season 7 trailer shows that the farewell season will focus largely on Selina Meyer's presidential re-election campaign against her constant annoyance Jonah Ryan. Selina's scathing insults take center stage once again as she seethes about how disgusting America has become and yells about how she took a dump on the glass ceiling. We also get a peek at Jonah's very questionable campaign tactics, which include promising a group of anti-vaxxers that he will help them if elected. Most importantly, the trailer reveals that the new season of Veep will premiere on Sunday, March 31. Check out the Veep Season 7 trailer below:

Sadly, though, fans will be getting a bit less Veep with this final season than ever before. The show's seventh season will consist of only seven episodes, which is the lowest episode count of any season of Veep. If the show airs an episode a week with no breaks then the series finale should air on Sunday, May 12. This would be a potentially major night for HBO, since the penultimate episode of Game of Thrones is also slated to air on May 12 with that series finale coming the week after on May 19. So get ready to say goodbye to both Selina Meyer and Westeros within the same week this May.

The Veep cast wrapped filming for the final season back in December, and many of the cast members shared photos from the final day of production to commemorate the goodbye.

Not only has Veep become a fan-beloved popular hit since its premiere back in 2012, but the show also holds the distinction as being one of the most consistently rewarded series at the Emmys. The show has been nominated for Outstanding Comedy Series at the awards show every season it has been on the year, and has won the trophy for its three most recent seasons. Even more impressive, Julia Louis-Dreyfus has won the Outstanding Lead Actress in a Comedy Series Emmy award for every single season of Veep.

Get ready for the seventh and final season of Veep to hit your TV in about a month. Veep Season 7 premieres on HBO on Sunday, March 31.