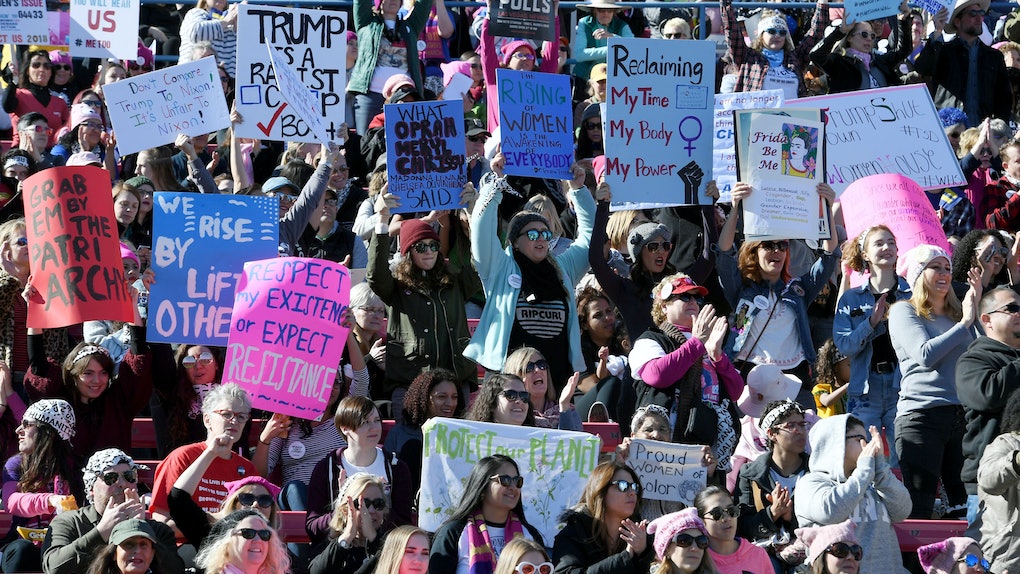 What's The Theme Of The 2019 Women's March? It's Looking To The Future

This time last year, more than one million people descended into their streets to participate in the Women's March. The 2018 event, themed “Power to the Polls," was all about getting people out and registered to vote, which seemingly inspired overwhelming voter turnout rates in the 2018 midterm elections. With that, you might be wondering: What's the theme of the 2019 Women's March? Because there are other matters around the globe that could use definitely some of that energy.

This year's theme appears to be a continuation of last year's efforts, which fueled a record-breaking amount of women into office in the Nov. 6, 2018 midterms. "The #WomensWave is coming, and we’re sweeping the world forward with us," the official statement on the Women's March website says. The statement continues:

The 2017 Women’s March inspired hundreds of women to run, millions more to vote, and dozens to win elected office. The 2019 Women’s March marks two years of resistance to the Trump presidency, two years of training new activists, and two years of building power. And this time, we're coming back with an agenda.

As always, the official Women's March will kick off in Washington D.C. It starts at 10 a.m. ET on Saturday, Jan. 19, so mark those calendars. Click here to see if there's a Women's March going on in your city.

The first Women's March occurred in 2017, just a day after President Donald Trump was inaugurated, attracting somewhere between 3 and 5 million marchers, according to The Washington Post. And it's only gaining momentum. Over the years, the event has seen tons of famous faces, including former president of Planned Parenthood Cecile Richards, Sen. Catherine Cortez Masto (D-Nevada), Rep. John Lewis (D-Georgia) and others. According to Vox, the Women's March has also helped spotlight important causes like the Me Too movement, the Black Lives Matter movement, and the Time's Up campaign.

In 2018 alone, there was an overwhelming turnout. According to a statement by March On, a women-led political organization that grew out of the first Women's March, more than 1.5 million people participated in 486 marches around the world, but other estimates place the number around 2.5 million. Both men and women poured into their streets, holding signs and singing chants expressing things they believe in, from voter registration to equal rights. And it seems like it paid off: a record-breaking amount of women were elected to the House in the 2018 midterms. Additionally, women picked up three seats in governorships, while 12 women were elected to the Senate, setting a new record of women in Congress at 117 members between both chambers.

Today, the Women's March effort defines its mission as one to "harness the political power of diverse women and their communities to create transformative social change ... Women’s March is committed to dismantling systems of oppression through nonviolent resistance and building inclusive structures guided by self-determination, dignity and respect."

Sounds like you'd better get ready, because the Women's March is coming to shake things up. Remember it goes down on Jan. 19 — save the date.