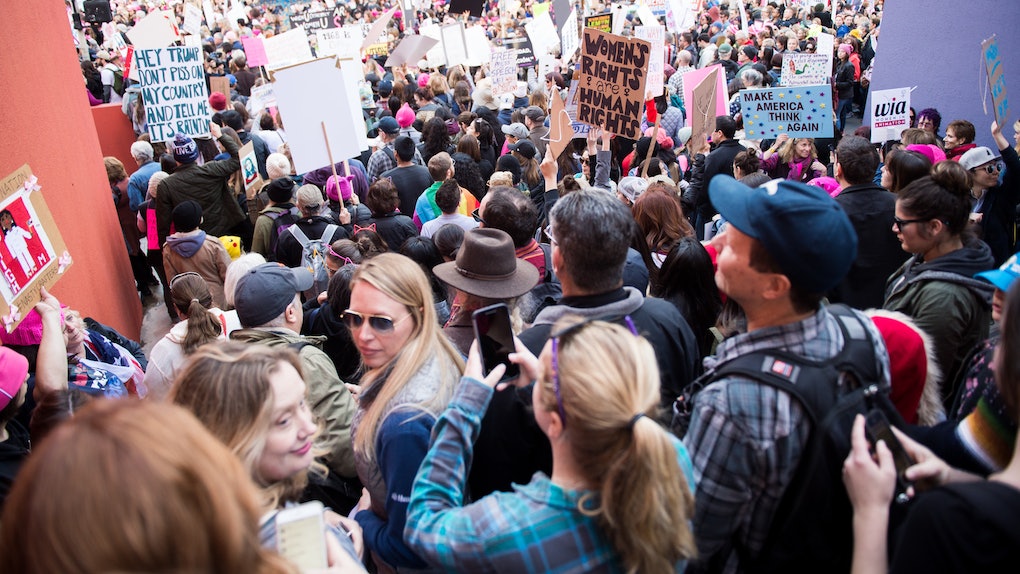 The Women's March on NYC is an incredible and emotional event, and if you attended last year's, you know exactly what I'm talking about. You probably remember not only all of the remarkable speeches, witty signs, and bright pink pussyhats, but also the empowering feeling of being surrounded by so many courageous women and feminists from around the world. And if you're unfortunately missing out on this year's empowering event, definitely make sure to check out these photos of the 2018 Women's March on NYC as they come in. To be honest, they'll make you feel so vicariously liberated.

If you weren't able to attend last year's march, the year-old photos in Time Out New York are hard proof that it was definitely what all ladies in and around the Big Apple seriously needed. After the devastation of the 2016 election, women became worried for their diminishing equality and health care. The march that followed the presidential election in January 2017 was the giant safe space we needed to let our voices be heard, along with other like-minded people seeking equality and respect. In fact, 100,000 people were predicted to show up to the Women's March on NYC in 2017, but it ended up attracting 400,000 marchers, according to Time Out New York.

The photos we've gathered so far from this year's Women's March on NYC are no less breathtaking and inspiring than those from last year. After surviving a tough year with the president, women are feeling even more empowered and strong — and it's honestly so evident from the photos. Seeing an outpour of courageous woman and feminists fighting for their rights and sharing their stories is what we all need in this nation at the moment.

If for some reason, you weren't able to make it to NYC's march this year, make it a point to look at the photos we've gathered thus far. They will make you so freaking proud of our country's women, as well as those standing up for equal rights. And we are grateful for each and every one of them.

Last year, according to Curbed NYC, the Women's March in the city started outside Dag Hammarskjold Plaza, appropriately ending just outside of Trump Towers. This year, the march route begins a little bit different, starting on the Upper West Side. A rally in Central Park will begin at 11:30 a.m. and proceed along Central Park West, heading through Midtown along Sixth Avenue. The march is set to have just as many amazing ladies (with ten times the "umph" as last year), so if you can make it to Midtown or Upper Manhattan this very second, we highly recommend it. It's truly a remarkable and unforgettable experience that you won't want to miss.

The same group who organized the Women's March on NYC last year, The Woman's March Alliance, also come through and organized the second Women's March on NYC (so seriously, mad props to them for all of their amazing hard work). Separate from the group that organized Washington D.C.'s Women's March, The Woman's March Alliance hosts a variety of educational workshops, as well as training sessions, nonpartisan events, festivals, and rallies. They're going all out, and additionally hosting Post March Events all day long. These include events such as Art Actions, plays, and a variety of other events and activities. All of the post-march events will partake throughout NYC, during and following the march — and the activities and details are specified in the discussions in the group. So guys, get pumped, because it represents a day of liberation for women everywhere.