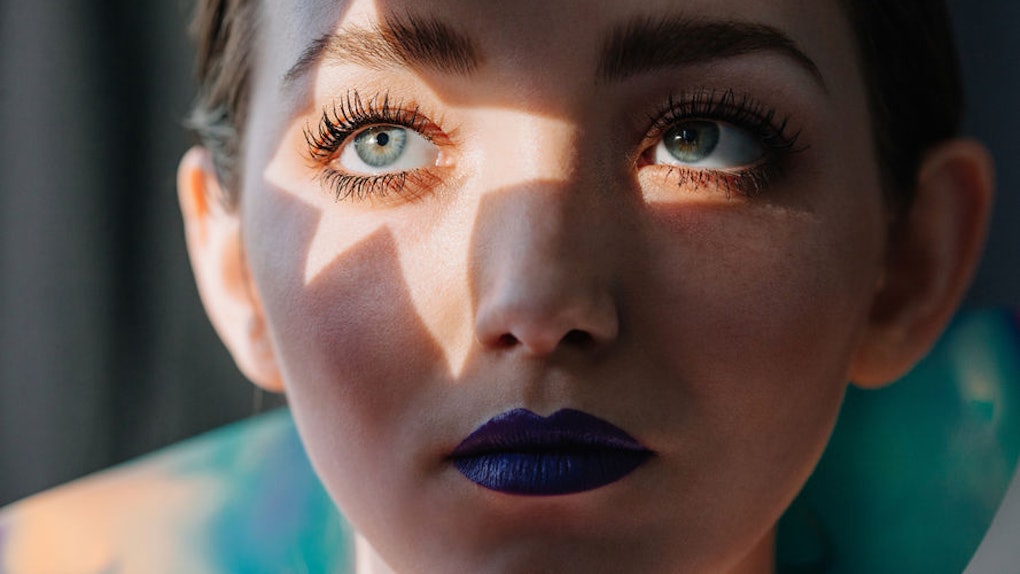 What Your Eyes Say About Your Personality, According To A New Study, Is Pretty Mind Blowing

Imagine a world in which you could stare into a potential romantic partner's eyes on the first date and immediately be able to tell what their personality is like. Honestly, I can't say if I'd even want to know that information right off the bat like that. It's such a cliché at this point, but apparently the saying "the eyes are the window to the soul" is backed up by actual science. While humans can't exactly do this kind of personality analysis just yet, some types of artificial intelligence (AI) can. And what your eyes say about your personality is pretty mind-blowing.

A new study, published in the journal Frontiers in Human Neuroscience, found that by tracking the eye movements of a person completing a normal, everyday task, an AI machine could predict, with surprising accuracy, some of the nuances of that individual's personality. The researchers began by asking 50 student volunteers to answer a series of questions, which were then used to determine their dominant personality types, as defined by four of the "Big Five personality traits." According to Psychology Today, mental health experts often use these these five personality traits — openness, conscientiousness, neuroticism, agreeableness, and extraversion — to "evaluate what are believed to be five core aspects, or traits, of an individual’s personality." For the current study, the questionnaire categorized people's personality traits by neuroticism, extroversion, agreeableness, and conscientiousness (openness was excluded — more on that in a bit).

After measuring the participants' personality traits via questionnaire, the volunteers were then sent on an errand while wearing eye movement-tracking headsets. In a somewhat creepy result, the artificial intelligence used in the study was able to accurately predict each person's personality traits, just by tracking their eye movements.

Although previous research has led to similar results, this study was unique in the sense that it tracked participants outside of a laboratory setting — which, the study's authors suggested in their paper, means their results may have been less affected by how differently a person could act under observation in a foreign environment. What's more, aside from the fact that these findings are just plain fascinating, the researchers explained in a press release that their findings could help future robots and other forms of artificial intelligence become even more capable of interacting socially with humans, and one day, these machines might even be able to read people's minds. Dr. Tobias Loetscher, a lead researcher on the study from the University of South Australia, said in a statement,

There’s certainly the potential for these findings to improve human-machine interactions. People are always looking for improved, personalised services. However, today’s robots and computers are not socially aware, so they cannot adapt to non-verbal cues.

This research provides opportunities to develop robots and computers so that they can become more natural, and better at interpreting human social signals.

Of course, you may not want to be read so easily by robots, or artificial intelligence of any kind, for that matter.

Those of us who are wary of the idea of robots becoming more independent might see some potential privacy issues with this kind of technology. "If the same information could be gained from eye recordings or speech frequency then it could easily be recorded and used without people's knowledge," neuroscientist Olivia Carter (who was not involved in the research) told New Scientist.

Of course, you've probably seen similar developments in technology popping up all over the place, like when Google debuted a new feature for Google Assistant that allows it to make phone calls and book appointments for you in an eerily human-sounding voice. What's more, in some airports, eye-scanning may soon replace boarding passes, Fortune reports. Just imagine if that eye-scanning also collected details on your personality. Pretty freaky to think about, right?

However, even if this type of AI does eventually hit the mainstream, you can still hide one part of your personality from a robot's analysis.

One characteristic that the study could not measure through eye movements was openness — aka the one Big Five personality trait that was left out of the research. According to the researchers, it's possible that either their algorithm did not pick up on the connections, or, as they wrote in their study, there's "the possibility that there is no link between openness and the way eyes are moved." But if this detail makes you feel relieved that nobody could ever tell whether you're cautious or curious just by looking at you, think again. Even your stunning summer selfies aren't exactly free from revealing things about your personality: A study published in the journal Computers in Human Behavior found that, by analyzing your selfie, someone could predict how open your personality is.

If you're thoroughly creeped out right now (same, TBH), just be glad that it's summer, and a cute pair of shades can cover up those secret-revealing eyes of yours.