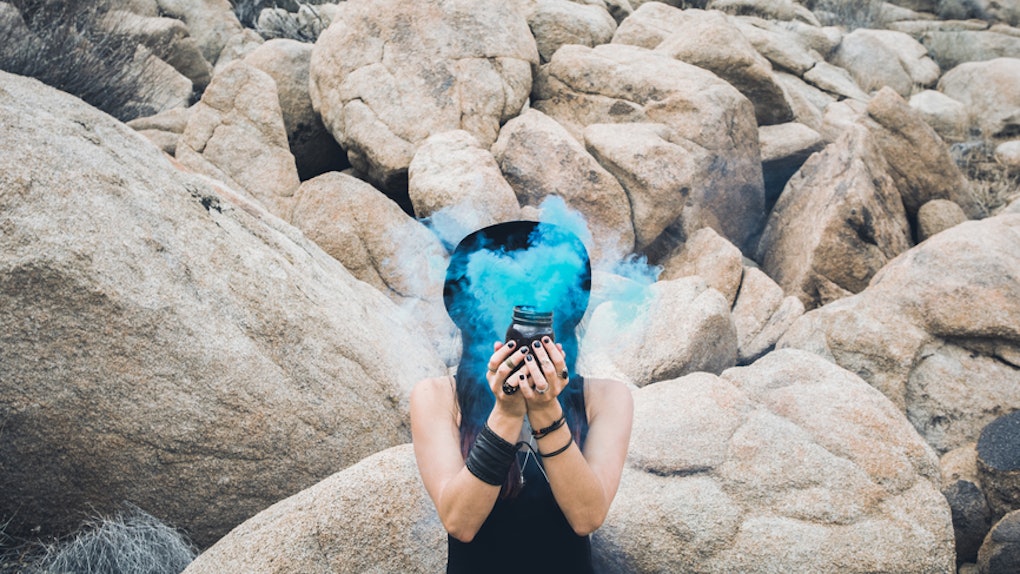 What My Birth Chart Revealed About My Sex Life Will Make You Want To Get A Reading, Too

Some people say your life is written in the stars — literally. According to astrologers, the exact placement of the planets and the stars when you're born can determine — or, at least, is strongly indicative of — both your character, and how your whole life will play out. So, when I got my own birth chart read for the very first time, I'll admit, I was a little anxious that it might reveal something awful about my future. While my reading touched on many different aspects of my life, I have to say, what my birth chart revealed about my sex life was possibly the most epic thing of all that I learned about myself.

First of all, before I get into what I learned from my specific chart, I did some research as to what getting your natal chart read actually entails, and I found some information that'll (hopefully) help you understand what this all means, and of course, it'll make a bit more sense of what I discovered in my own birth chart reading.

A natal chart reading has to do with the way the planets are situated and moving through the 12 constellations, or houses (which are all respectively ruled by the 12 zodiac signs) at the time you were born.

Your birth chart reading is also influenced by where the planets and the zodiacs are situated in the sky in the present moment, as well as where they'll be in the future, and how all of that influences who you are as a person, and where you're headed in life down the road. Astrologer Susan Miller elaborated on this on her website, Astrology Zone,

Each house governs a different area of life, from relationships, marriage, and children, to your career, co-workers, study, travel, and the home — one of them even rules your identity and appearance.

At the moment of your birth, the planets were spread out in a specific formation, each one located in a specific house. This pattern made by the planets and their locations, called the “natal horoscope”, is nearly as individual to you as your fingerprint.

Furthermore, Miller explained, when it comes to reading your natal chart, some of those houses may have been filled with planets when you were born, and others might have been empty, with nothing passing through at all, as there are only eight planets total, plus the placement of the sun and the moon. In other words, "there are not enough planets to go around" to each of the 12 houses, per Astrology Zone.

But it's cool if there are empty houses at the time of your birth, Susan Miller explained. In fact, it might just mean you don't have any difficult energy to deal with in those houses. But since the planets are continually moving through all these different houses as they orbit the sun, a house that is empty when you're born could be totally full at other times throughout your life.

OK, now that we've established what a natal chart is and all that good stuff, let's move onto what I learned from my own reading. I had my birth chart read by Canadian astrologer, Matthew Currie, who made an appointment with me to talk on the phone after I gave him the exact time and place of my birth: May 1, 1987, at 1:57 a.m., in Pasadena, California.

Before we begin our call, Currie shows me what my natal chart physically looks like. I think it looks kind of pretty, but TBH, I initially have no clue how to decipher what I'm looking at.

When we first hop on our call together, Currie tells me that, while my sun sign is Taurus, and there are general characteristics of the sign that apply to me, I also happen to have a lot of Gemini in my chart, and as an ascendent sign in Aquarius, he tells me I'm a little like "a bull that had too much coffee in the morning." Not inaccurate, I'll admit, but anyway, let's get to the juicy sex stuff you clicked on this article for, shall we?

Currie tells me, for the past two years, my romantic life has been a bit of a sh*t-show. Fortunately, he says, those days are now more or less behind me.

He also tells me that, right now, my love life is "not winning any prizes" — which makes me laugh, but also elicits a heavy sigh from deep within my chest.

I then ask Currie about a specific, and sort of confusing situation I'm currently in, relationship-wise, and he tells me it doesn't appear anything more will happen there in the coming months. He assures me this doesn't necessarily mean the maybe-relationship is doomed, but it does mean I shouldn't expect anything long-term to blossom this year. Double sigh.

But he tells me there is something that's really going to get shaken up for the rest of 2018: my sex life.

Currie tells me with a laugh that he's glad he does astrology readings mostly over the phone, as he's a little shy about getting into the details of my sex life.

Again, he tells me, while there doesn't appear to be any sign of a solid, long-term relationship in the near future, my expectations about potential love interests are going to get "re-written."

"What I'm saying is that the middle part of this year is going to bring a lot of new and interesting sexual opportunities," Currie tells me, which he explains is a direct result of the planetary transits in my chart. It's not relationship stuff, he clarifies; it's specifically about sex. It may happen within the context of a relationship, or outside of one, but one way or another, he says, "the sex is coming."

He goes on to tell me that the coming sexual experiences are going to be a "real eye-opener" about the nature of my future relationships, including the people with whom I have these relationships, as well as what I expect from them.

I can tell by his voice that Currie's having a hard time articulating exactly what he wants to say. He explains that, while a lot of this might not make a ton of sense right now, it probably will in just a few short months.

I take a breath for a moment, and then I ask him if he can give me an example of what these eye-opening sexual experiences might look like.

He tells me, if I currently have specific ideas about what I'm looking for in a partner, I might find, through these sexual encounters, that what I actually want is totally different than what I think I want.

"If you have it in your head that you want a tall accountant, you might find yourself in a relationship, or in bed with, a short musician," Currie says, to offer an example.

"I don't know if you want to admit that you are a romantic," he says, "but you really do have the capacity to pour all of your heart into a relationship."

After our phone call is over, Currie further explains over email what exactly he's looking at in my birth chart to shed all this light on my love and sex life. He tells me sex is specifically ruled by the eighth house of your birth chart, and his reading of what's in store for me shows some "very positive and helpful aspects from transiting Uranus throughout the middle of the third of this year," particularly from June to August. He adds that it seems like I'll soon undergo a process that "will help heal the issues around sex that I may have developed from my previous relationship." I may or may not experience a chill down my spine as I read that last part of the email.

I must admit, while so much of this rang true in how I actually characterize myself and my love life (and I assume even more of this reading will make sense in the future), I like to believe that everything is still up for interpretation. On that note, Currie reminds me that free will, and the sheer reality of humans being humans, does tend to complicate these things when all is said and done.

But hey, if it's really written in the stars, I suppose all will be revealed soon.

More like this
Your Mars Sign Meaning Reveals A Lot About Your Sexual Needs, So Take Notes
By Roya Backlund
12 Scents That'll Turn On Your Aries Lover
By Caroline Colvin
20 Gift Ideas For Taurus Partners That Are Thoughtful & Bull Of Love
By Kelly Pau
Stay up to date