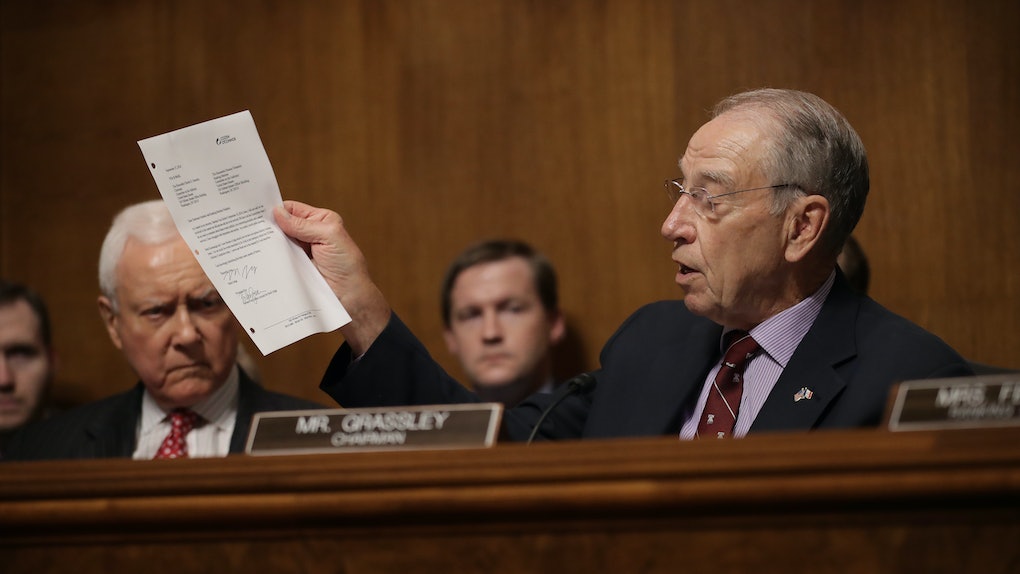 What Is The 2-Hour Rule In The Senate? Here's How It Works

When it comes to weird and obscure bureaucracy, nobody's got nothing on Congress. But with the world riveted by the hearings on Supreme Court nominee Brett Kavanaugh, everyone's getting confronted with some new terminology. Like, say, the Senate's two-hour rule, which had everyone scratching their heads after Senate Judiciary Committee Chairman Chuck Grassley cited it to end the committee meeting on referring Kavanaugh's nomination to the Senate. So, what is the two-hour rule in the Senate? Well, much like high school, the Senate has rules about how long you can take to do a given thing.

According to a Congressional Research Service report, the two-hour rule — more properly known as "Paragraph 5(a) of Senate Rule XXVI" — is a rule limiting how long committees can work while the Senate is in session. The rule states that when the full Senate is in session, no committee or subcommittee is allowed to meet for more than two hours, or past 2 p.m., without the permission of the Senate as a whole. It's intended to make sure that senators spend enough time in the actual Senate, representing the people with their votes, as well as enough time deliberating in their various committees. But while the intentions may have been good, apparently the execution is a little weird.

On Sept. 28, in the middle of an ongoing discussion about the terms of the Senate floor vote to confirm Kavanaugh, Grassley abruptly cut off the conversation by invoking the rule. Just after the committee voted, along party lines, to send Kavanaugh to the full Senate for a confirmation vote, Arizona Sen. Jeff Flake spoke up to say that his crucial swing vote on the final confirmation was dependent on an FBI investigation into the sexual misconduct allegations against Kavanaugh, in which California professor Dr. Christine Blasey Ford accused the judge of sexually assaulting her in the 1980s, when the two were in high school. Kavanaugh has denied the allegations, and representatives for the judge did not reply to Elite Daily's requests for additional comment. On Sept. 27, both Ford and Kavanaugh testified before the Senate about the allegations, in a hearing that had the country captivated and raised new questions about the judge's conduct.

Flake felt, he said, that it "would be proper to delay the floor vote for up to but not more than one week” in order to conduct the investigation. He was joined in his call by Sen. Chris Coons of Delaware, and the committee got into a (relatively) animated discussion of what types of delay and investigation would be appropriate.

That is, until Grassley, with an air of finality, cut everyone off. "Because of the two-hour rule, we're adjourned," he said, tapping his gavel lightly and standing up as the room erupted into noise. Flake, who had been continuing his point, seemed to look around with an expression of disbelief and pointed in the general direction of Grassley, who can be heard apparently talking to Sen. Dianne Feinstein, on his immediate left. "What?" Feinstein seemed to ask in surprise.

"Well is it done? Is Flake's argument — is it gonna happen?" Feinstein seemed to respond. "Or did you cut off a vote?" Grassley denied cutting off a vote.

This Senate confirmation proceeding has been a wild ride from start to finish. I guess it's no wonder that even weirdly specific rules can be turned out in the name of drama.