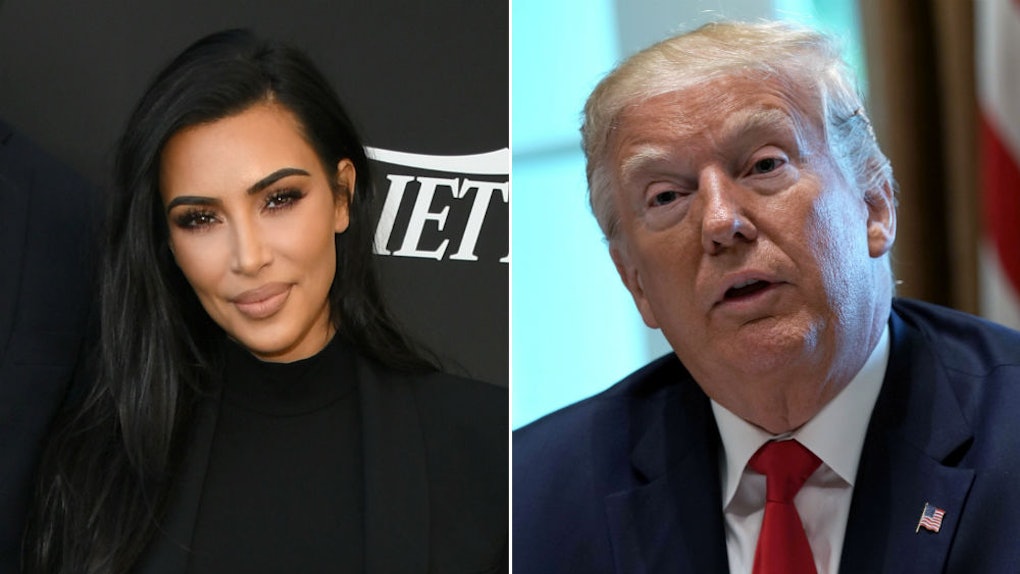 I guess this political-entertainment friendship is sticking around. On Thursday, June 13, President Donald Trump announced a series of actions that his administration is taking on prison reform, with a little bit of help from none other than Kim Kardashian. So, what is second chance hiring and re-entry? The actions are intended to help formerly incarcerated people make their way back into society after serving their sentence.

In his remarks, the president announced a number of actions to support the administration's intent to encourage businesses to expand "second chance" hiring practices for formerly incarcerated people. The initiative, per a White House press release, will include actions like making federal job listings available to individuals in federal prisons, connecting employers directly to former prisoners, expanding access to educational grants in prisons, and creating incentives for employers to hire formerly incarcerated people. The White House did not immediately respond to Elite Daily's questions about further details of the initiative.

Trump also acknowledged Kardashian herself, sitting in the front row, and her efforts on prison reform. Kardashian, along with Trump's son-in-law Jared Kushner, had advocated for the the First Step Act, criminal justice reform legislation which was signed into law in December 2018. Among other things, the legislation retroactively eliminated the disparity in crack and cocaine sentences, eased requirements for mandatory minimum sentencing, and made it easier for prisoners to reduce their sentences for good behavior. "Jared and Ivanka were incredible and they really pushed it," the president said. "And I think they were being pushed a little, also, by Kim Kardashian. So thank you, Kim," he said.

Kardashian herself also took the podium and spoke to announce a ride share partnership to help formerly incarcerated people find and keep employment, noting that a lack of transportation can stand in the way of re-integrating into society. "People want to work," she said at the event. "So I'm happy to announce we have a new ride share program, where formerly incarcerated people will be granted gift cards that they can use to go to job interviews."

According to a July 2018 report from the Prison Policy Initiative (PPI), the unemployment rate for formerly incarcerated people is an average of five times higher than that of the general population, and job candidates are likely to be discriminated against by employers. The report also noted that formerly incarcerated people were more likely to have low-paying or part-time work, meaning that even those who were working were potentially vulnerable to economic instability. Private initiatives have attempted to address the issue before through campaigns such as Ban The Box, an effort to remove questions about prior convictions from employment applications. However, the combination of the White House and one of America's biggest reality stars might give this effort some extra weight.

In her remarks, Kardashian also paid tribute to the woman who got her interested in criminal justice reform in the first place: Alice Marie Johnson, who was given a life sentence for a nonviolent drug crime. Johnson was granted clemency by Trump in June 2018 after a White House visit from Kardashian. "I pled the case of Alice Johnson, who the president granted clemency to," she said in Thursday's speech. "After that, I really spent so much time going to different prisons, because I really had no connection to anyone on the inside. I really felt for me like I am at the place in my life where I really wanted to make a difference and do the right thing." Kardashian has since begun studying law.

So, what's next for this prison reform power duo? Well, it seems like they won't be slowing down their efforts anytime soon. Here's to change — and an unlikely pairing.