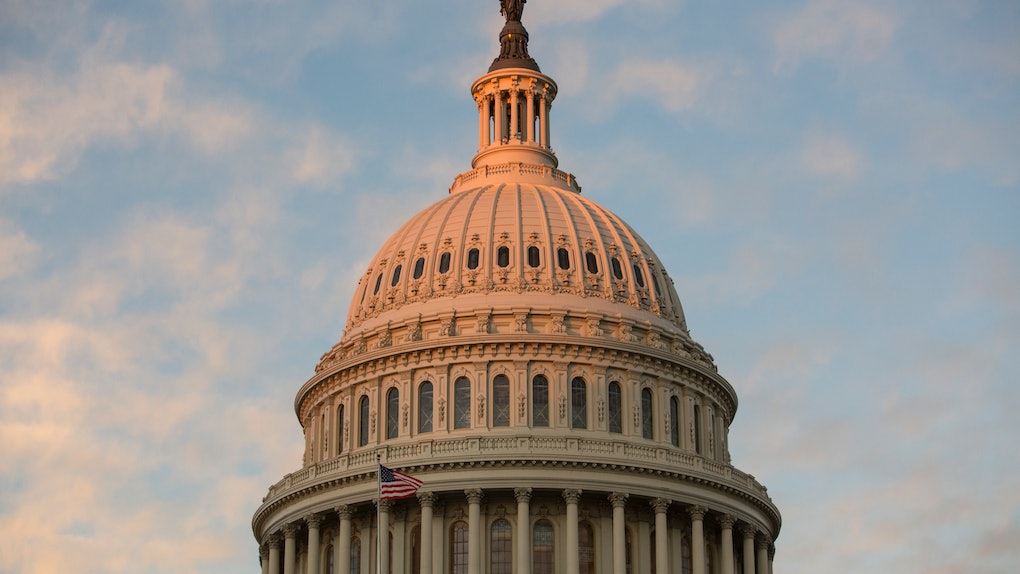 What Is The First Step Act? This Bipartisan Bill Focuses On Criminal Justice Reform

As 2018 comes to a close and 2019 is right around the corner, it's time to start making some changes in the new year. Well, it looks like the Senate shares my sentiments, and they just passed a bill that could seriously impact the future of the criminal justice system. So, for all of you asking: what is the First Step Act? It looks like Democrats and Republicans have finally come together for a good cause.

Late on Tuesday, Dec. 18, the Senate passed the First Step Act, which is a bipartisan bill that focuses on criminal law reform. The bill, pushed by a bipartisan set of senators, was passed by a 87-12 vote. So, what does the First Step Act do? According to NBC News, the bill aims to reduce prison overcrowding, reexamine inmates' current sentences, possibly grant early releases, and overall "make America's criminal justice system fairer," per NBC. The bill will now go through the House, where it has a solid chance — a previous version of the bill passed 360-59.

The bill does a number of things per Vox, including retroactively eliminating the disparity in crack and cocaine sentences; easing requirements for mandatory minimums and giving judges more leeway in sentencing, which could lead to shorter prison terms; and increasing "good time credits," which will allow model prisoners to shave time off their sentences.

This bill is a major shift in criminal justice reform, but it's hardly a sweeping overhaul. The bill will only cover federal prisons and prisoners, which only make up about 10 percent of the United States' prison population. As for state prisons, which make up an overwhelming majority of the prison population, this bill won't cover those prisoners.

Nevertheless, the willingness of both parties — not to mention the White House — to reach across the aisle on the issue is a positive sign. Not only was this bill supported by both Democrats and Republicans, but it even got the green light from President Donald Trump and was advocated by his senior adviser (and son-in-law) Jared Kushner. Before the Senate officially passed the bill, Trump openly expressed his support for the First Step Act back in November. So, once the bill was passed on Dec. 18, Trump immediately took to Twitter that night to discuss the impact this bill will have on America's criminal justice system, saying that it will "keep our communities safer, and provide hope and a second chance, to those who earn it."

According to a July 2018 report from CNN, the United States currently has the highest incarceration rate in the world, with over 2 million adults held in state prisons as of the end of 2016. In addition, the United States spends $80 billion on prison facilities each year, compared to, say, the Department of Eduction's budget of $68 billion.

Following the passing of the First Step Act, a number of political commentators, activists, and others stepped up to express their support. However, when it comes to politics in 2018, there always has to be a little shade involved. On Wednesday, Dec. 19, CNN commentator Van Jones praised the bill on New Day, and proceeded to call its bipartisan passing a "Christmas miracle," which considering the current tension between Democrats and Republicans at the moment, seems just a little shady.

Shade never changes, but when it comes to criminal justice it looks like things are happening. I don't know about y'all, but 2019 might actually look semi-promising.