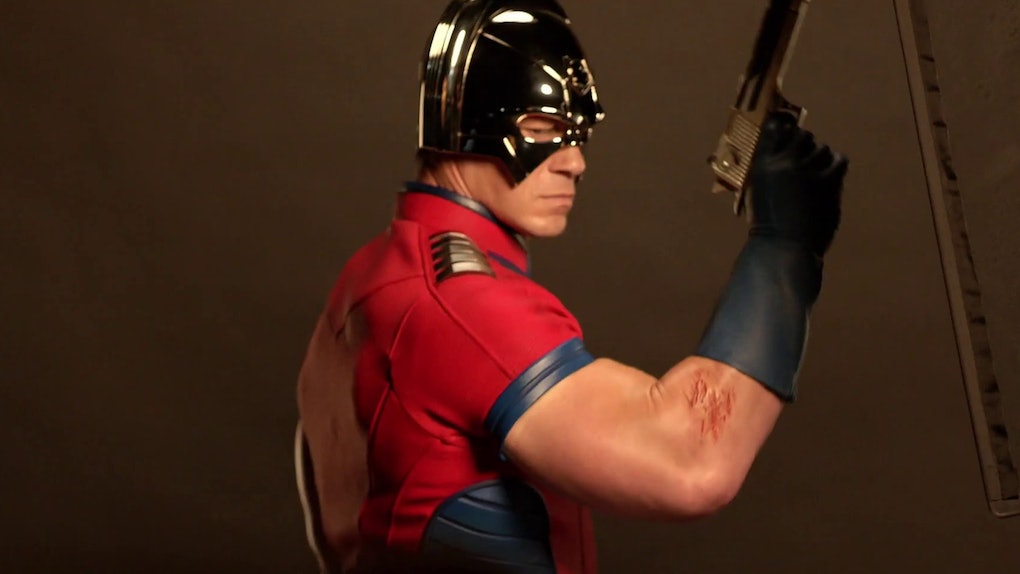 What Is 'Peacemaker'? John Cena Will Star In HBO Max’s 'Suicide Squad' Spinoff

The rise of streaming services run by significant production studios may seem like a decision based solely on challenging Netflix's current supremacy. And on one level, it makes sense: Why give your content to someone else to stream for money, when you can stream it yourself? But it's also an opportunity for storytellers to link big and small screen projects, like Marvel Studios creating shows like WandaVision for Disney+. Though HBO Max does not share a moniker with studio Warner Bros, they're still sibling companies, and big-screen films can beget small screen shows like Peacemaker. But what is Peacemaker? It's a spinoff of the upcoming The Suicide Squad starring the one and only John Cena.

One could argue series like WandaVision are low-risk, as they're based around characters from proven hits. (All four of the crossover Avengers films are in the Top 20 Highest Grossing Films of All Time.) But with success stories like Star Wars' The Mandalorian dominating headlines, HBO Max is apparently gung-ho to get moving on spinoffs of films that have not yet hit theaters.

The streamer has already greenlit Gotham P.D., a series based on 2021's The Batman, the latest version of the Caped Crusader's adventures starring Robert Pattinson. The film has not even finished principal photography yet, so Warner is presumably trusting in the franchise, creating spinoffs sight unseen. Now comes Peacemaker, a series based on the as-yet-unreleased, not-exactly-a-sequel to 2016's Suicide Squad, The Suicide Squad.

The original David Ayers film starred a reasonable level of five superheroes banding together as a team, including Deadshot (Will Smith) and Harley Quinn (Margot Robbie). But James Gunn's "reimagining" of the group is far broader, with no less than 16 superheroes all told, including four of the original five stars. (Will Smith is not returning.)

With so many characters, it was probably inevitable at least one would get a spinoff. Harley Quinn already has a popular cartoon, so how far behind could a live-action series be?

Not far, it turns out. Producers have decided to focus a series on Peacemaker, played by former WWE star Cena. James Gunn is directly involved with the spinoff, including writing all eight episodes of the first season, meaning it'll almost definitely tie in closely with the upcoming film.

But without a movie to explain the character, fans might ask, who is Peacemaker? It turns out, he's an ironic character from the DC canon, described as "a master of weapons who believes in peace at any cost — no matter how many people he has to kill to get it." As Gunn explained it:

Peacemaker is an opportunity to delve into current world issues through the lens of this superhero/supervillain/and world's biggest douchebag.

Cena is mostly known for tough-guy roles, but his real talent lies in comedy (I mean, have you seen Blockers?), and this sounds like it could be the perfect marriage of both.

There is no date for Peacemaker's release, though most assume it will not arrive until after The Suicide Squad's theatrical debut. The Suicide Squad is currently scheduled to be released in theaters on Aug. 6, 2021.