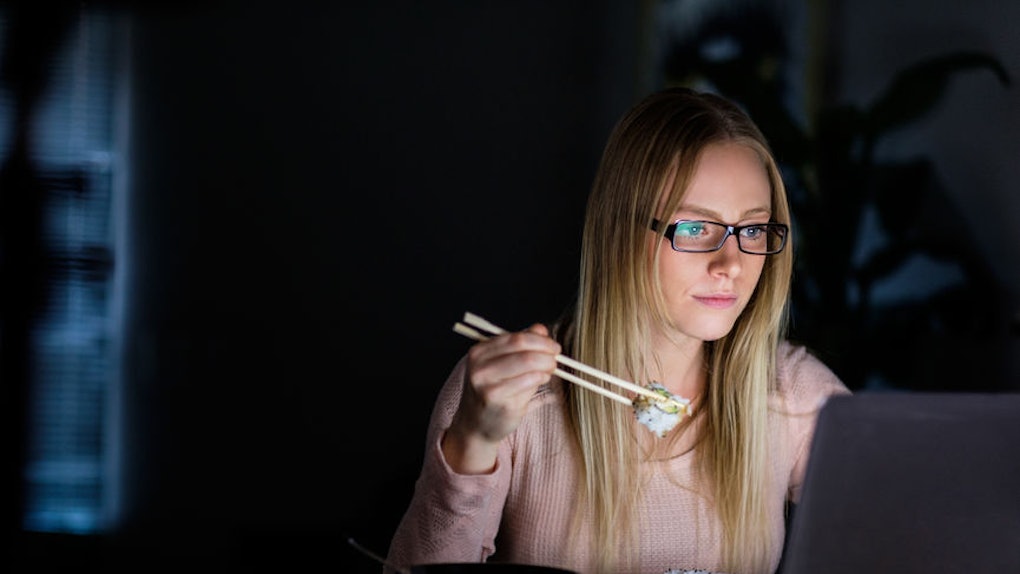 What Is Nightfood? These Bedtime Treats Are The Healthiest Way To Satisfy Sleepy Cravings

You tap your smartwatch to view the time, and the digital numerals flash 1:15 a.m. You really should have been fast asleep hours ago, but your digestive system seems to be causing a ruckus under the sheets. You ate a well-balanced dinner, as per usual, but now your stomach’s demanding something sweet. You know for a fact nighttime snacking is never a good idea, especially on a night like tonight when there’s a fresh plate of homemade brownies on your kitchen counter, so what’s a girl to do? Well, if you don’t know what Nightfood bars are yet, you might want to get on board with this better-for-you bedtime snack, because sleep scientists say nibbling on these bad boys late at night could be a better option for your body.

Does anyone else have a drawer in their fridge dedicated to all things chocolate? No? Just me? Well, TBH, that’s the first place I look for a nighttime snack. I’m a chocoholic by nature, and every night at 9 p.m. like clockwork, my body’s practically aching for anything made from or covered with cocoa. Maybe your nighttime vice is a slice of pizza topped with extra cheese, or a bowl of Lucky Charms — either way, all the simple carbs and sugary treats your body yearns for late at night are nothing it really needs. Luckily for us, the snacking gods have shown us a fraction of mercy with Nightfood bars that are literally food you can eat at night without the risk of sacrificing sleep.

Nightfood bars are the late-night snacking hero your stomach needs and deserves at 1 a.m., but before I get into why they’re amazing, let's talk about what’s causing your craving in the first place.

Have you ever stopped to think about why you’re always hungry at night? There’s actually a laundry list of reasons why your hunger cues kick in long after dinner is done, and no, it isn’t because your body actually needs a sleeve of Oreos dunked in a glass of ice cold milk, or better yet, peanut butter (thanks for that delicious tip, Lindsay Lohan). It could be that you’re not getting enough of the necessary nutrients your body needs to thrive and stay satiated for 24 hours, or perhaps you’re just bored AF, so thinking about food is enough to make you crave it, or maybe you’re just not eating enough during the day, period. Of course, science says you could always blame your ancestors for passing along their poor habits of eating anything at any time of day, but that’s another article for another day.

But here's the thing: Per sleep doctor and creator of Nightfood, Dr. Michael Breus’ findings, if you typically eat food that’s very lean and super healthy during the day (which, yay for you), you’re probably going to end up craving and eating sugar at night, just because your body is reacting to the lack of carbs and sugars during the day. It makes sense, right? Breus also tells Elite Daily that your body craves foods that are high-fat and high-calorie at night because these are the types of foods that "produce serotonin [the neurotransmitter that makes you sleepy] to help lower [the stress hormone] cortisol." In other words, late at night, your body sort of mimics a bear going into hibernation mode: It’s going to want to stock up on calories, and sugars, and all those good-yet-not-so-great food groups, for the simple fact that it just "doesn’t know when you will eat again," Breus says.

Personally, I’m all for listening to your body, eating intuitively, and honoring your hunger cues — but, just because you crave a Snickers bar before bed every night, doesn’t mean the ingredients in a Snickers bar are actually good for your body. There’s always something underlying there. For example, let’s just say you, like me, are forever looking for something chocolate at night. This might be a sign that your body is lacking in magnesium. And the tricky thing about chocolate is it has caffeine in it, so while taking a few bites might feel good at the time, tossing and turning from a sudden jolt of energy won’t, and according to Dr. Breus, the same goes for foods high in protein.

“If you eat foods too high in protein, you’ll experience a surge of energy and alertness, which is how your body is supposed to process protein — obviously that is counterproductive if you are trying to fall asleep,” Breus tells Elite Daily, adding that snacking in general can be risky if you aren’t eating the right foods, because what you eat directly affects how you sleep.

And so, in the quest to help curb late-night cravings with something that's just as delicious as it is nutritious for your body, the Nightfood bar was born.

So now that you know pretty much everything there is to know about what you shouldn't eat right before bed, let's get to the good stuff: what you should eat. Now, granted, if you want to indulge in a pint of Ben & Jerry’s cherry garcia before you snooze, it’s really not my place to slam your freezer door shut and reprimand you. What you chow down before clocking in some shut-eye is your business, but if you’re looking for a healthier alternative that can actually help you sleep better than you would after a couple of spoonfuls of ice cream, hear me out.

According to Breus, Nightfood bars encompass everything you want from a late-night snack: It tastes sweet without unnecessarily being pumped with added sugars, it's high in fiber (five to six grams), low in sugar (eight to nine grams), with more calcium, magnesium, and less sodium than your average slice of cake or cookie. Nightfood bars are basically the ultimate alternative to satisfying your cravings with something decadent, while also being mindful of what's going into your body and how these ingredients will affect your sleep cycle.

"What’s special about Nightfood is what they leave out as much as what they put in," Breus tells Elite Daily. "You’ll feel full, you wont have eaten an unhealthy snack, and you won’t have trouble falling asleep."

More like this
These Creative #EcoHacks On TikTok Encourage Green & Waste-Free Living
By Marisa Casciano
40 Wine Puns For Captions, To Give Your IG Feed A Taste Of The Good Life
By Jasmine Vaughn-Hall
These Virtual Mother's Day Cooking Classes Offer Tasty Gifts Mom Can Enjoy At Home
By Rachel Chapman
Stay up to date