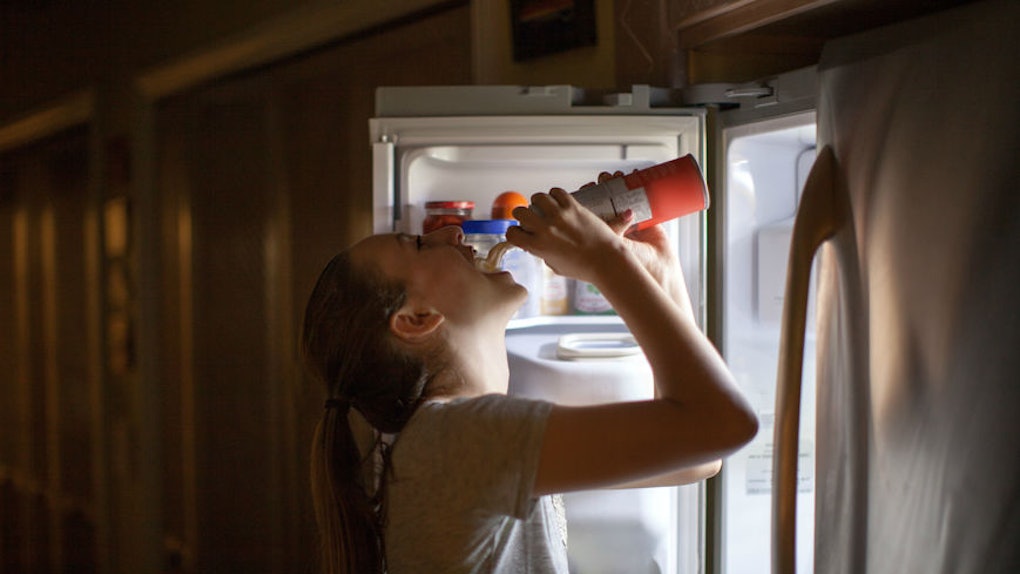 Why Am I Always Hungry At Night? Experts Say It Has A Lot To Do With Your Daytime Habits

It’s 11:45 p.m. and you’re seconds from crawling under the covers when you’re suddenly overwhelmed by a strong craving for Oreos and peanut butter. Granted, it’s possible this dire need for chocolate cookies smothered in nut butter is your body's reaction to watching Lindsay Lohan combine the two during a rerun of The Parent Trap (again), but if this isn’t the first time you’ve gotten out of bed for a snack, you might be wondering why you’re always hungry at night, and why it’s usually for something decadent. Listen, I sympathize: I’d definitely call myself a nighttime grazer, but if your body is giving you hunger cues at night, every night, there might be more to it than a case of unyielding sweet tooth.

Let’s say you typically eat a decent-sized supper, but it really doesn’t matter what you ate or how much food your meals consisted of — you’re consistently starving by 9 p.m., night after night. I know myself, and I actually think my tendency to mosey on over to the kitchen come nightfall happens out of habit. I come from a household where, growing up, my family sat down to dinner at a set time, and would indulge in a little dessert at another set time. This isn’t to say my husband and I don’t have structure when it comes to our meals, too, but I’ve definitely noticed he’s not always up for a nighttime treat in the same way I always am.

Science says late-night hunger could actually be genetic, so you may be able to thank your ancestors for those midnight cravings.

Back in 2013, researchers from Oregon Health & Science University and Harvard University teamed up to figure out if your tendency to eat more at night has anything to do with your circadian rhythm, aka your body’s internal clock that ticks and tells you when it’s time to go to sleep and wake up. The study was published in the journal Obesity, and found that it doesn’t necessarily matter how well you eat during the day, how much, or even when; if you’re always hungry at night, it could very well be a reflection of your ancestors' eating habits.

Now you might be wondering, how is it even possible for your stomach to behave the same way the stomach of your caveman brethren operated? According to Prevention, the researchers involved in this study came to their conclusion by taking a group of volunteers and housing them in a hotel-like lab where their cellphones, TV, and internet privileges were taken away for two straight weeks. They weren’t even allowed visitors or friends, so basically, all they could do was sleep or eat. The lights were strategically dimmed so that participants couldn’t tell the difference between daytime or nighttime, and for the duration of their stay, experts evaluated their sleep and eating habits. It turns out the participants were actually hungriest at nighttime, regardless of when they slept or woke.

As fascinating as this research is, though, experts say your ancestors aren’t totally to blame. If you’re always hungry at night, it might be a reflection of your own eating habits.

In an interview with Elite Daily, Jessica Rosen, a certified holistic health coach and co-founder of Raw Generation, says that, per ancient Ayurveda wisdom, your body functions best when it gets the bulk of its nutrition before 2 p.m., because that’s when it’s believed your body and mind are working their hardest and need the most fuel. Basically, Rosen says, if you’re particularly parched or starving come nightfall, it’s probably because you either a) didn’t eat or drink enough earlier in the day, and/or b) you didn’t nourish your body with enough essential vitamins and minerals. In that case, pay close attention to what foods you’re craving at night, and figure out what that means in terms of nutrients.

“When we crave sweets like chocolate, it is thought that our bodies are deficient in magnesium, and craving cheeses and meats are from iron and calcium deficiencies,” Rosen tells Elite Daily. “The healthiest and fastest way to get an optimal amount of minerals is to drink green juice with as much dark green leafy vegetable juices like spinach, kale, or collards as you can comfortably drink.”

Another issue might be that you aren't eating enough of a variety of different food groups. There's a reason why your doctor suggests eating a well-balanced diet and drinking a ton of water: It's because all of these different food groups will collectively nourish your body and keep you satiated. So take notice of the amount of proteins, healthy fats, and high-fiber foods you're eating throughout the day, health coach Jessica Cording MS, RD, CDN, INHC, tells Elite Daily. Cording suggests trying not to fill up on too many simple carbs (think sugary treats like cookies and cereal), because "your body burns through [them] really quickly."

But let's say you've made absolutely sure you've incorporated a wide variety of different fruits, veggies, and complex carbs into your diet. You ate until you were comfortably full at every meal, and you made sure to follow a schedule. If, despite taking all the necessary precautions, you're still hungry at night, Mitzi Dulan, RD, CSSD, says you're probably just bored.

"[Nighttime] is usually a time when people get hungry because they’re bored," Dulan tells Elite Daily. "Oftentimes it’s more of a boredom hunger because you’re sitting in bed and your mind wanders, and you think about food." So, pretty much me in a nutshell? OK cool.

So now that you probably have a good idea as to why you're always hungry at night, here's what you should eat when the cravings strike.

Listen: I'm not going to fault you for indulging in a little somethin' sweet late at night, because that's usually what I'm craving, too. But let's be ~responsible adults~ here for a moment, and talk about what you should actually be snacking on late at night when the munchies are too real.

I hate to burst your bubble, but Grace Derocha, a registered dietitian, certified diabetes educator, and certified health coach at Blue Cross Blue Shield of Michigan, tells Elite Daily that while you should definitely take your cravings into consideration, the later it gets, the healthier your snack should be so that your body isn't struggling to break things down overnight. Snacks that are light, but still delicious, such as cottage cheese and fruit, apple slices dipped in peanut butter, carrots and guac, or even a smoothie, are all options here, says Derocha. The goal is to eat something nutritious and delicious so your cravings are curbed and you can go to bed feeling satisfied.

More like this
These Creative #EcoHacks On TikTok Encourage Green & Waste-Free Living
By Marisa Casciano
These Virtual Mother's Day Cooking Classes Offer Tasty Gifts Mom Can Enjoy At Home
By Rachel Chapman
40 Wine Puns For Captions, To Give Your IG Feed A Taste Of The Good Life
By Jasmine Vaughn-Hall
Stay up to date