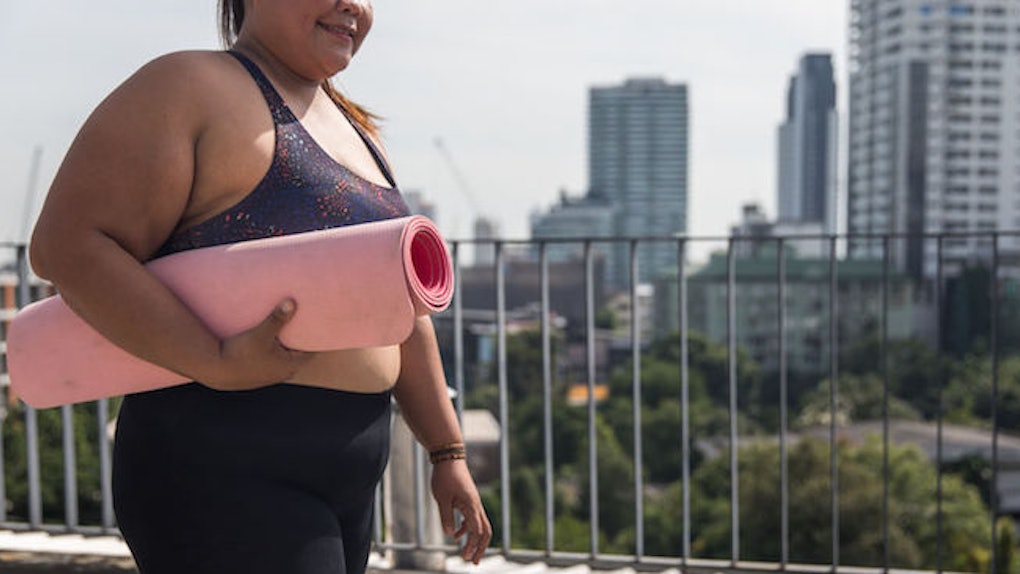 What Is Mindful Movement? Science Says This Type Of Workout Is An Easy Way To Release Stress

For some people, the mere thought of hitting the gym for a workout is a huge turn-off, and for others, it's their go-to way of relieving stress. If you're not really into fitness, then I'd imagine the last thing you want to do after a long day is go for a run or lift some weights. However, that doesn't necessarily mean you can't enjoy the same, stress-busting benefits of exercise that others do; it might just mean you have yet to discover what mindful movement is.

Mindful movement is something that sounds way more complicated than it actually is. In the simplest terms, mindful movement is a great way to check in with your body and what it's asking for in terms of physical activity, rather than forcing it into something you feel like you "should" be doing. So instead of using challenging workouts to disconnect from your mind and shove negative thoughts aside, mindful movement encourages you to be intentional about and aware of every move you make, and to focus on the quality of your movements and how they make you feel.

It sounds like the best possible way to approach a workout, and according to the results of a new study, it kind of is the best way to exercise. The study, which has been published in the journal Psychology of Sports and Exercise, revealed that being mindful of your breathing and surroundings during a workout is an extremely effective way to manage stress and improve your overall well-being.

This isn't to say movement in general isn't great for your body. Rather, when you incorporate this element of mindfulness, it takes the benefits of exercise to the next level.

What's more, the study found, mindful movement may be especially helpful for people who don't have time for a full fitness routine in their schedule, like busy college students, or anyone whose work hours are unpredictable from week to week. According to the researchers, if you're moving your body throughout the day — whether you're walking from class to class or hustling back to your apartment after work — it pays to be mindful and aware of your surroundings, rather than, say, tune it all out and scroll through your phone the whole time as you go from point A to point B, day in and day out.

The researchers discovered this by recruiting 158 students from Penn State University, who were then told to download an app called Paco, which prompted the participants to answer a series of questions about their state of mind and how active they were at random points over the course of two weeks. After analyzing the students' responses, researchers found that people seemed to feel their best when they "were more mindful or active than usual," according to ScienceDaily. But it was the combination of being both active and mindful that resulted in the most powerful "decrease in negative affect," Chih-Hsiang "Jason" Yang, a lead researcher on the study, said in a statement. In other words, when the students were moving their bodies (whether they were walking to class or going for a run at the gym) and maintaining a mindful awareness of their movements, that was when they reaped the most benefits, at least as far as stress relief and well-being are concerned.

So while mindfulness (i.e. something like seated meditation) and physical activity (such as going for a walk or a run) are both great on their own, when you put the two together, you get an incredible strategy that can help you manage day-to-day stress in a simple, yet really effective way.

The simplicity of mindful movement is astounding, and it's something that literally everyone can incorporate into their everyday lives.

For instance, your daily dose of mindful movement can be as simple as leaving your phone at home and taking a short stroll around your block. During that walk, you could lean into the mindfulness element by practicing deep, belly-focused breathing, and checking in with how it feels for your feet to rhythmically hit the pavement one after the other. You could experiment with a slower or faster pace to find what feels good for you, or you could even go barefoot to really amp up the experience for all of your body's different senses. Moving mindfully is all about presence, so if you find your mind wandering to thoughts about the past or worries about the future, simply return to the rhythmic tapping of your feet carrying you on your walk to help you stay anchored in the present moment.

Moving mindfully can also entail something a bit more complex, like a fluid yoga flow. The combination of breath and movement during a yoga practice encourages you to nurture the mind-body connection that's so central to mindful movement, and rest assured, you don't even have to be on your yoga mat that long to experience these benefits. Simply focus on moving through a few stress-relieving poses, link them with some expansive inhales and exhales, and your brain and body will do the rest, my friend.

More like this
25 Instagram Captions For Workout Pics & Being A #Boss In The Studio
By Marisa Casciano
Can I Exercise After A Flu Shot? Experts Recommend Listening To Your Body Post Vaccine
By Georgina Berbari
I Tried Working Out With A Kardashian Trainer & Now I Never Want To Be Famous
By Rachel Varina
Stay up to date