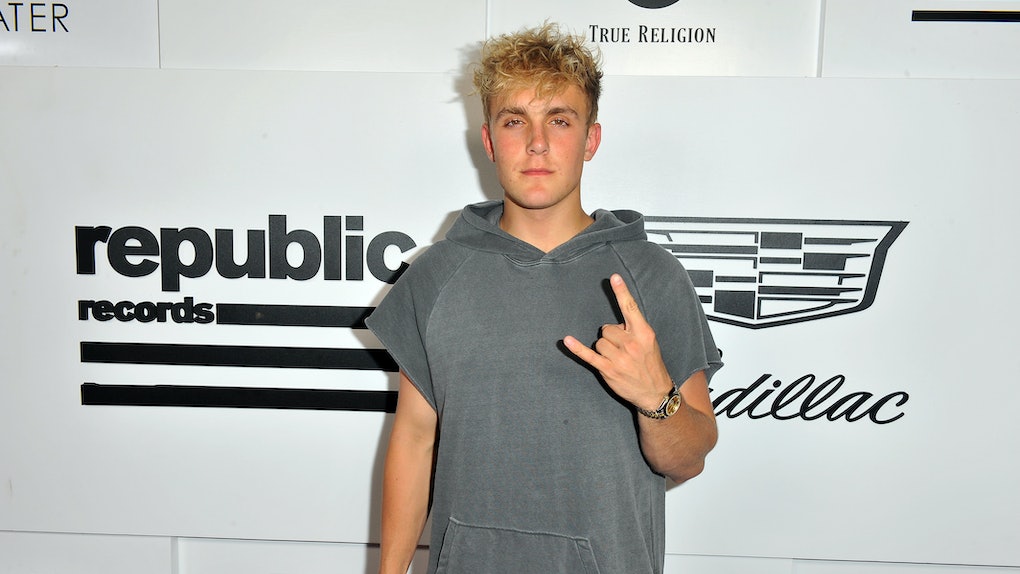 What Is Jake Paul's Net Worth? It'll Make You Question Your 9-To-5 Job

Ah, the Paul brothers. While Logan Paul is still being ridiculed for his previous mistakes, Jake Paul is making himself known in the world of teeny bopper culture by continuing his vlogging career. But if you want to feel really, really bad about yourself today, rest assured that Jake Paul's net worth is hundreds of thousands of times more than mine will ever come close to... and as a hard working gal, it's a major slap in the face.

Jake Paul, the 21-year-old younger brother of Logan Paul, initially gained fame back in 2013 when the Vine app was available and in its prime. He and Logan competed to make the most popular Vine videos, according to Metro, which resulted in Jake obtaining over 5 million followers. When Vine shut down, the internet celeb transitioned to YouTube, where he acquired an impressive 11 million subscribers.

Until the summer of 2017, Jake Paul actually starred in a Disney Channel show called Bizaardvark, but he and Disney ended up officially parting ways in July 2017. Despite this obstacle though, the internet celeb's net worth is estimated to be $7.5 million as of 2018, per Metro, and I personally don't think that's fair... but whatcha gonna do, I guess.

Metro attributes Jake's surprisingly high net worth not only to each of his acting roles and YouTube videos, but also to his merchandise and brand endorsements, as well as his business ventures. TBH, maybe it's time for me to make YouTube videos... but I'm not entirely sure that I would actually be able to achieve his level of hyper obnoxiousness, if I am being brutally honest. Oh well.

If Jake Paul's shocking net worth doesn't tear you apart, then Logan Paul's net worth probably will. Logan Paul's YouTube stardom actually outshone his brother's (that is, until the suicide forest video incident). Regardless, though, Logan Paul's net worth is still unbelievably high, and I'm so jealous. Logan Paul reportedly made $12.5 million in 2017, according to Forbes. Reportedly, he makes $150,000 per Facebook post and $80,000 for Instagram sponsored content. Damn you, internet fame — you sure make 9-to-5 jobs seem pretty bleak. This kind of stomps on my last bit of remaining pride, if you catch my drift.

Although they compete for internet stardom, the brothers definitely seem to look out for each other's fame... especially when it came to Logan Paul's highly controversial Japanese suicide forest video. Jake actually made an apology video for his brother's wrongdoing, and in all honesty, it was super awkward. The 13-minute video was titled, "YouTube, Let’s Talk About Brother Logan Paul..", and although it seemed like it'd be some sort of reflective piece, it consisted mostly of Paul constructing a snowboarding ramp and pranking his friends. It was then followed by a couple of minutes actually relating to his brother's mistake. He said,

As his brother and as someone who knows him the best, I do feel it's necessary to say something about it, or give my perspective about it. I think what Logan did was very, very, very wrong and he made a huge mistake. Not only is he paying for it, but he is learning from it.

Logan Paul also apologized for his Japanese "suicide forest" video with a tweet on Jan. 1, 2018 and a video the following day.

An excerpt from his initial apology tweet says, "This is a first for me. I've never faced criticism like this before, because I've never made a mistake like this before. I'm surrounded by good people and believe I make good decisions, but I'm still a human being. I can be wrong. I didn't do it for views. I get views. I did it because I thought I could make a positive ripple on the internet, not cause a monsoon of negativity. That's never the intention."

So it seems that Jake Paul makes, well, quite a bit of cash off his colorful personality. And whether or not you love the Paul brothers, their net worths are pretty unbelievable — which, TBH, I'll never live up to. While it might be difficult for some of us hardworking folk to fathom that Jake actually works hard (based on his outlandish videos), his net worth is certainly nothing short of magnificent. Maybe I'm just jealous, but I am also kind of suspicious as to how he actually attained his fame and fortune. Oh well, at least he's having fun along the way.