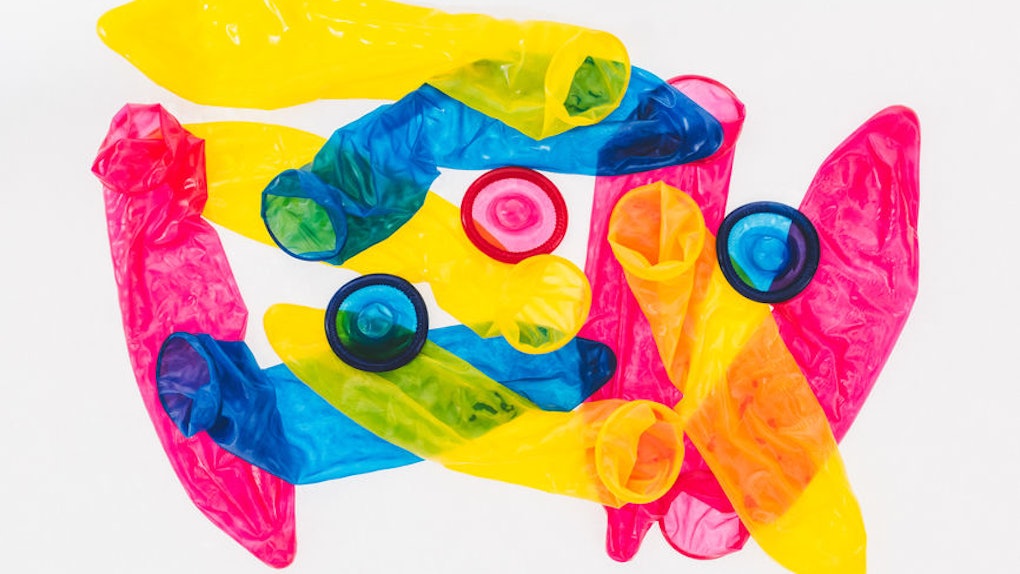 What Is An Internal Condom? Here's Everything You Need To Know

There’s no denying that condoms are one of the most common, accessible, and affordable methods of birth control. But did you know that there are multiple kinds of condoms — and furthermore, that you don’t have to have a penis to wear one of them? The internal condom may not be as widely used, but it’s still a phenomenal option to consider in terms of practicing safe sex. In fact, it has many benefits over a traditional condom. So, what is an internal condom? And why should you consider trying one?

An internal condom is a pouch that is inserted into the vagina, and is larger than a traditional condom. The pouch features two flexible rings at each end: one that’s slightly larger at the open end and one that’s smaller at the closed end. According to the American Pregnancy Association (APA), the larger ring rests outside of the vagina, against the vulva, and the smaller ring is designed to keep the condom securely in place. This contraception method forms a barrier, shielding the inside of the vagina and preventing sperm from reaching the egg. As a result, the internal condom can prevent both an unwanted pregnancy as well as the transmission of sexually transmitted infections. It’s important to note that while internal condoms have long been referred to as “female condoms,” people of any gender can use them during sex.

Why might you consider an internal condom? There are many advantages to this birth control method. According to the National Health Service (NHS), these condoms are 95 percent effective when used correctly (those last three words are key). An internal condom is also the only other birth control method aside from traditional condoms that can significantly reduce the risk of transmitting an STD. They’re small, portable, discreet, and you do not need a prescription to obtain them. Since they’re typically made of either polyurethane or nitrile, they’re a perfect option for those with a latex allergy. And according to the APA, internal condoms are less likely to break or cause an allergic reaction than traditional condoms.

Unlike traditional condoms, during penetrative sex, internal condoms can stay in place whether or not the penis remains erect. Perhaps one of the most unique perks that comes with using internal condoms is that because you can insert them ahead of engaging in foreplay or having sex, you can get down to business without having to interrupt the moment. Best of all, internal condoms allow anyone with a vagina to take charge of their sexual health. In other words, they allow users to protect themselves against an unplanned pregnancy as well as STDs and STIs, even if their partner doesn’t want to wear a condom.

As for the drawbacks to internal condoms — there aren’t many. However, it’s worth noting that internal condoms tend to be more expensive than male condoms — according to the APA, they cost approximately five times more than male condoms. Also, the APA reports that the outer ring can potentially cause some irritation on the outside of the vagina. Some users experience a distracting popping or crackling noise when using an internal condom, but according to the Palo Alto Medical Foundation, that probably just means you need more lubrication. Of course, one of the main pitfalls is that they may require a little trial and error to insert properly. The step-by-step how-to guide by Planned Parenthood breaks down everything you need to know about how to use an internal condom. Remember: The more you use them, the easier it will be. It’s a great idea to try inserting the internal condom a few times before actually using it during sex to ensure it’s as effective as possible.

So, what else do you need to know about internal condoms? The most important thing to know is that you should never use an internal condom in conjunction with a traditional condom, according to the Centers for Disease Control and Prevention (CDC). You might think doubling up makes sex safer, but actually, using both types of condoms can cause friction that makes them more susceptible to tearing or breaking (thus reducing their effectiveness). Internal condoms are disposable, and shouldn’t ever be reused. You must insert it before the penis makes any contact with the vagina, but according to MyHealth Alberta, you can place it in the vagina up to eight hours before intercourse. Before using an internal condom, the CDC recommends checking the expiration date, making sure there are no tears or defects, and using lubricant to prevent it from tearing or slipping out of place. Some internal condoms come pre-lubricated, but you can definitely use additional lube.

Internal condoms are convenient, relatively easy to use, and offer a number of advantages over traditional condoms. The key, of course, to ensuring that they are effective, is learning how to use them properly. Also, it’s worth mentioning that while you can’t use internal condoms with traditional condoms, you can use them in conjunction with a birth control pill to reduce your risk of getting pregnant. Internal condoms may not be as widely available as traditional condoms, but they are becoming increasingly accessible in pharmacies, at clinics, and online. Note that the FC2 Female Condom® is the only internal condom brand that’s currently FDA approved and available in the U.S. You can purchase them online on the FC2 website, as well as at some Planned Parenthood health centers, family planning and health clinics, and drugstores. While this over-the-counter form of contraception is covered by most insurances when prescribed by a physician, you can also purchase the FC2 Female Condom with no prescription and pay out of pocket.