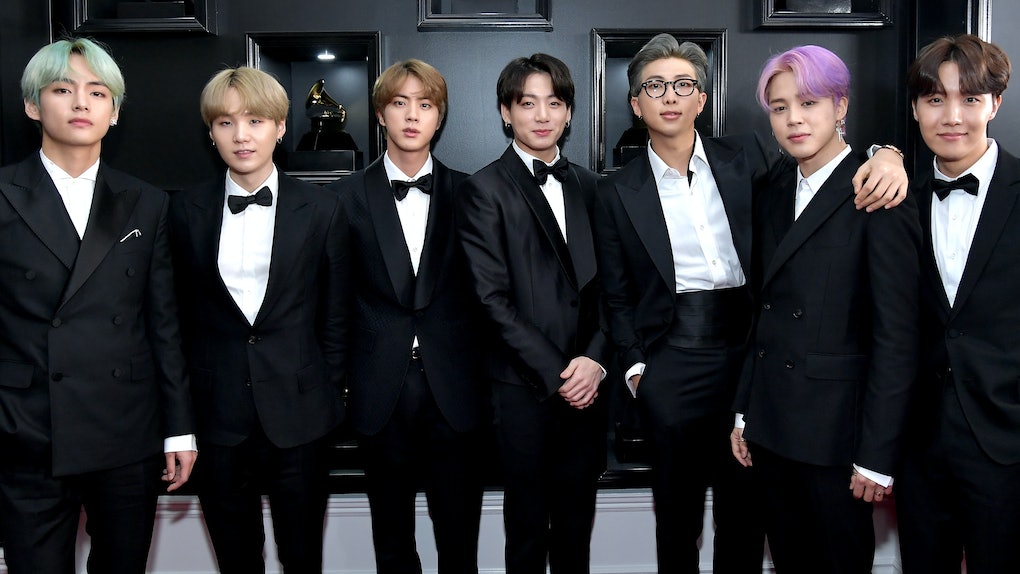 What Is BTS' April 2019 Schedule? Their 'Map Of The Soul' Comeback Has Them So Busy

I've always known I don't know what it takes to be a celebrity, but I certainly have not even one idea of what it takes to be a K-pop idol. BTS' calendar is packed full of travel, performances, and appearances all over the world, and one or two film and album releases — and that's just in the month of April. ARMYs who keep up with Jin, Jimin, Jungkook, J-Hope, RM, V, and Suga might be asking what is BTS' April 2019 schedule now that Map of the Soul: Persona is on its way. The answer is: busy AF.

One thing I always wonder about is jet lag. The boys will be jet-setting from Thailand, to New York City, to South Korea all in the span of fewer than 10 days, which means they're spending almost as much time on airplanes as they are in front of cameras and fans. Along with the detailed schedule below, ARMYs can also anticipate the final two issues of BTS' Save Me webtoon to drop on April 3rd and April 10th, and new episodes of Run BTS every Tuesday and Thursday on V-LIVE throughout the month.

OK. Do you guys have your planners out?

April 5 & 6: Love Yourself concerts in Bangkok

The boys continue their world tour, taking their Love Yourself show to Thailand. The tickets sold out fast, but thaiticketmajor.com explains they "re-collected those that have been canceled or purchased via unauthorized routes" to make room for any ARMYs who still want to attend. (Hurray, Bangkok fans!)

Duh. This is the big one. The comeback album has already sold about 2.6 million in pre-sales and will be officially drop on April 12. If you haven't already ordered the album in pre-sale, you can scoop it up at any major retailer where CDs are available or listen to it on all major streaming services when it drops on April 12.

Another first for the gang. BTS will be joining that week's Saturday Night Live host Emma Stone as the famous American television show's musical guest. Presumably, they will be performing new songs off of Map of the Soul: Persona, though my fingers are crossed for "Idol," too! Based on past appearances by boy bands on the show (lookin' at you, 1D), we might even get treated to an appearance by the boys in a skit as well. (Please, please, please!)

If, for some unknown reason, you have yet to catch BTS' epic concert film, Love Yourself in Seoul, it will now also be available on Blu-Ray. The movie follows the group's opening performance in their home country and makes you feel like you're sitting front row for this iconic tour.

I did some digging and The Fact Music Awards celebrate both artists and their fans. One promo poster states, "Artists to shine! Fans to enjoy! FAN N STAR Festival." BTS will be attending the event but will not perform, according to reports.

BTS will be celebrating the upcoming 18th Fina World Aquatics Championships by headlining Seoul Broadcasting System's (SBS) Inkigayo Super Concert as part of the opening events. Listen, I don't know if I'd naturally pair K-pop and aquatics, but these guys can get me hyped for anything.

And all of this is just in April. And who knows what BTS could add to their ever-changing schedule in the coming weeks?!

Bookmark this article for easy reference or tattoo the calendar to your forehead. You don't want to miss anything these guys have going on!