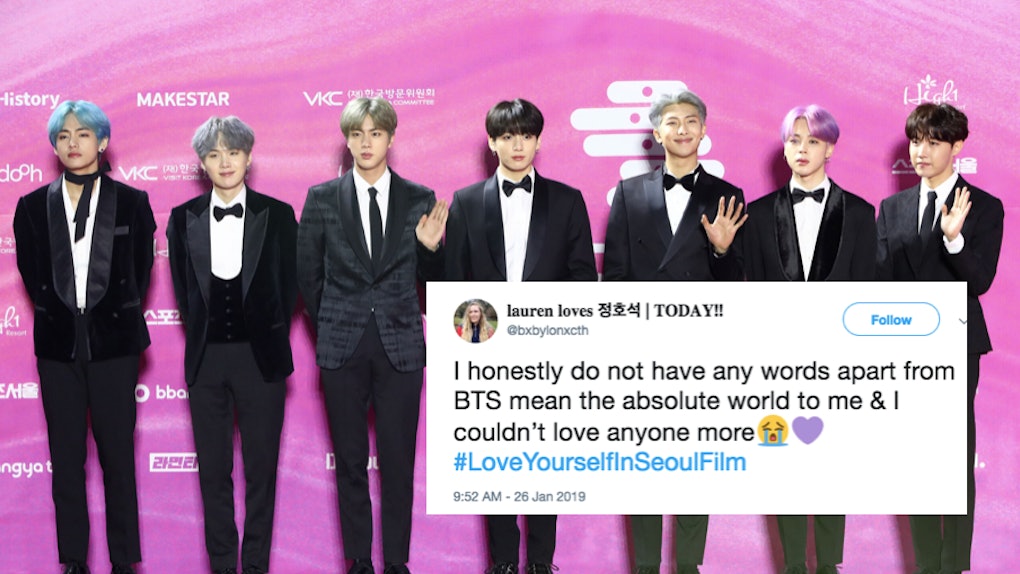 Among other successes and newsworthy moments BTS has already had in 2019, the boys now star in their own concert movie which hit theaters on Saturday, Jan. 26. It seems like there's nothing world-famous K-pop band can't do and fans are definitely freaking out about this latest release. These tweets about BTS' Love Yourself in Seoul movie show how obsessed, dedicated, and emotional fans are about the new release.

The two-hour film was released worldwide on Saturday, Jan. 26, and it is only slated to be in theaters for one day. The film, which was shot in Olympic Stadium in Seoul during the BTS Love Yourself World Tour, showcases "the seven members of the global boyband and their unprecedented international phenomenon," per Fathom Events. The 30-second trailer gave fans a taste of what they can expect to see in the film, which includes performances by the boys themselves, a packed stadium, close-up moments of their favorite BTS members, incredible choreography, and lots of music. The official announcement flyer from December 2018, revealed that the movie will give fans a big screen look at the "jaw-dropping and thrilling performance of the Seoul concert that marked the grand opening of the tour."

Naturally, BTS fans have already started tweeting their reactions to the concert film. Twitter user @seokjinnie_ah wrote, "Your movie really is the cure for broken-hearted army who cant go to your concert. Thank you!" Another Twitter user @Nila_Casoyla noted, "The movie made us feel like we're in the actual concert! The best movie screening I have experienced so far!"

Here are some more reactions from fans who have already seen or who have yet to see the film.

According to Korean pop culture website Soompi, Love Yourself in Seoul was the No. 1 film in terms of "real-time ticket sales" for the week of Jan. 19, which was a week before the film's release. Soompi also noted that the film is the largest-ever worldwide release of an "event cinema" movie. With the film being shown in 3,800 theaters in 95 countries, it's clear how global the BTS phenomena actually is.

The official announcement for the film was posted back on Dec. 13, 2018 on BTS' Twitter page. It noted that the film was produced by Big Hit Entertainment and CJ CGV Screen X, along with other details like where to buy tickets, when it would be released, and who would be featured in it.

Clearly, ARMYs are hype about this film, but Love Yourself in Seoul isn't even BTS' first concert movie. In November 2018, the band released Burn the Stage: The Movie in about 70 countries, per Soompi. According to Burn The Stage's official website, the movie provided fans with a behind-the-scenes look at the Wings Tour, in order to share all the details of how these K-pop sensations rose to fame. ARMYs also got an "intimate look" at how BTS was able to break in to the mainstream music scene. According to Soompi, Burn The Stage drew in two million people worldwide, and from the Twitter reactions to the band's latest concert film, it's clear that Love Yourself in Seoul also resonated strongly with its global audience.